Trainer Charles Byrnes handed six-month suspension after his horse was given a sedative ‘by an unknown person’ to STOP it winning… after one punter bet £31,000 that it would lose

Cheltenham Festival winning trainer Charles Byrnes has had his licence suspended for six months by the Irish Horseracing Regulatory Board after one of his horses tested positive for a banned substance.

The Byrnes-trained Viking Hoard was pulled up at Tramore on October 18, 2018, after which a urine sample was found to contain hydroxyethylpromazinehydroxide (HEPS), a metabolite of acepromazine (ACP), which is a sedative.

ACP is a prohibited drug under the rules of racing and following Byrnes’ request to test a B sample, the finding was confirmed.

The IHRB hearing was told of suspicious betting patterns surrounding the run of Viking Hoard which had been flagged to the Irish racing authorities by the British Horseracing Authority.

The hearing was told of two other races in which lay bets had been placed on Viking Hoard. In all three instances the lay bets were initially placed via a limited liability company.

A link was pointed out to an individual known to be associated with the combined account and said to be ‘based in a distant part of the world’ and to be be ‘associated with match fixing and associated betting in connection with other sports’.

However, there was no evidence to connect Byrnes with these betting patterns.

Evidence was heard from various officials and Byrnes himself, who ‘taking into account the gravity of what occurred’ was fined £891 (€1,000) alongside his six-month ban.

However, the IHRB added it had ‘been advised that the trainer will be lodging an appeal against this decision’.

The IHRB Referrals Commmittee hearing was held via Zoom on January 7, with the authority informing Byrnes of its decision on Monday before issuing a 14-page written judgement to support its conclusions. 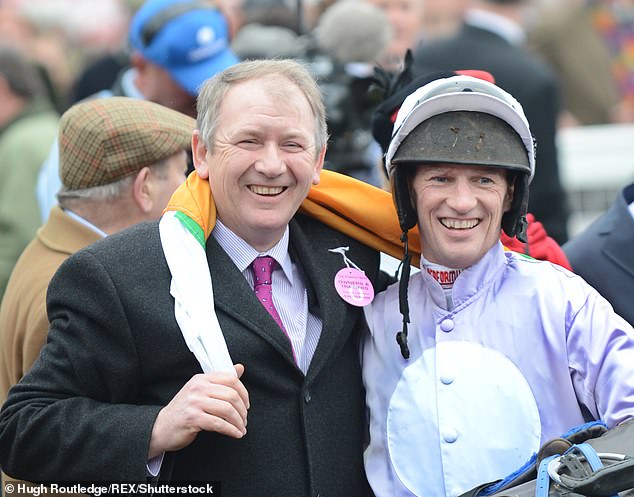 The committee heard that Viking Hoard drifted from odds of 4-1 to a starting price 8-1 for the Waterford & Tramore Racecourse On Facebook Handicap Hurdle, with the horse receiving a reminder after jumping the first before being pulled up before the seventh hurdle, with Byrnes’ charge described to have run ‘conspicuously badly’. 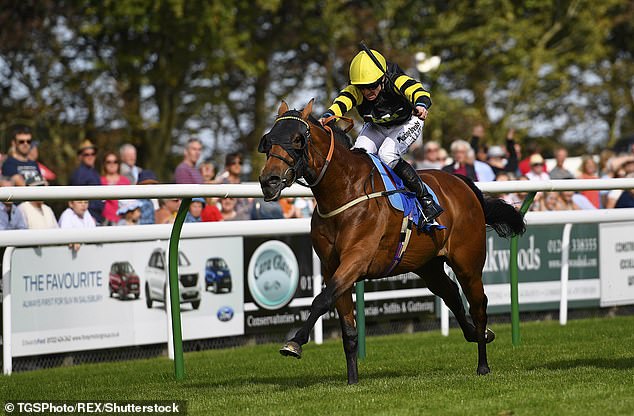 The Byrnes-trained Viking Hoard (pictured in 2017) was pulled up at Tramore on October 18, 2018, after which a urine sample was found to contain a sedative

The Referrals Committee decided ‘the evidence showed that Viking Hoard was subject to a dangerous degree of sedation during the race, and the committee came to the conclusion the horse had been “nobbled” by an unidentified third party when left unaccompanied’.

Cliodhna Guy, IHRB head of legal, licensing and compliances, submitted that while ‘it was not alleged that Mr Byrnes was directly involved in either the administration of ACP or the betting patterns, he had taken risks in discharging his responsibilities under the Rules that resulted in an extremely serious outcome from the perspective of the IHRB’.

The committee concluded Byrnes was ‘seriously negligent in the supervision of Viking Hoard of the day of the Tramore race’ and ‘significant actual damage flowed from the neglect of the trainer’ – financial damage for punters and ‘reputational in the case of the racing industry’.

In handing out the suspension, the committee said Byrnes had ‘indulged in an unacceptable level of risk-taking in the supervision of his charge on a race day’ and concluded a minimal sanction was not suitable as ‘the facts and consequences of this case passed any such threshold’.