New York Liberty guard Layshia Clarendon, who is nonbinary and transgender, has announced they have undergone ‘top surgery’ to remove their breasts.

The WNBA star, who prefers the pronoun ‘they’, shared the news on social media Friday along with photos taken after the procedure which they revealed took place earlier this month.

Clarendon, who married wife Jessica Dolan in 2017, announced the birth of their first baby, which Dolan carried, on Christmas. They haven’t announced the name or sex of the baby, which the couple called ‘#babyC’ on social media.

Meanwhile, Clarendon took to Instagram to express their joy after becoming ‘free’ of breasts.

‘On Jan 13th at 10am I hugged my wife in front of my surgery building, walked in and took a deep breath…The day was finally here. The day I got to have Top Surgery!!!!!!! ,’ Clarendon wrote in an Instagram post.

‘It’s hard to put into words the feeling of seeing my chest for the first time free of breasts, seeing my chest the way I’ve always seen it, and feeling a sense of gender euphoria as opposed to gender dysphoria. Sighhhh…freedom… freedom at last.’ 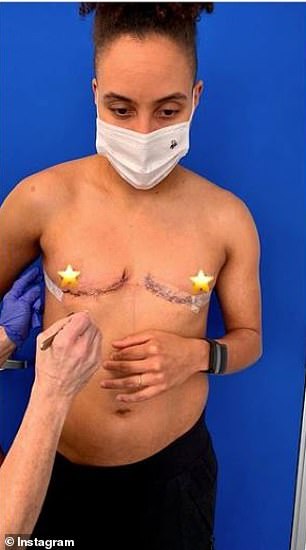 New York Liberty guard Layshia Clarendon, who is nonbinary and transgender, announced Friday they underwent ‘top surgery’ to remove their breasts on January 13 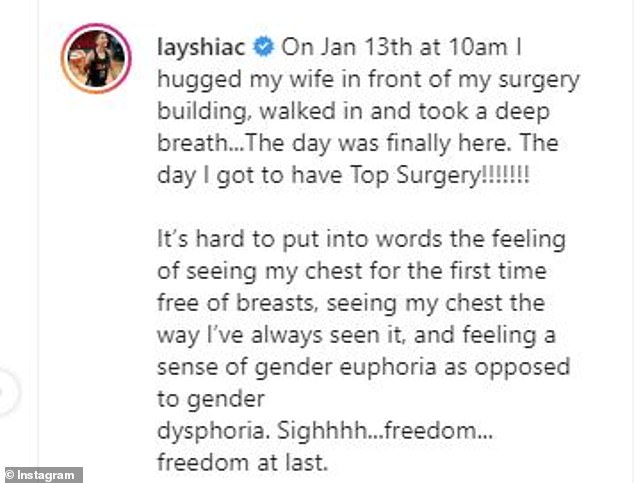 Clarendon shared the news on Instagram on Friday. They described feeling a sense of ‘gender euphoria as opposed to dysphoria’ after the procedure

Clarendon, 31, has been generally open about their identity but admitted they felt apprehensive about disclosing the news due to ‘the amount of hate, myths & ignorance.’

‘I want Trans people to know and see that we’ve always existed & no one can erase us! I want people to remember that my freedom is your freedom because none of us are free until we are all free!!!’ they added.

‘Layshia’s story is one of inspiration and courage, and as a takeaway from the emotional conversation we shared recently, my hope is that the WNBA’s full support will extend far beyond this league,’ WNBA Commissioner Cathy Engelbert said.

‘We are so proud that Layshia is part of the WNBA and we know that their voice and continued advocacy will not only support and help honor and uplift many other nonbinary and trans people, but also encourage empathy and understanding for the community across all levels of sport.’ 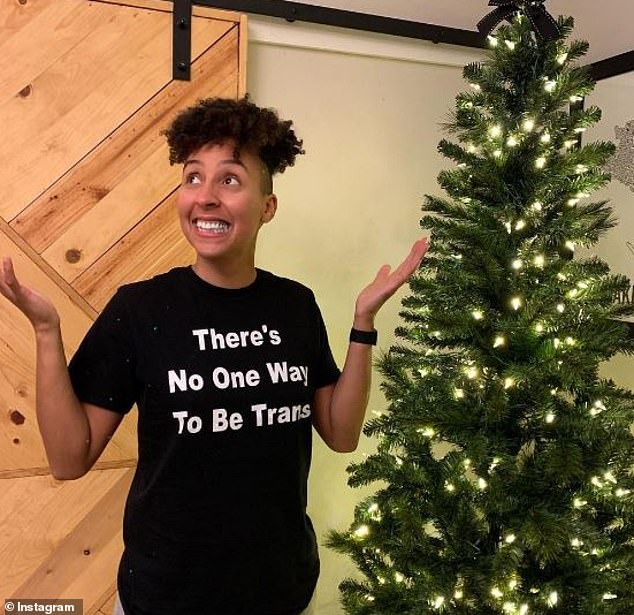 Clarendon has been known to speak openly about their identity and identifies as ‘black, gay, female, non-cisgender and Christian’ 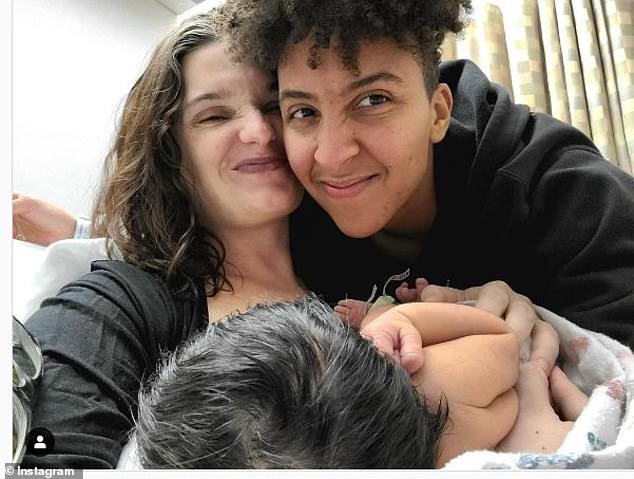 Clarendon has been married to wife Jessica Dolan (pictured) since 2017. The couple had their first child together in December. Jessica carried the baby. They haven’t announced the baby’s sex or name 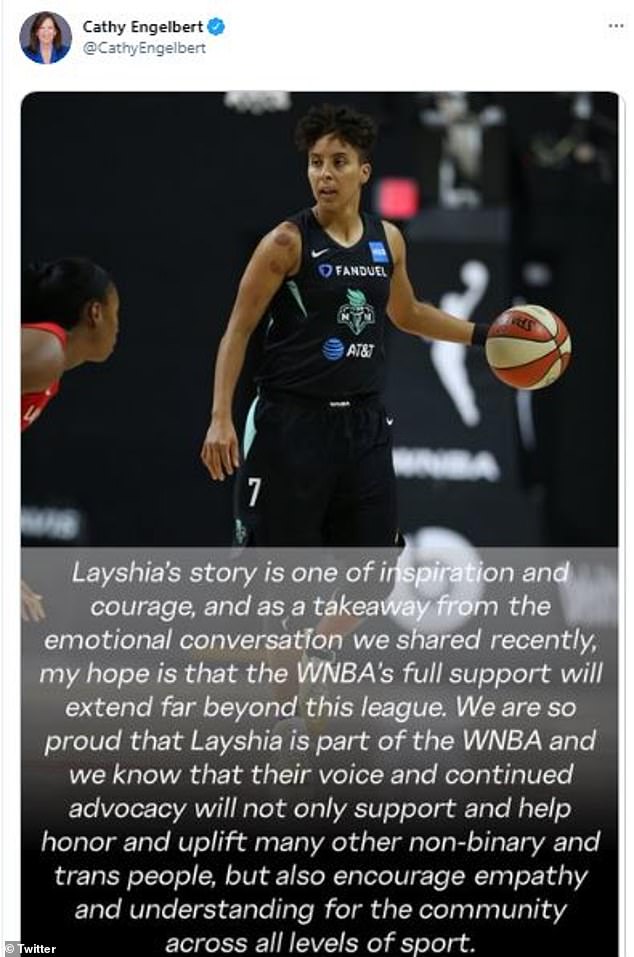 The eight-year veteran of the WNBA averaged a career-best 11.5 points for New York last season.

Clarendon wrote in The Players’ Tribune five years ago they identify as ‘black, gay, female, non-cisgender and Christian,’ and expanded on their identity in an Instagram post in December.

‘Existing outside of the binary for me is freedom,’ Clarendon wrote. ‘I’ve learned that my gender just doesn’t fit into these molds that keep trying to hold it down and box it in.

‘I know that my gender will keep evolving because we change and grow and shape shift and expand. I know that as (nonbinary poet) Andrea Gibson says, my pronouns haven’t even been invented yet. I know that we all have masculinity and femininity inside of us and mine show up equally and wholly and fully.’

Clarendon has been married to wife Jessica Dolan since November 2017. The couple had their first child together in December. Jessica carried the baby – and they’d said earlier this year they didn’t want to find out the baby’s sex in advance.

It’s not clear whether the couple had a girl or a boy or what they named the new baby. The couple announced the baby as ‘#babyC’ on Instagram. 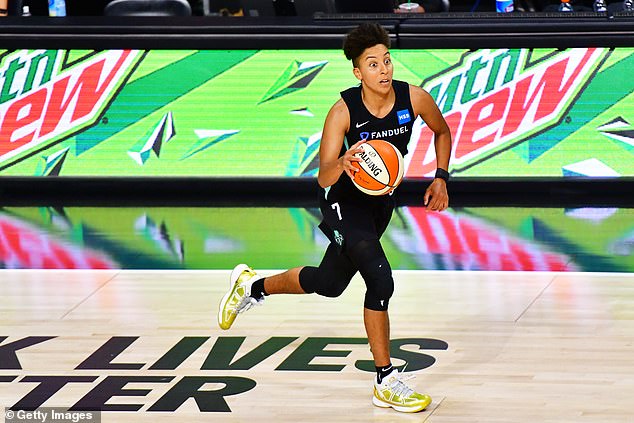 Clarendon, an eight-year veteran of the WNBA, averaged a career-best 11.5 points for New York last season