Transgender violence has spiked since the 2016 Presidential Election

There was a 20 percent increase in violent deaths of transgender people between 2016 and 2017, and a new survey by Columbia University found that 70 percent of transgender participants have significantly higher concerns for their safety since the 2016 election.

Nearly 30 percent of people transgender respondents said they have experienced hate crimes following the election and more than two-thirds reported high levels of sadness or depression and anxiety.

During his campaign, Donald Trump promised to ‘fight’ for the rights of LGBTQ individuals, but experts say these findings suggest he isn’t following through with that promise.

A Columbia University study found nearly 30 percent of transgender participants experienced hate crimes following the 2016 Presidential Election. During his campaign, Donald Trump, pictured at a rally in October 2016, promised to ‘fight’ for the rights of LGBTQ individuals

Multiple studies point to the prevalence of structural, interpersonal, and individual forms of stigma surrounding among transgender people that have been linked to adverse health outcomes including depression, anxiety, suicidality, substance abuse, and HIV.

According to the Human Rights Campaign, there were at least 28 deaths of transgender individuals due to fatal violence in 2017, up from 23 in 2016.

So far in 2018 there have already been at least six deaths of transgender individuals from fatal violence, compared with four in the

A 2016 survey found that 1.4 million adults in the US identify as transgender – a term that applies to individuals who identify with a gender that is different to their assigned sex.

Gallup data from 2016 indicated that 4.1 percent of adults in the US identify as LGBTQ, which stands for lesbian, gay, bisexual transgender and queer, up from 3.5 percent in 2012.

The study published in January was based on qualitative and quantitative data from 909 sexual minority women and gender minorities collected between December 2016 and May 2017 via an online survey.

Seventy percent of the participants reported having ‘moderately’ or ‘much’ higher concerns about their safety since the election.

Transgender participants reported significantly higher fears for their safety than those who identified as female.

‘What we found suggests the need for prevention and intervention strategies to ensure that marginalized and minority populations have support and effective coping tools to weather potential increases, or perceptions of increases in stigma, and to prevent such perceptions from becoming internalized and increasing risks for engaging in unhealthy behaviors,’ Veldhuis said. 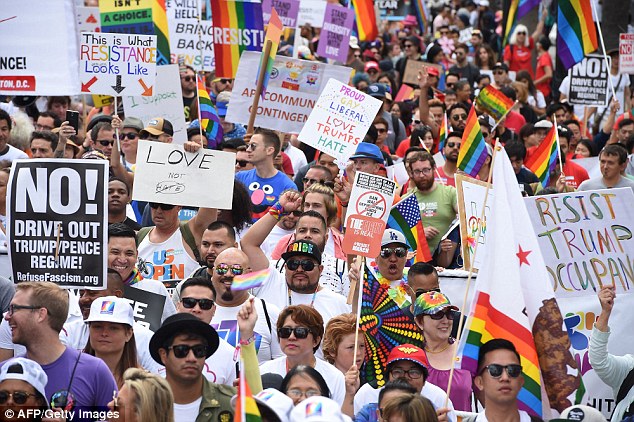 Members of the LGBT community and their supporters hold signs condemning the Trump administration at the #ResistMarch on June 11, 2017

During his campaign, Donald Trump broke from the Republican Party’s traditional narrative and promised to ‘fight’ for LGBTQ individuals.

Leaders in the community have said that Trump’s first year in office did not reflect his promise to the community – citing the nominations of several judges with anti-LGBTQ records and the refusal to recognize pride month.

In June, six members of the Presidential Advisory Council on HIV and AIDS (PACHA) resigned because they felt that Trump’s policies were harmful to individuals living with the diseases, the majority of whom are gay men.

On World AIDs Day in December, Trump issued a statement about the epidemic that neglected to mention the LGBT community.

In July, Trump announced a ban on transgender people joining the military – only to reverse decision later in the year.

In October Trump’s Attorney General Jeff Sessions told the Justice Department that the court’s would no longer recognize Title VII as defending transgender individuals from discrimination in the workplace.

Pompeo reportedly called the Supreme Court’s 2015 marriage equality decision ‘a shocking abuse of power’ that ‘flies in the face of centuries of shared understanding of our Constitution’.

Some of the key issues for the transgender community in the 2016 election included access to healthcare, protections against workplace discrimination and the proposed ‘bathroom bill’ out of North Carolina that would require all persons to use public restrooms based on the sex they were assigned with birth.

Exit-poll data indicated that Trump received only 14 percent of the LGBTQ vote, compared with 48 percent who voted for Republican nominee Mitt Romney in 2012.

Participants in the Columbia study described their reactions to the election using words such as ‘terrified’, ‘scared’ and ‘shell-shocked’.

‘My partner and I are more aware of where we should be publicly open about our relationship and where it is not safe,’ one participant said of the post-election climate for the LGBTQ community.

According to the researchers, stigma in the larger social and political environment puts transgender individuals at an increased risk for poor mental and physical health outcomes.

Policies that are seen as discriminatory such as amendments to the Obama-era Defense of Marriage Act and nondiscrimination laws that do not include sexual orientation or gender identity have been shown to be associated with higher rates of suicide attempts among transgender individuals, according to the study.

The researchers wrote: ‘Given the relatively few explicit legal rights available, transgender and gender-nonconforming individuals may feel particularly at risk related to recent changes in the political environment.