Transgender woman, 26, who stormed a 7-Eleven and hacked at strangers with an axe is jailed

Transgender woman, 26, who stormed a 7-Eleven and hacked at strangers with an axe in terrifying random attack is jailed for nine years

A transgender woman who randomly attacked two people with an axe at a Sydney convenience store has been sentenced to nine years behind bars.

Evie Amati, 26, was jailed on Friday after ambushing Benjamin Rimmer and Sharon Hacker at a 7-Eleven in Enmore in the early hours of January 7, 2017.

She was found guilty of attempted murder in August last year after the NSW District Court rejected her claims she was suffering from mental illness.

She told the court that just before the attack she heard voices that told her to ‘kill and maim’ and ‘start the rise of hell on earth’.

CCTV footage of the viscous attack showed Amati casually walk into the store carrying an axe – before standing next to Mr Rimmer, who was in line behind Ms Hacker.

In the video, Amati was seen swinging the axe twice into the face of Mr Rimmer, knocking him to the ground, before hitting Ms Hacker, who also fell to the ground.

Blood was seen gushing from Mr Rimmer’s head, as he tried to evade Amati – and he removed his t-shirt to absorb the blood to seal his wound.

The court also heard evidence from a third victim, Shane Redwood, who told the jury via audio visual link from the UK he was across the road when he saw a woman hit another woman with what he thought was a baseball bat.

Mr Redwood said it was only after approaching the store to offer assistance he realised Amati was wielding an axe. 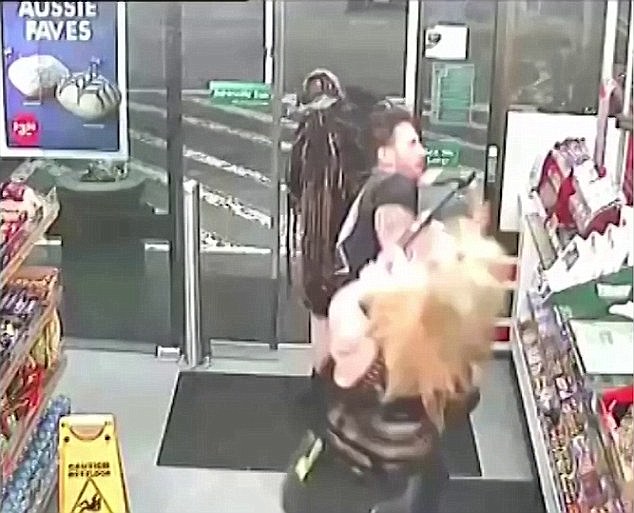 Amati was captured on CCTV swinging the axe twice onto the face of Mr Rimmer, knocking him to the ground