London mayor Sadiq Khan says he will create one of the world’s largest car-free areas of any capital city by closing swathes of central London to motorists.

Mr Khan and Transport for London today announced the London Streetspace programme, which will transform the capital’s streets to have a focus on walking and cycling as people returning to work from the coronavirus lockdown try and avoid public transport.

The Mayor of London said: ‘Many Londoners have rediscovered the joys of walking and cycling during lockdown and, by quickly and cheaply widening pavements, creating temporary cycle lanes and closing roads to through traffic we will enable millions more people to change the way they get around our city.’

Some of London’s busiest roads could close, to be used instead by cyclists and pedestrians under plans from TfL, last year Tower Bridge was shut for a day to raise awareness of air-pollution

Exact details have not been announced, nor a time frame.

A Transport for London spokeswoman said on Friday afternoon: ‘We’re working closely with London’s boroughs to determine the final details of the new car-free zones and will confirm exact street locations and timescales once these have been agreed.’

Among the scheme’s plans is the ‘rapid construction of a strategic cycling network, using temporary materials,’ which will include routes to reduce crowding on Tube and train lines.

Some streets will be switched to walking and cycling only, while others may also have buses. This has been planned for streets between London Bridge and Shoreditch, Euston and Waterloo, as well as Old Street and Holborn. 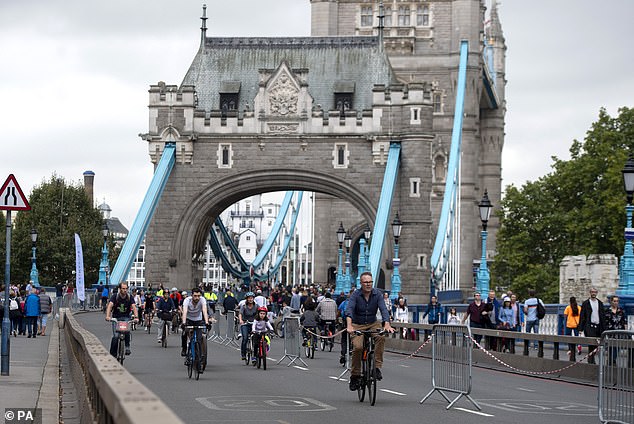 The announcement comes on the same day it was declared there would be a new £15 Congestion Charge and a matter of days after ministers agreed to hand Sadiq Khan a £1.6billion bail-out package with ‘strings attached’ to get London’s transport system back up and running.

Transport for London claims the changes, which do not have a set timeframe as yet, could also see a ‘complete transformation’ of local town centres to help cyclists and pedestrians.

It adds: ‘Wider footways on high streets will facilitate a local economic recovery, with people having space to queue for shops as well as enough space for others to safely walk past while socially distancing.’

There are also plans to reduce traffic on residential streets through similar measures.

TfL has already begun making improvements to boost social distancing using temporary infrastructure. Pavements have been doubled in size in areas with high footfall such as Camden High Street. 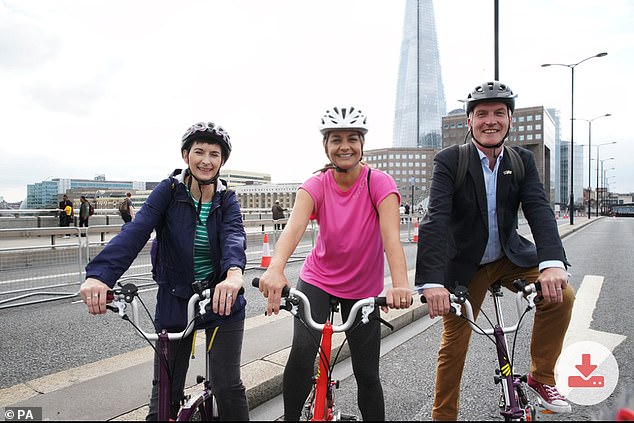 Transport for London claims the changes, which do not have a set timeframe as yet, could also see a ‘complete transformation’ of local town centres to help cyclists and pedestrians

Mr Khan, said: ‘The capacity of our public transport will be dramatically reduced post-coronavirus as a result of the huge challenges we face around social distancing.

‘Everyone who can work from home must continue to do so for some time to come. The emergency measures included in our major strategic London Streetspace programme will help those who have to travel to work by fast-tracking the transformation of streets across our city.

‘Many Londoners have rediscovered the joys of walking and cycling during lockdown and, by quickly and cheaply widening pavements, creating temporary cycle lanes and closing roads to through traffic we will enable millions more people to change the way they get around our city.

‘I urge the Government and boroughs to work with us to enable Londoners to switch to cleaner, more sustainable forms of transport – and reduce the pressure on other parts of our transport network – once the lockdown is eased.’ 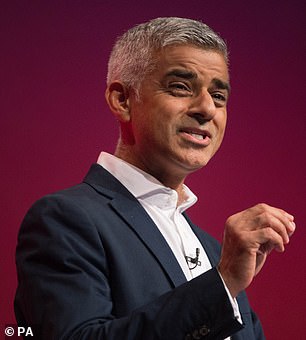 Mr Khan has pledged to get services back up to 70 per cent of pre-crisis levels by Monday, but then warned that it would not be possible without extra cash.

Government sources said the mayor had demanded £2billion but was turned down ‘several times’. The sides have settled for a £1.1billion package plus £505m in loans which ‘will need to be paid back’.

‘There are a lot of strings attached,’ the government source said.

As part of the agreement, TfL will have to restore full services ‘as soon as possible’ although there is no fixed timetable, and the government will also approve advertising on TfL. ‘He will be taking “stay alert” not “stay at home”,’ the source said.

TfL will have to report on staff absences, which are currently said to be running at 20 per cent.

There will also be a central government review of TfL’s finances and fares will increase by RPI plus 1 per cent, breaking the Mayor’s previous pledge to a freeze on fare rises, according to the source.

City of London’s roads will close for cyclists and pedestrians

Transport chiefs want to impose 12 or 24-hour closures for cars and divert buses off its main routes including Cannon Street, Poultry, Lombard Street, Old Broad Street and Threadneedle Street, home to the Bank of England.

Without the vehicles, pavements will be widened, new cycle lanes created and extra space for queuing outside shops and cafés, with the plan expected to be approved by the Square Mile’s planning committee tomorrow as the City of London’s 550,000 workers start returning to offices as the lockdown eases.

But critics have slammed the proposals saying the closures will make things worse for commuters who must travel to work in London, especially when Boris Johnson has suggested that people drive as well as walk or cycle to work. Traffic in the capital is up two per cent compared to a week ago, according to TomTom, and increasing with each week as the nationwide travel ban ends.

But defending the plan Catherine McGuinness, policy chief for the Corporation of London, said: ‘Even a small increase in the number of people using cars, taxis and private hire vehicles to commute is likely to lead to an unacceptable level of congestion on central London’s street network’.

Workers were packed like sardines on trains and buses as millions across the country went back to work for the first time after Boris Johnson eased the lockdown with Tube staff calling conditions ‘dangerous’ and a ‘complete shambles’.

London Bridge station has seen a spike of 25 percent more people commuting in the past week, MailOnline understands.