Transport Secretary Grant Shapps has been forced to campaign against his own anti-car policy after pavement barriers turned his constituency into a ‘ghost town.’

Barriers were installed along pavements in Welwyn, Hertfordshire as part of Mr Shapps’ £250million ‘new era’ for cycling and walking, which was announced during a Downing Street coronavirus briefing in May.

More than 1,300 people have now signed a petition asking Hertfordshire County Council to ‘use common sense’ after the measures and one-way system created ‘another dead high street.’

An email seen by the Sunday Telegraph from Mr Shapps’ parliamentary office has revealed how the Transport Secretary contacted the council to admit the measures were ‘not suited to the old layout of Welwyn’ weeks later.

It comes as pavement barriers have begun to pop up in town centres across the country since the pandemic hit.

The email added the barriers, meant to help social distancing, may have been an overzealous measure as there are ‘reduced transmission risks’ outside.

Shopkeepers in Welwyn have warned businesses could be forced to close due to a significant drop in visitor numbers, which was noted just days after the ‘ugly’ barriers and one-day system were installed.

Jane Carr, who launched the petition, said: ‘The barriers make our country village look like a crime scene.

‘Grant Shapps has left us floundering on this issue. I guess he’s between the devil and the deep blue sea given his constituency and government roles.’

Florist Wendy Rowley, who has worked on the high street for 30 years, fears she may have to close her shop due to a reduction in daily customer numbers.

She said: ‘We used to get 40 to 45 customers a day. Now, we are getting two or three visitors through the door. It’s so sad.’

Pavement barriers are now being used across London and in other towns, often drawing opposition from residents and local politicians.

In Camden, Highgate, Primrose Hill and Hampstead the barriers are in place along most main roads and Camden’s Conservatives leader Cllr Oliver Cooper has said they will cause more gridlock and pollution.

He said: ‘Some of the changes will mean more gridlock and pollution and hurt local businesses without benefiting public health, because Camden has not considered factors that only local residents would know.’

In Colchester, ‘eyesore’ barriers recently erected have already been taken down after complaints from businesses who say they were taking up parking spaces. 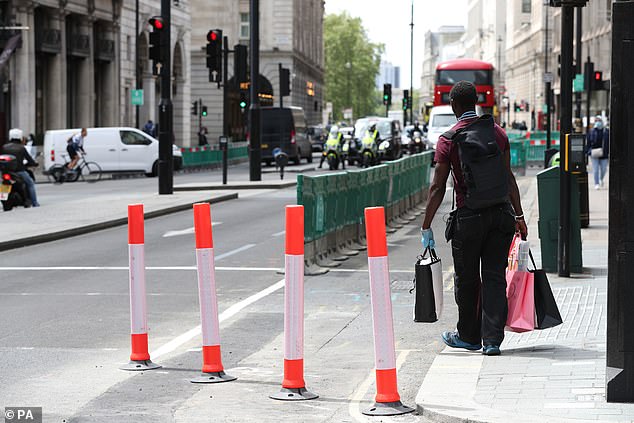 Pictured: Similar barriers seen by the pavement in Piccadilly, London on June 4

The barriers in Shapps’ constituency, which could remain in place until 2023 to ease congestion ahead of roadworks on the A1(M), are so disliked they have been dismantled by vigilantes at night.

A Hertfordshire County Council spokesman told the Sunday Telegraph the council was given £1.25million from the Emergency Active Travel Fund amid the coronavirus crisis.

The one-way system was installed ‘to avoid through traffic using the high street, particularly as volumes return to the A1 and work for the smart motorway project commences in earnest later in the year,’ it was added.