A travel blogger is facing prison after sharing a mocking post on a flight from Sydney about a handwritten menu given to business class passengers.

Rius Vernandes was on a Garuda Indonesia flight when he was given the dinner options on a piece of paper which looked like it had been ripped out of a notebook.

Mr Verandes, who is from Indonesia, shared the image to his 90,000 followers with the caption ‘the menu is still being printed, sir’.

Two days after Mr Vernandes shared the post he uploaded another image of a letter from Indonesian police stating that he and his fiancee were being sued for defamation by the airline.

Business class passenger Rius Vernandes (pictured) was on a Garuda Indonesia flight when he was given a menu which looked like it had been ripped out of a notebook.

Writing on social media, Mr Vernandes said he initially received an apology from Garuda after sharing this post.

The airline said there had been a mistake and the menus were not meant for passengers.

‘Garuda Indonesia apologised [to me] regarding this matter. I really wasn’t mad or anything. I was just doing my job as an airline reviewer. Sharing whatever that was going on in the plane. That’s it,’ Mr Vernandes said on Instagram.

‘We would like to convey that this wasn’t a menu card for passengers, but a personal note for flight attendants that wasn’t supposed to be published. Thank you,’ Garuda Indonesia wrote. 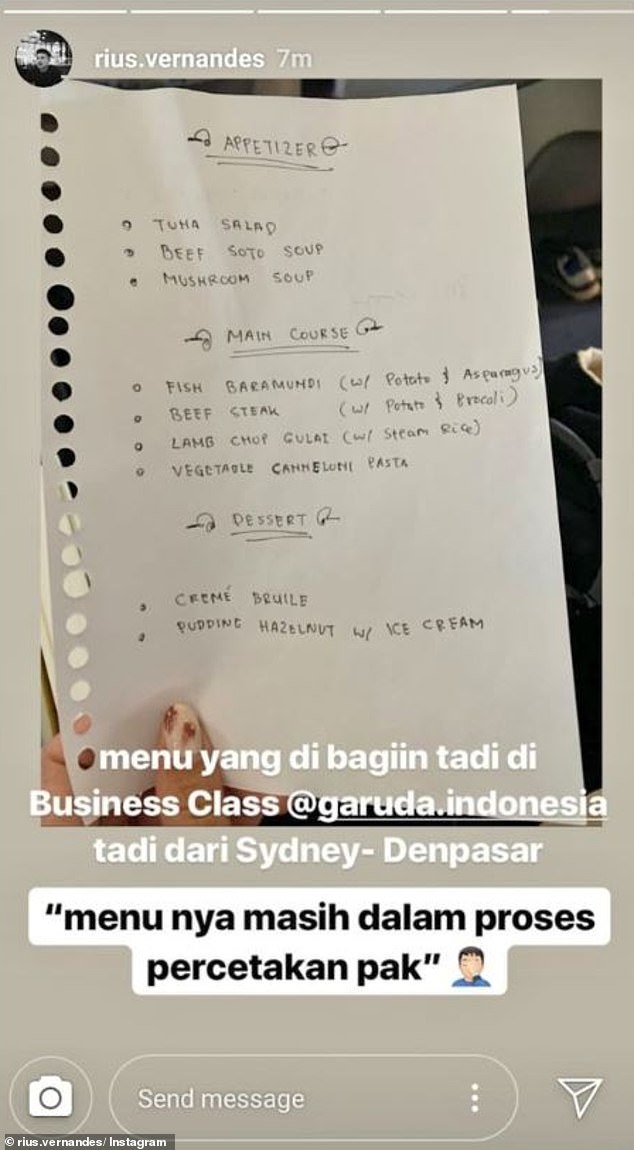 He shared the image to his 90,000 followers with the caption ‘the menu is still being printed, sir’

Mr Vernandes believed the whole ordeal was over but he later revealed that he and his fiancee were being sued for defamation over the post.

‘We’ve been reported for defamation. I’m sure you know I had no intention whatsoever to defame anyone.

‘I hope you can help share and support me through this problem because I don’t want to see that, in the future, whenever we review something as is, whenever we give constructive criticism, we can be criminalised.’

In Indonesia, defamatory content posted online is a crime which is punishable by up to four years in prison. 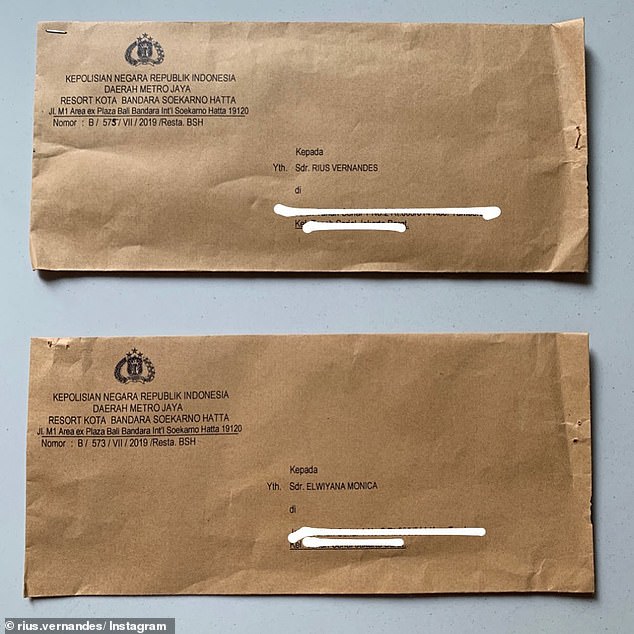 Since Mr Vernandes took a photo of their menu, Garuda Indonesia has instructed cabin crew to prohibit passengers from taking photos or video during a flight.

They later stated they had withdrawn the new policy, but said passengers will be advised respect the privacy of other passengers and to not take photos while flying.

‘Passengers can take photos for personal use such as selfies as long as they do not inconvenience other passengers,’ the company’s spokesman Ikhsan Rosan told Straits Times.