An American traveler was shocked to discover a fellow airplane passenger texting a friend to say she had COVID-19 — but boarded the flight home anyway.

The unhappy traveler was sitting behind the COVID-positive passenger, and noticed the text she was sending through the crack between seats.

The woman had typed out on her iPhone that ‘we’ — that is, she and at least one other person she was flying with — knew they had COVID-19, but decided to catch an early flight home rather than quarantine.

An American traveler was shocked to discover a fellow airplane passenger texting a friend to say she had COVID-19 – but boarded the flight home anyway.

The closely-cropped photo was shared by Reddit user esporx in the ‘trashy’ subreddit this week.

‘Is this is even legal?’ the Redditor asked.

The photo shows a bit of the back of a woman’s bleach-blonde hair and a leopard-print top.

She is mid-text, her polished fingernails hovering over the keyboard as she messages someone whose name appears to be Jamie or James.

‘We have Covid… shhh,’ the woman had typed. ‘That’s why we’re returning home a day early. On the plane…’

The Redditor who posted the image was clearly upset about what they discovered, though they did not indicate whether they notified a flight attendance. 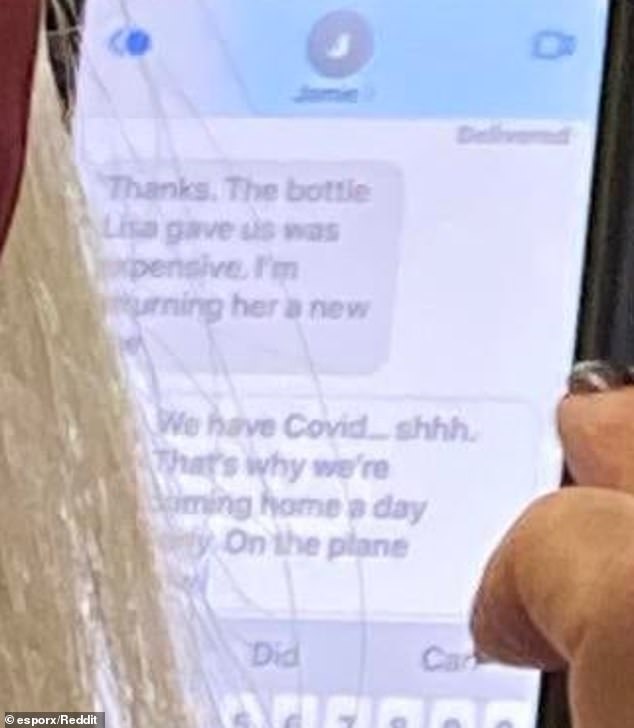 ‘We have Covid… shhh,’ the woman had typed. ‘That’s why we’re returning home a day early. On the plane…’

Several commenters on the post were equally horrified that the woman would knowingly expose others to the virus.

‘SUPER f*** people who KNOW they have covid that don’t take precautions to keep other people safe from it,’ wrote one.

‘F*** that lady, expose her to the flight attendant. See something, say somethin,’ wrote a third.

‘That’s when you say loudly to her “Wait… You have COVID??” and let the others around her know. Watch her squirm,’ added one more.

Other commenters, however, were more concerned that the Redditor read another person’s text messages — and called the Redditor a ‘weirdo’ and an ‘a**hole.’

‘I miss the days when people would mind their own business,’ wrote one.

‘Why are you reading other peoples text messages like it’s your business? You don’t even know if they’re joking or not. OP is just being a creep, I hate people like you,’ said another.

‘The trashy part is reading someone’s text messages, whatever the information they contain may be,’ wrote a third.

Yet others still said ‘privacy’ goes out the window when other’s health and lives are at risk.

‘How can anyone defend her? Assuming it’s real and the “shhh” part is her being sarcastic because “oooo I’m on a plane with covid…shhhh…”. Like she’s “joking” about how she’s putting everyone at risk, but is trying to be low key hiding it. That SHOULD be exposed,’ someone said.

‘Anyone who gets butt hurt about her “privacy” are literally people who have s***ty things they do that they hide and have to defend that stance or their internal monologue would call them hypocrites.’ 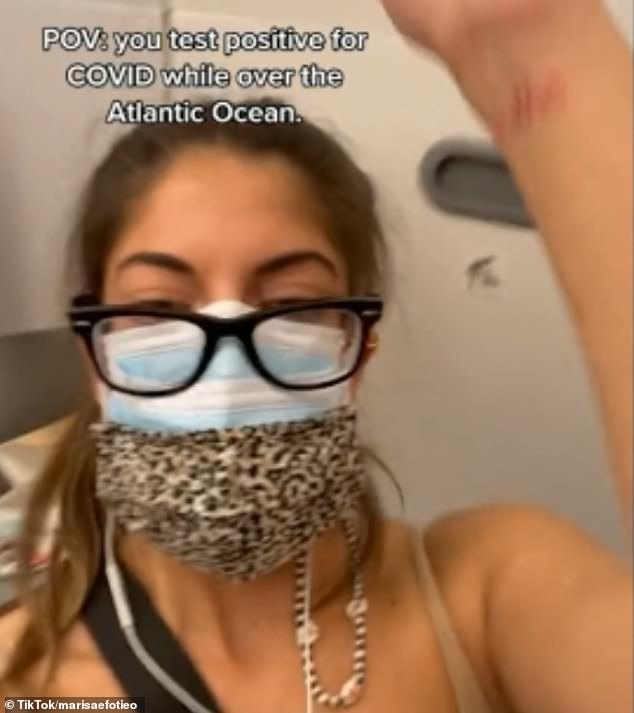 Meanwhile, a schoolteacher who was flying from Chicago to Reykjavik in December quarantined in the airplane bathroom for four hours after taking a positive rapid test in transit

Meanwhile, a schoolteacher who was flying from Chicago to Reykjavik in December quarantined in the airplane bathroom for four hours after taking a positive rapid test while in transit.

Marisa Fotieo’s throat began to hurt during about an hour into her journey and used one of the rapid tests she had brought with her on the trip.

When she discovered that she did, in fact, have COVID-19, she notified a flight attendance and sealed herself off in one of the toilets.

‘There’s 150 people on the flight, and my biggest fear was giving it to them,’ Fotieo told NBC’s Today show.

She then spent five hours of the six-hour journey in the plane’s tiny bathroom.

She posted videos of the experience on TikTok, with a clip of her finding out she was Covid positive going viral with more than 4 million views.

Upon arrival, Fotieo was taken off the plane straight into 10-day mandatory quarantine at a hotel for people with COVID-19.