Funeral fit for a ‘King’: Traveller dubbed the ‘King of Sheffield’ is taken to his final resting place by cortege of Rolls Royces accompanied by hundreds of mourners after his sudden death on Majorca break

The former bare-knuckle boxer’s funeral cortege brought the city’s traffic to a standstill as hundreds of people gathered to say goodbye to him.

Willy Collins, dubbed ‘the King of Sheffield’ was carried from outside the Old Ball pub in Darnall, past Pitsmoor, where he grew up, and through Sheffield’s streets in a gold coffin before a service was held at Shiregreen Cemetery.

The father-of-nine was a well-known member of the traveller community who died suddenly while he was on holiday for his wife’s birthday in Majorca last month.

His cortege was led by people in velvet suits and crowns with a white funeral carriage being pulled by six plumed horses wearing yellow and blue feathers, 40 Rolls Royce cars and some bikers and vintage cars. 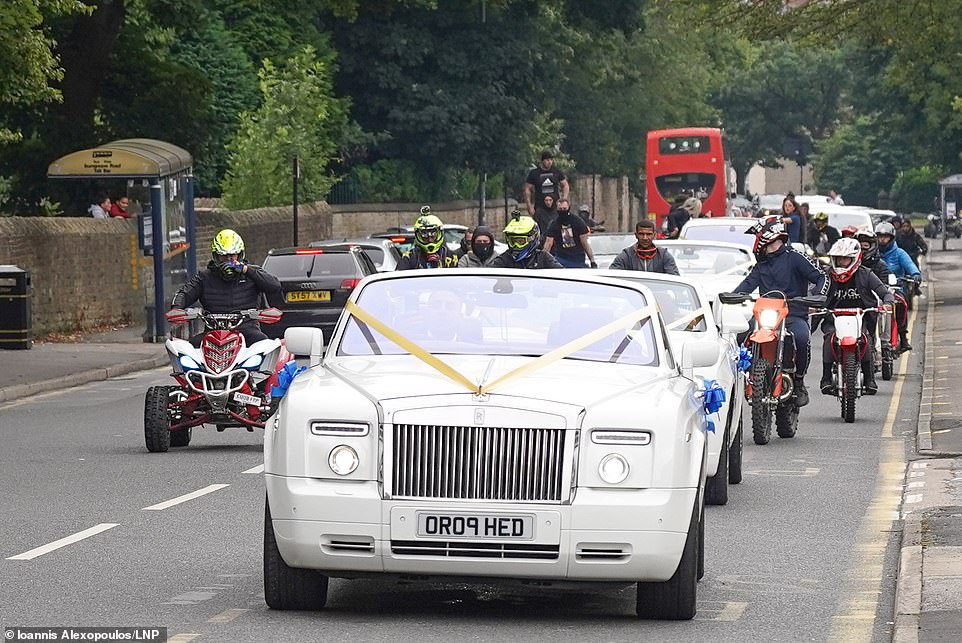 The cortege also had 40 Rolls Royces, about 12 bikers and other vintage cars. Some people leading the cortege wore golden hats 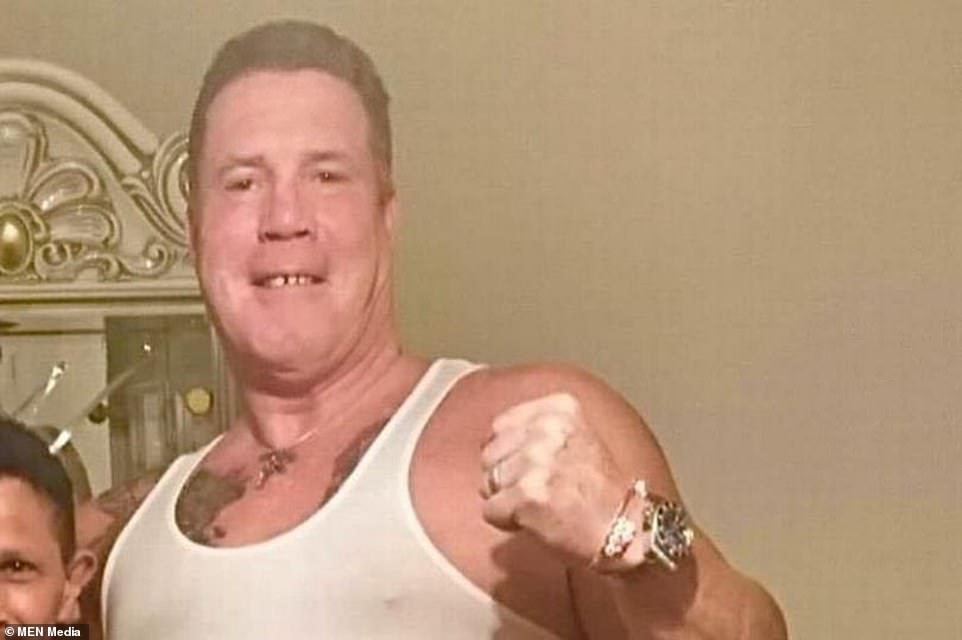 His gold coffin was 22 carats and his vault at the cemetery was lined with tiles depicting the Last Supper.

His wife Kathleen said in her tribute: ‘I’m heartbroken at losing the love of my life.

‘My husband would take the coat off his back to give to a stranger if they needed it.

‘He never looked for trouble but he wasn’t frightened of it.

‘All he wanted was peace for his children and to be able to give them everything they needed.

‘A lot of people have said a lot of nice things about him, which has been very nice to hear.’ 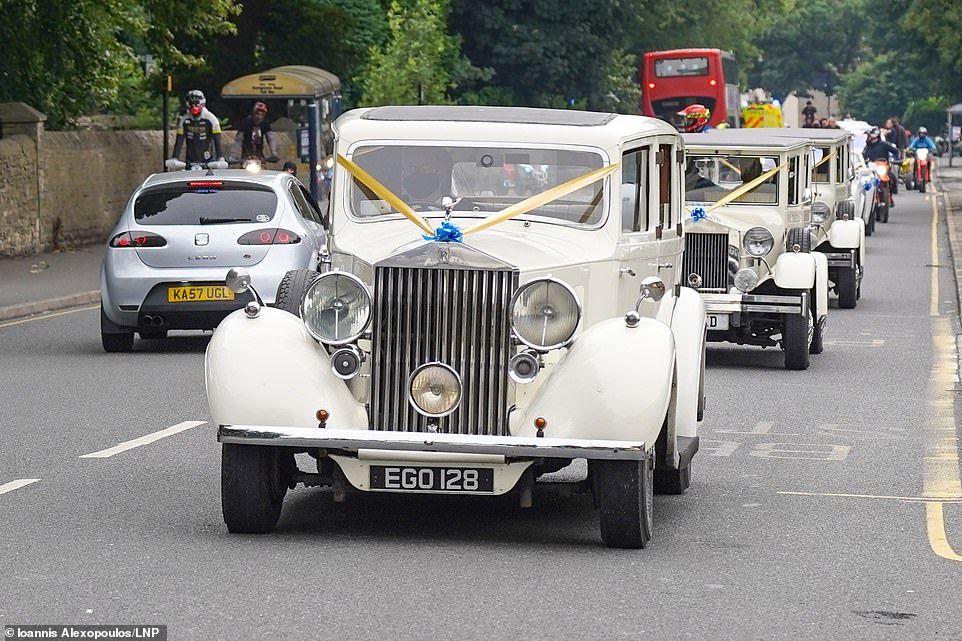 Cars and bikes lined up on Pitsmoor Road, where Willy grew up, as part of his grand funeral cortege that took place today before a service at the cemetery 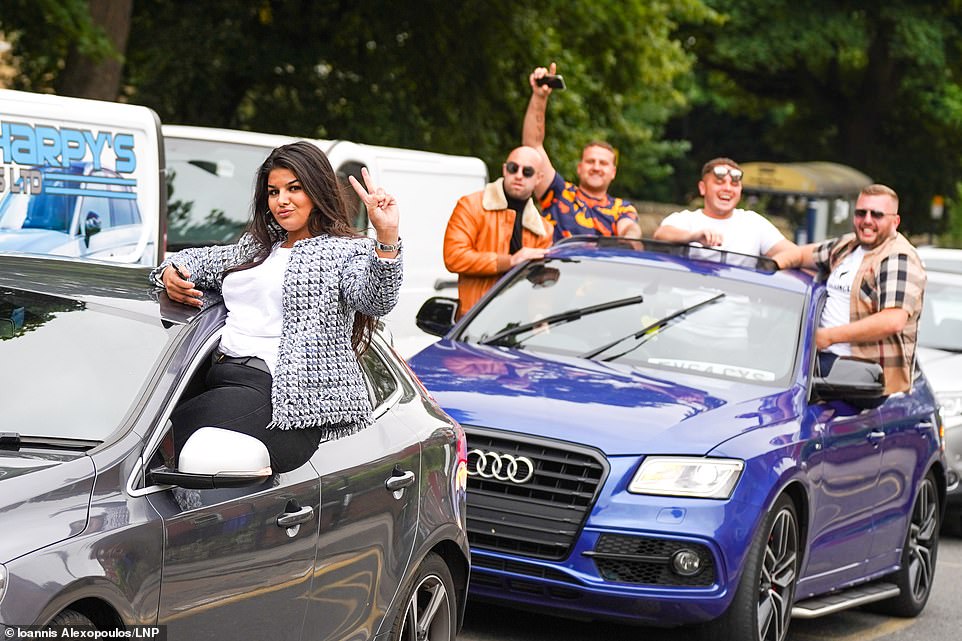 The cortege started outside the Old Ball pub in Darnall, went through Pitsmoor, where Willy grew up, and continued through the streets of Sheffield to Shiregreen Cemetery 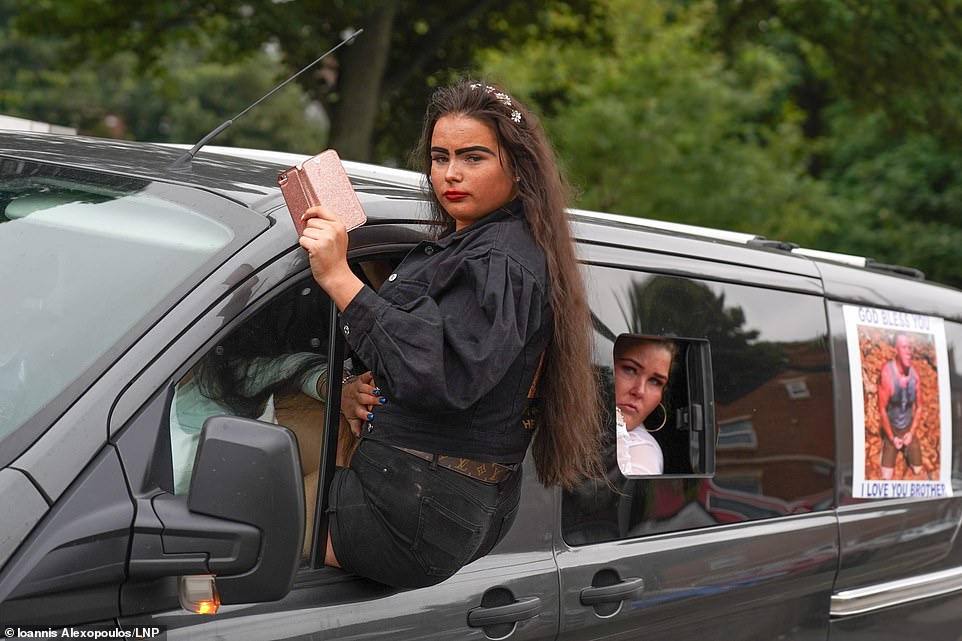 Local media reported that with his family friends, and all the locals who gathered to remember him there were hundreds of people 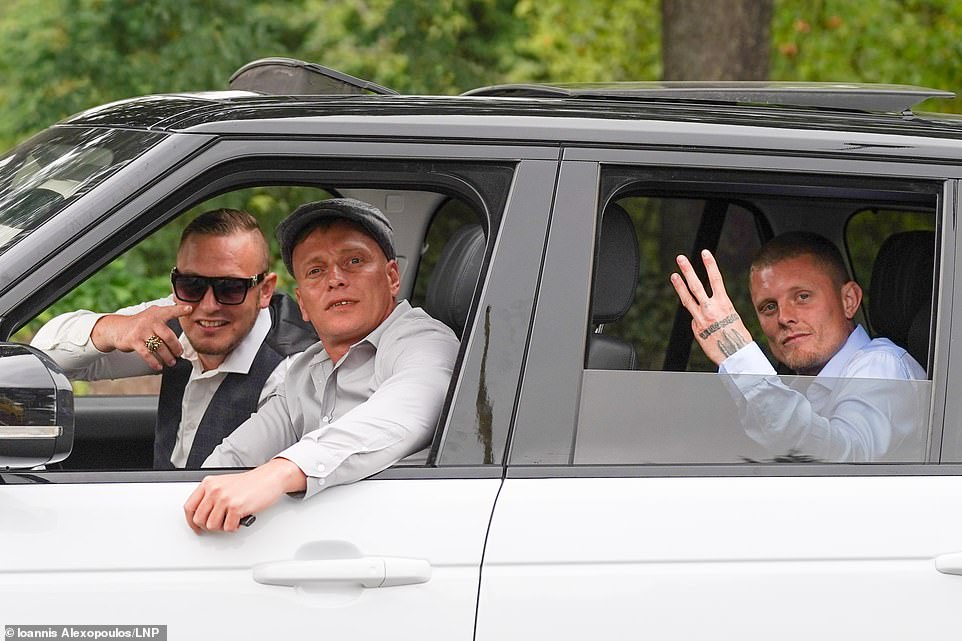 Pictured: Supporters of Willy Collins pose for a picture as they pay tribute to ‘Big Willy’ as his funeral cortege passes through his childhood home town in Sheffield

Kathleen previously claimed that pub owners had received letters  advising them to close for the funeral but  Sheffield Council and South Yorkshire Police said this is not true.

Cabinet Member for Culture, Parks and Leisure, Councillor Mary Lea responded to the rumours on Facebook: ‘During this private family funeral taking place within one of our cemeteries, our priority is to make sure staff and mourners remain safe.

‘In our efforts to limit the spread of coronavirus and protect all those present, our current policy limits mourners to a maximum of 25 people and toilets at our cemeteries and crematoriums remain closed.

‘We expect there may be some travel disruption on the day as the procession travels through the city and we will support this to happen as smoothly and respectfully as possible for mourners.

‘Local pubs and businesses are not required to close on Saturday and have not been asked to do so.’ 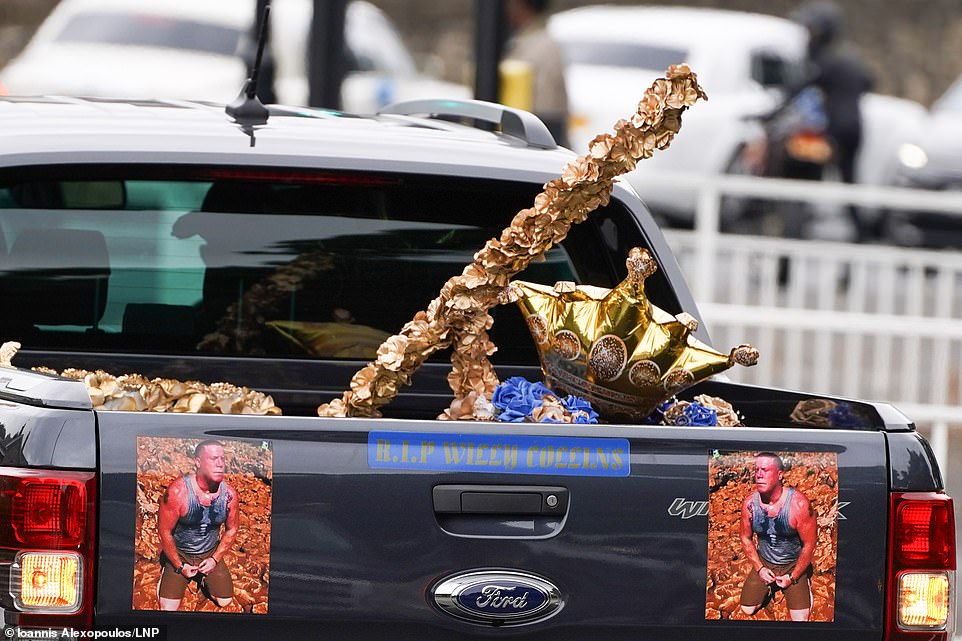 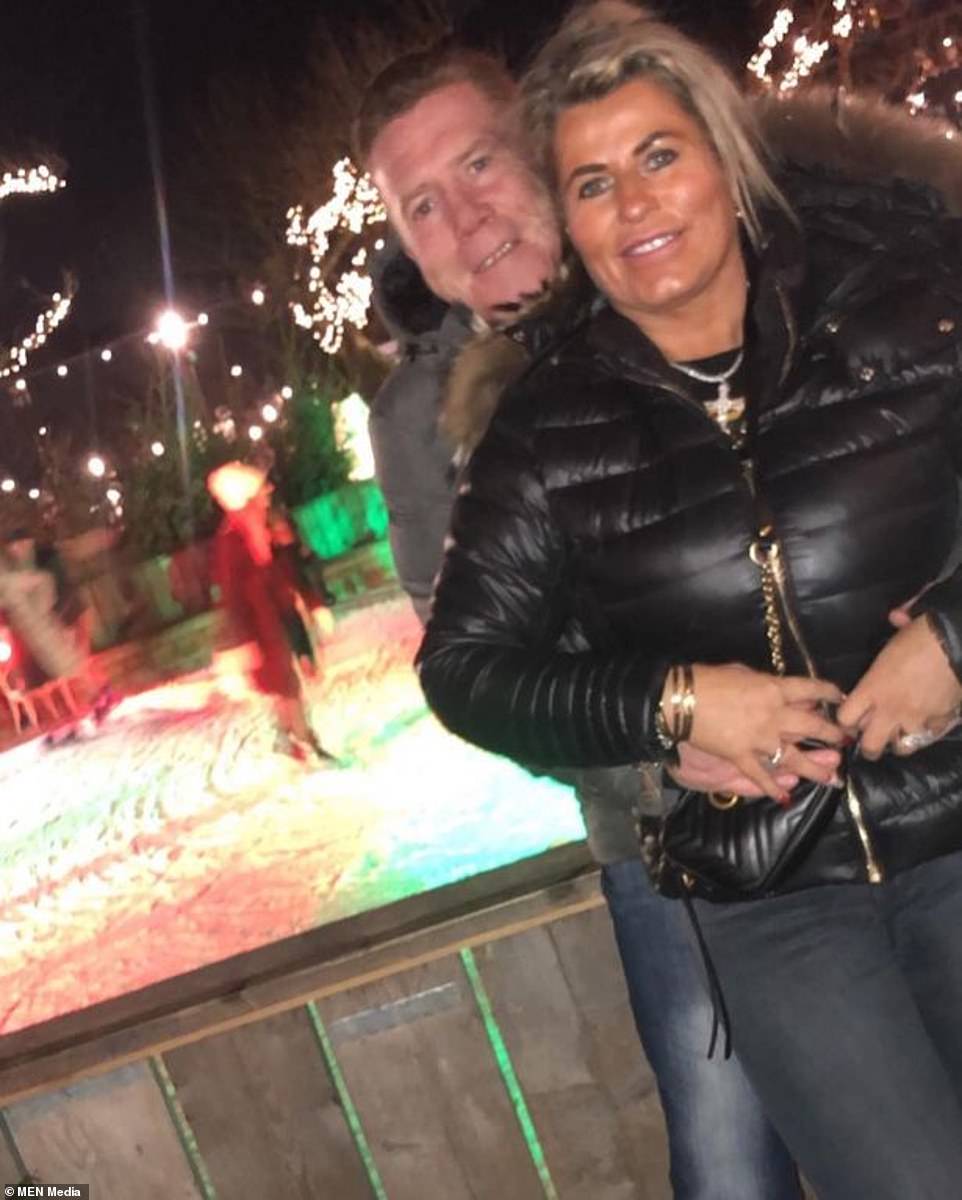 Willy’s wife, Kathleen (woman pictured), paid an emotional tribute to her husband and said he was brother Anthony, who was stabbed 18 years ago

Kathleen also said Willy Collins would finally be his brother Anthony again after he was murdered 18 years ago.

Both men were involved in a violence attack at the Afro Caribbean Club, Spital Hill when Drug dealer Mark Lloyd Roberts, from Burngreave Road, returned to the club after an argument and stabbed the brothers.

Willy recovered from serious chest and lung injuries but Anthony died from the injuries to his heart.

‘Two legends back together again,’

‘I couldn’t be more happier to know he is with his baby brother, who he loved very much and spoke about every day.’