A gang of travellers are believed to be behind raids on the Beckhams’ home.

The £6million mansion was targeted in two botched break-ins over the last two months.

The group – whose names cannot be revealed – have been linked to murders, drug dealing and extortion over the past 30 years.

The family are based in the West Country and are known to carry out their crimes across southern England, Mirror Online reports.

Police were called to the couple’s £6 million home in Great Tew, Oxfordshire, last Friday after their 24 hour security surveillance team noticed the intruders on the property’s CCTV

David and Victoria Beckham were forced to up their security after a terrifying break in at their Cotswolds property after masked raiders scaled the side of their family home.

The couple, who have four children are said to be distraught over the attempted burglary – which ended when the intruders were chased away.

Police were called to the couple’s £6 million home in Oxfordshire, last Friday after their 24 hour security surveillance team noticed the men on the property’s CCTV.

Now, David, 43, has now been forced to significantly increase security at the countryside home where he, Victoria and their children spend many of their weekends.

CCTV has shown how the trio, used a ladder to look into the windows of the upstairs of the house before running from the scene.

One of the men was dressed head to toe in a hooded overalls, along with a balaclava. Another wore jeans and a black hat and matching scarf.

They were seen trawling the area and are thought to have been planning a break in. David and Victoria, 44, are understood to have been on their way to Australia with son Romeo, 16, Cruz, 13, and Harper, 7, when the attempted break on happened.

Hours later, Victoria Beckham was pictured looking distressed and speculation grew over what had happened. 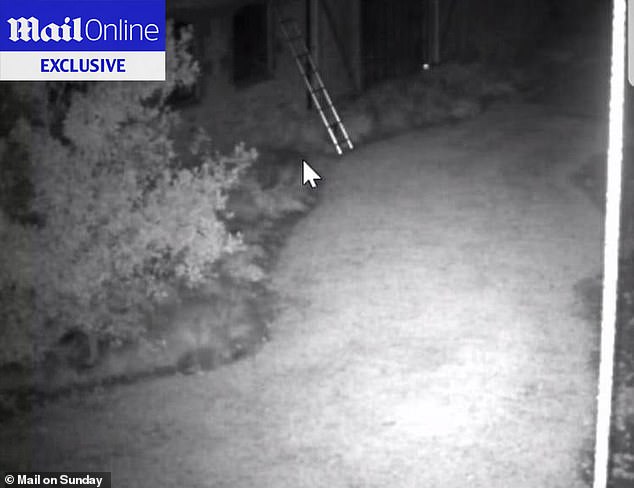 One of the men was dressed head to toe in a hooded all in one outfit, along with a balaclava. Another wore jeans and a black hat and matching scarf

‘This has hit them hard. Victoria has been upset for the last couple of days about this, it has been so though for her. It is frightening and dreadful to think someone would be intruding on their personal space.

‘He would love to be normal but his number one priority is to protect his wife, children and wider family. He is absolutely furious that he has now has to increase his security even more.’

Taking no chances, the security increase will include guard dogs, motion sensor alarms and regular patrols have now been installed to prevent any further intruders getting close to their home, which they’ve been refurbishing for nearly two years. 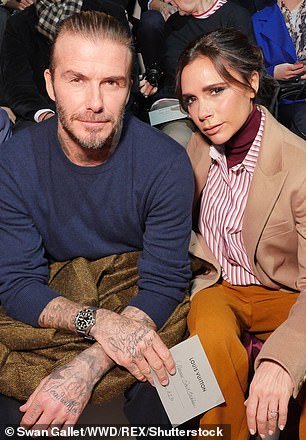 The Beckhams at Paris Fashion Week on January  18 this year

Neighbours include the Prince Harru and Meghan, the Duke and Duchess of Sussex, as well as former Top Gear host Jeremy Clarkson and David Cameron. Soho Farmhouse attracts the likes of Kate Moss, James Corden and singer Sam Smith.

The Beckhams arrived in Australia on Saturday night as guests at Prince Harry’s Invictus Games in Sydney.

Last week David gave an interview to Aussie television show, The Sunday Project, where he spoke candidly about his relationship with former Spice Girl Victoria, saying: ‘I think marriage is always about hard work.

‘Your children, they want your time and they deserve your time and we are hard working and we feel that is the right way to bring up our children to prove and to show them you have to work hard to be successful.’