A traveller is being slammed for an ‘outrageous’ and ‘inconsiderate’ travel hack that saw him cooking chicken in a coffee maker in his hotel room.

Alexander, from Texas, is a product manager who went out of state on a business trip when he found himself wanting to save money on dinner.

‘I’m travelling for work and instead of eating a fancy dinner out, I’ve decided to cook a cheaper meal in the hotel room,’ the employee wrote on LinkedIn.

While his hotel room did not have a stove or any other means to cook a meal, the American man decided on an unconventional method of making dinner.

‘Even though the hotel room didn’t have a kitchen, I managed to use the coffee machine to cook chicken with butter and garlic,’ he said.

But his idea did not come out of necessity – the man simply wanted to save his employer some money when it came to the expense account.

‘Although my company allows me to expense dinner while travelling, I wanted to save money because I know that every dollar counts on the P&L (profit and loss statement).’

He revealed that it was the ‘little things’ like his bizarre act that got people promoted.

But Alexander ran into trouble immediately after checking out of his room.

‘Does anyone know how to get the taste of chicken out of the pot?’ he added to his LinkedIn post. ‘Someone reported me to hotel management and now they are threatening to charge the company card I have on file.’ 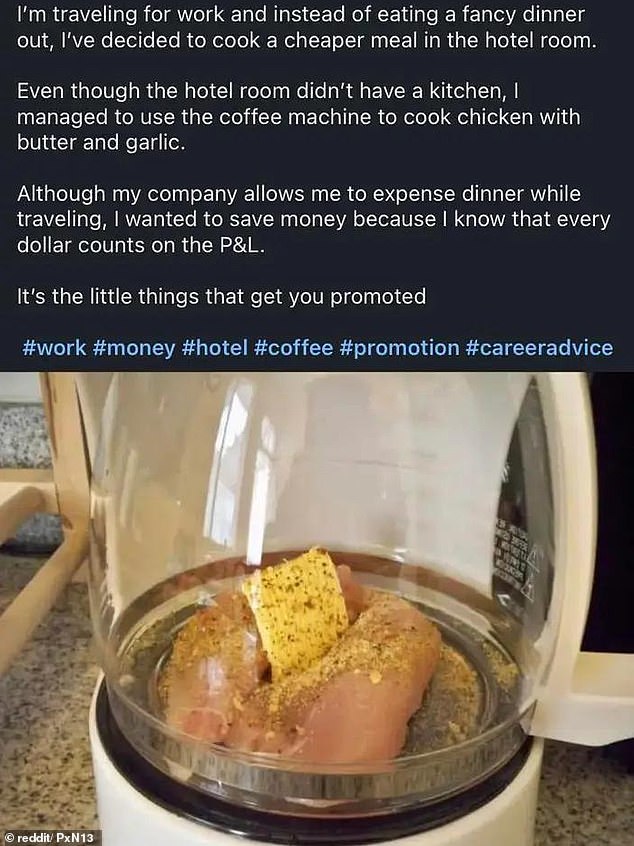 While his hotel room did not have a stove or any other means to cook a meal, the American man decided on an unconventional method of making dinner

‘Thanks a**hole. Next person in that room’s going to have their tea tasting of chicken a** and salmonella,’ one man wrote angrily.

‘Which ladder of success… if this guy is dumb enough to pull stuff like this, I doubt he is valuable enough to get promoted,’ wrote another.

‘There’s no way accountancy looks at the tap and thinks ‘oh neat no food expenses – let me just let the boss know’ – it never happens!’

‘What about the guests who will use that coffee machine after you? They have to drink a coffee with a chicken flavour,’ said a third.

He added, ‘I think you are selfish for doing that, assuming you are saving. Also, it’s not hygienic at all! It damages the hotel’s assets too.’ 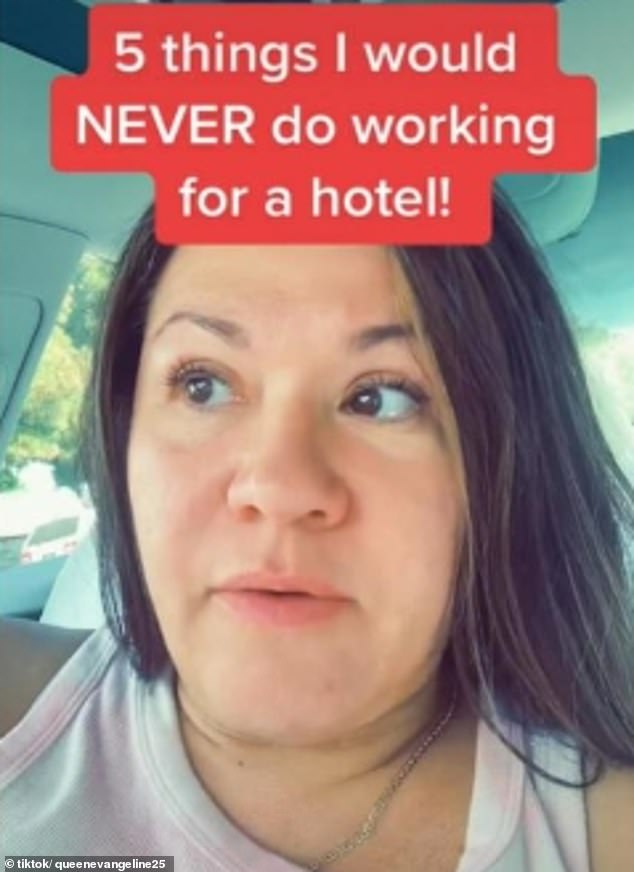 In a similar vein, a hotelier shared the ten things she would never do in a hotel room, knowing how regularly it is cleaned and what safety practices are followed.

TikTok user Evangeline shared two videos about her experiences working in an American hotel and what to watch out for when you book your next room.

Her first piece of advice was to always add every guest in the room to the reservation, so they can always get a key from the front desk, even if the primary booker isn’t with them.

‘If there is more than one person staying in the room I would never not add their name on the reservation,’ she said.

‘If the primary person happens to be gone and the other person gets locked out and they go to the front desk and their name isn’t on the room reservation they won’t be allowed in. They won’t get a key, period.’

Ten things you should NEVER do in a hotel, according to employee

Next, Evangeline moved onto hygiene tips, explaining that her in-depth understanding of the in-house cleaning process has prompted her to bring her own supplies with her whenever she stays in a hotel – and to do a quick wipe down of several key places as soon as she walks into a hotel room.

‘I would never use the remote control without wiping it down first with my own Clorox wipe,’ she said.

‘Your cleaning and my cleaning are different cleaning, you feel me?

And while some might think that hotel points programs are just a gimmick, Evangeline insists that you should always sign up to accumulate points whenever you stay at a hotel.

‘I would never not sign up for the point program, whatever point program that the hotel is offering,’ she said.

‘Back in the day, you used to really have to let some of the points accumulate to actually use them for something good. But these days they actually allow you to use them for other things such as Amazon points.’

When it comes to the bed, Evangeline shared that she would ‘never sit on the bedspread’, explaining that they often don’t get washed.

‘I would never sit on the bedspread,’ she said. ‘A bedspread is not the sheet, it’s not the blanket, it’s on top of that. That thing comes off the first minute I walk into the hotel. Those things are not washed often… those bedspreads get cleaned like maybe once a year so don’t sit on those.’

In a follow-up video, Evangeline shared several other words of warning with her followers, explaining that she never walks around a carpeted hotel or motel room without shoes on: ‘I would always have a pair of flip flops on… I would also not take a shower without wearing them.’

Evangeline said she wouldn’t ever use an ice bucket without putting a liner in first.

‘Some people just use the ice bucket as is without the liner, no don’t do that, put the liner in,’ she said. 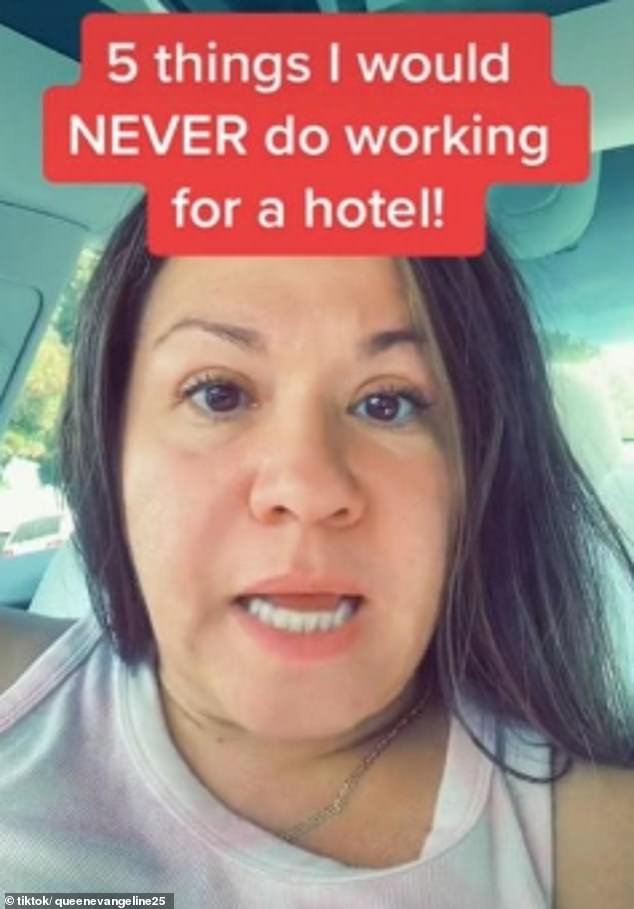 ‘Some people just use the ice bucket as is without the liner, no don’t do that, put the liner in,’ she said

She continued: ‘This is something nobody actually mentions but it’s big for me, I will never use a hotel washcloth on my body or my face.

‘I will use a towel but I will not use a wash cloth. Hundreds, if not, thousands of people have used that on their body and, it’s not that they’re not washed or sterilized, but having that many people coming into close contact with their body parts with a washcloth and then put it on me… no, I’m good.’

She added: ‘Just to clarify, when I say I use a towel, I will use the body towel very, very gingerly.’

Evangeline also warned future hotel guests not to say their room number out loud at the front desk for safety reasons.

‘At least they’re not supposed to, and you shouldn’t either.’