Travellers between Britain and France will NOT face two-week quarantine

British tourists will be able to enjoy holidays in France this summer after they were exempted from tough quarantine rules.

The UK Government yesterday confirmed it will force anyone flying into the country to remain in isolation for 14 days to stop new coronavirus infections.

France threatened at the weekend to enforce ‘tit-for-tat’ action against British travellers, meaning anyone from the UK would have been placed in quarantine on arrival in France.

But Boris Johnson yesterday phoned French President Emmanuel Macron and agreed a mutual exemption from the measures for holidaymakers from both countries. 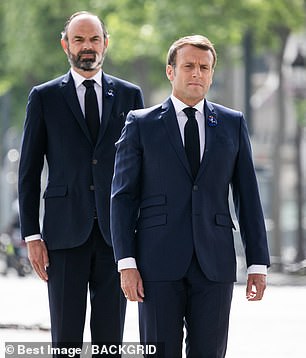 The two leaders said in a joint statement: ‘The Prime Minister and the President agreed to work together in taking forward appropriate border measures.

‘This cooperation is particularly necessary for the management of our common border.

‘No quarantine measures would apply to travellers coming from France at this stage. Any measures on either side would be taken in a concerted and reciprocal manner.

‘A working group between the two Governments will be set up to ensure this consultation throughout the coming weeks.’

UK airlines last night threatened to ground their fleets in response to the Government’s quarantine scheme, which they said would effectively kill off any hopes of a resumption of international travel.

The Airport Operators Association, representing Britain’s airports, said it would have a ‘devastating impact’ on the industry. 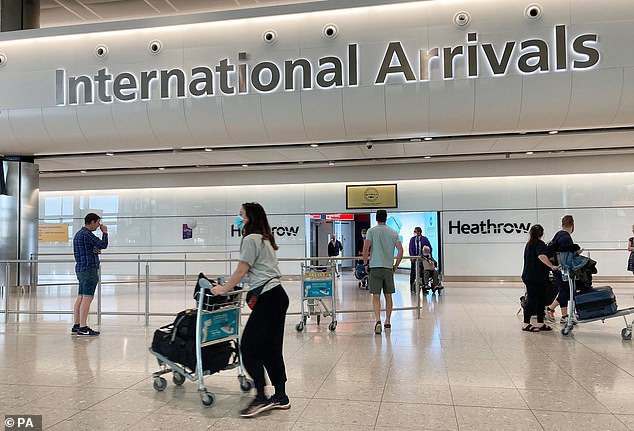 Britain on Friday said from June all arrivals in the UK – including returning Britons – would be quarantined for 14 days and face £1,000 fines or deportation if they do not. Pictured: Terminal 2 arrivals at London’s Heathrow Airport on Saturday

The plans mean that any UK traveller wanting to go on a fortnight’s holiday to countries other than France will have be away from their place of work for four weeks as they will need to quarantine for two weeks on their return to Britain.

Tim Alderslade, chief executive of industry body Airlines UK, whose members include British Airways, Virgin Atlantic, Ryanair, easyJet and major tour operators TUI and Jet2, said: ‘We all – including Government – need to adapt to the new normal but closing off air travel in this way is not the way to achieve this.

‘Ministers are effectively telling people they can no longer travel for the foreseeable future and airlines will respond by grounding their operations.’

Airlines are seeking an extension of the furloughing scheme to October plus ‘holidays’ on making Air Passenger Duty and other Government charges.

Meanwhile, Virgin Atlantic has appointed advisers in case it needs to go into administration after the Government turned it down for a £500million bailout.

The airline is making 3,150 staff – a third of its workforce – redundant, and is still trying desperately to shore up its finances.

Experts say this does not mean insolvency is inevitable but is something that they are legally obliged to line up. 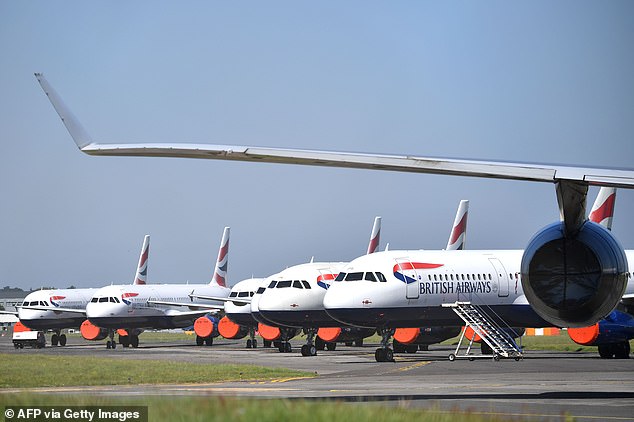 The travel industry reacted with horror at the news of the two-week quarantine, with one company boss warning it could ‘kill it off completely’. Pictured: British Airways aircraft in Bournemouth Airport this week

Virgin Atlantic’s chief executive Shai Weiss yesterday told The Sunday Times he was ‘100 per cent certain’ the airline can survive.

Of the quarantine scheme proposed over the weekend, Karen Dee, from the Airport Operators Association, said: ‘Quarantine would not only have a devastating impact on the UK aviation industry but also on the wider economy.

‘If people have to quarantine for 14 days, they will be much less likely to want to travel, so there will be a dramatic impact on us at a time when we are already seeing passenger numbers decline by about 98 per cent.’

Pilots’ union Balpa questioned the ‘scientific basis’ for the proposed quarantine rules and warned the industry would be in a ‘death spiral’ without Government support.

A Government spokesman said: ‘The aviation sector is important to the UK economy and ministers are in regular communication with its senior representatives to discuss the challenges… and ways we can support.’

All travel into France is currently heavily restricted, with only essential travel permitted and an international travel certificate required to cross the border.

Limitations expected to stay in place until at least June 15th.