Travellers who set up camp at a crematorium used for Coronation Street funerals and told mourners to ‘f*** off’ have returned with Halloween decorations – including a grinning Grim Reaper.

Eight caravans and five cars pitched up in the car park of Howe Bridge Crematorium, in Atherton, Lancashire, a month after they were last booted off the site.

Travellers were spotted putting washing and generators out when they set up on Monday and this morning tables and chairs were spotted strewn around along with car seats and fuel containers.

A Wigan Council spokesman said they installed a height barrier but its original location had to be changed as it would impede funeral directors’ access to the crematorium. 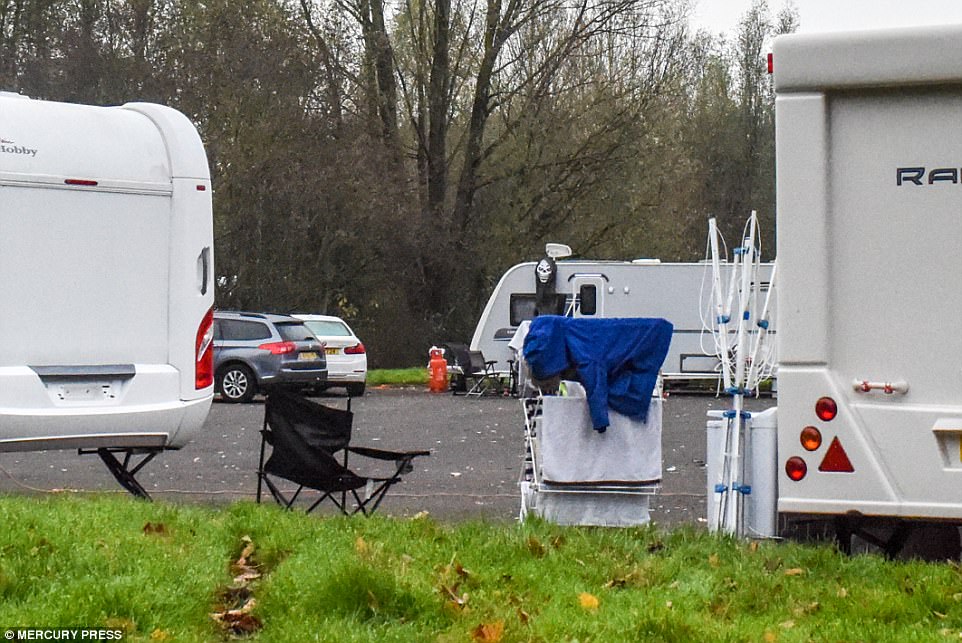 Eight caravans and five cars pitched up in the car park of Howe Bridge Crematorium, in Atherton, Lancashire, a month after they were last booted off the site

One callous traveller even hung a hooded Grim Reaper skeleton decoration over their caravan facing the crematorium entrance.

Jonathan Coombes visited the site last month concerned about his mum Cindy’s grave at the adjoining cemetery and to plead with travellers to move on out of respect – but claims he was told ‘we won’t wake them up, now f*** off’.

The 45-year-old from Atherton, Lancashire, went again yesterday afternoon to see for himself if they had returned and blasted Wigan Council for not erecting barriers high enough to stop them.

Apprenticeships tutor Jonathan said: ‘I did approach them last month but didn’t bother yesterday after the responses I got last time.

‘Last time they said they have moved on out of respect of it being a crematorium, but given that they returned it shows that’s not the case. 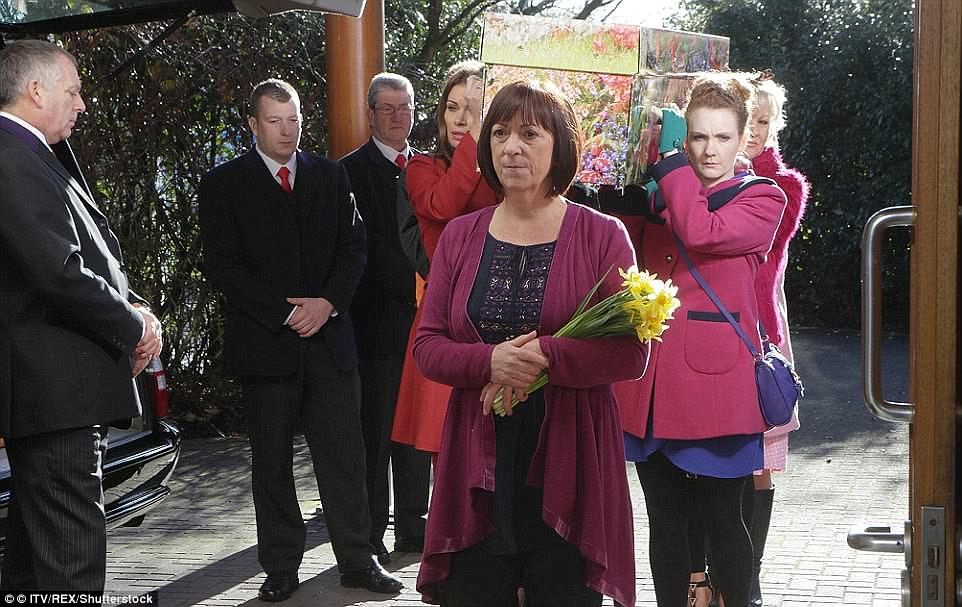 The crematorium has been used in Coronation Street, such as for Hayley Cropper’s funeral on the soap in 2014 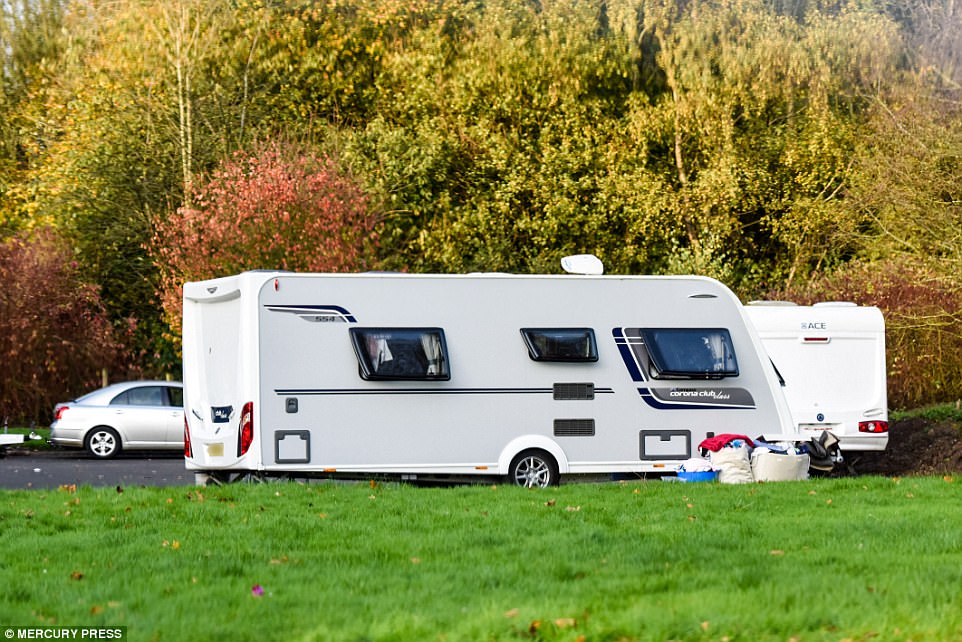 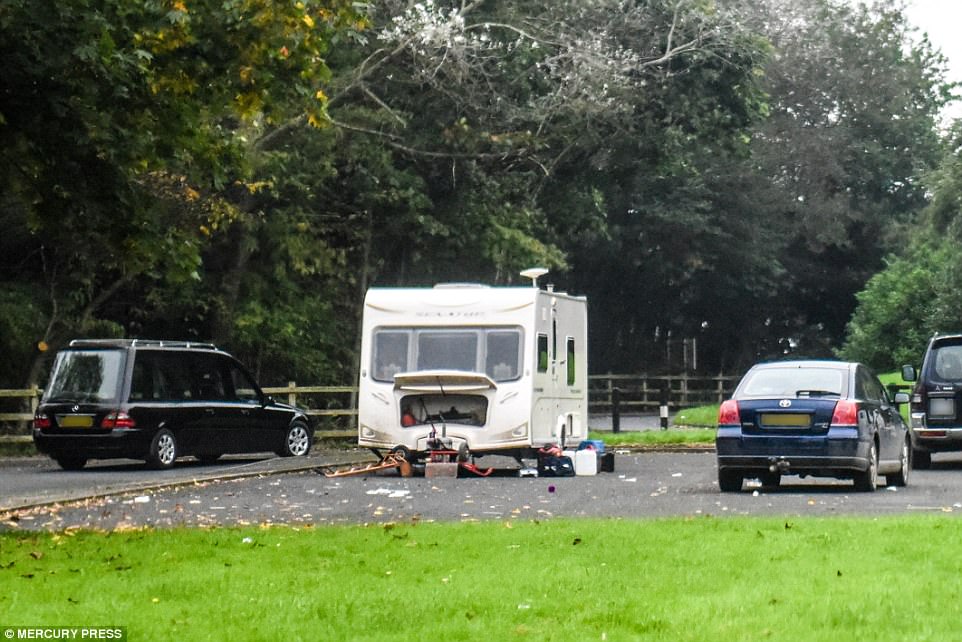 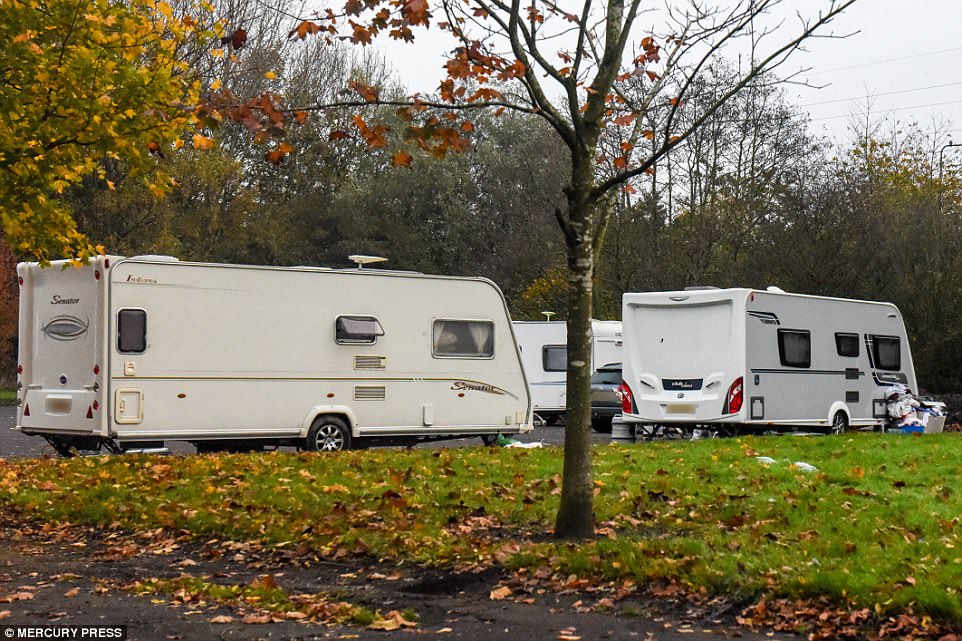 ‘They’ve crossed a line by setting up here again. It’s supposed to be a place where people go to pay their respects – they shouldn’t be on the crem.

‘It’s coming up to Remembrance Day too – there are poppies all around town – but the council can’t seem to find the time or the money to put barriers up to stop them getting on the site.

‘It’s something when you have to beg and plead to protect a crematorium, it’s a sad situation.’

Last month Gail Hill was devastated when she and her family were forced to drive past gawping travellers as they took her mother, Linda Hill, 68, on her final journey after she died from bile duct cancer.

The ‘takeover’ meant that many family members were unable to park near the crematorium and instead were forced to dump their cars on the grass to avoid the ‘disrespectful’ travellers. 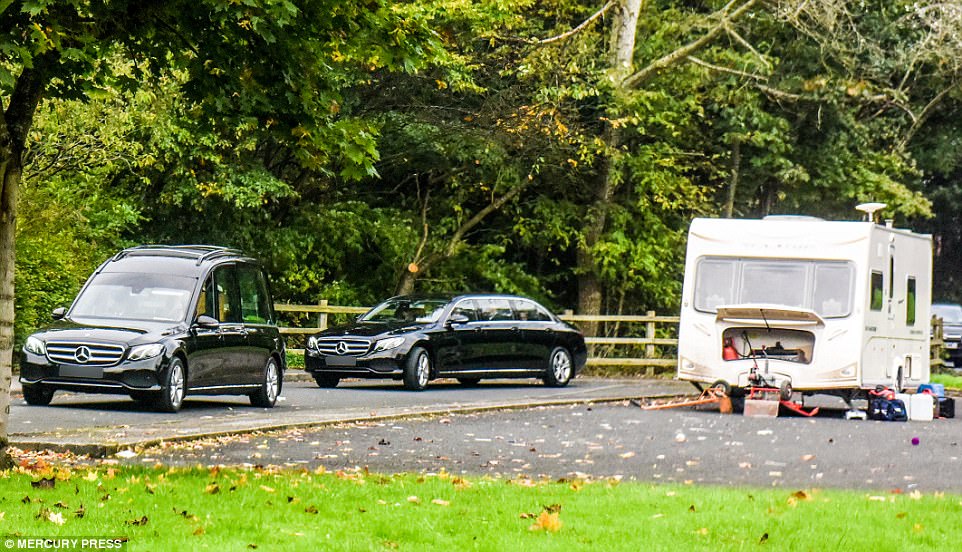 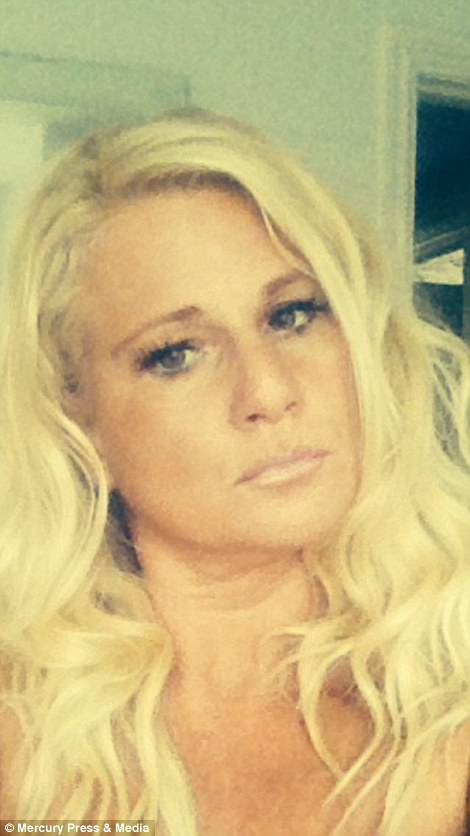 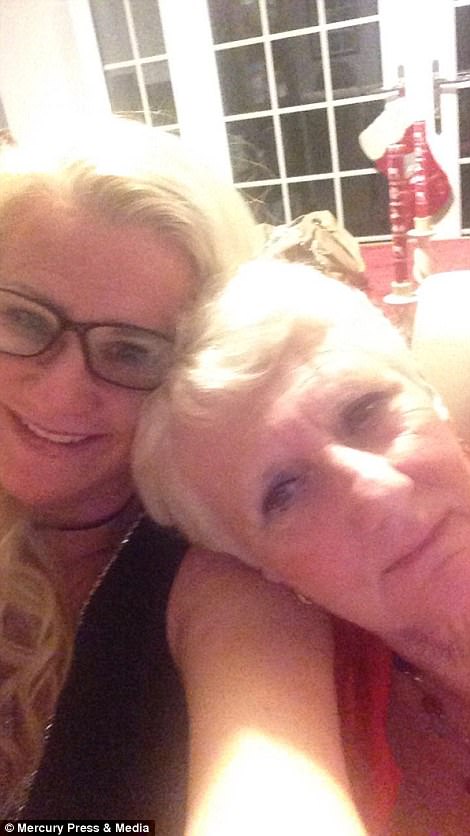 Gail Hill (left) was devastated when she and her family were forced to drive past gawping travellers as they took her mum Linda Hill (together, right), 68, on her final journey

‘On one of the worst days of my life we had to drive past them and their washing machines and fridges which is not what you want to see.

‘Of all the places they chose to pitch up they had to appear at the entrance to a crematorium, it’s outrageous.’

The crematorium has formed the back-drop to some of Corries most tear-jerking goodbyes – including much-loved character Hayley Cropper’s funeral in 2014.

The crematorium, which is privately run by the Westerleigh Group, has continued with services despite the travellers descending on the council-owned car park.

The travellers’ presence appear to be in contradiction of the Cremation Act 1902 which states that there should be a distance of at least 200 yards between a crematorium and a ‘dwelling’. 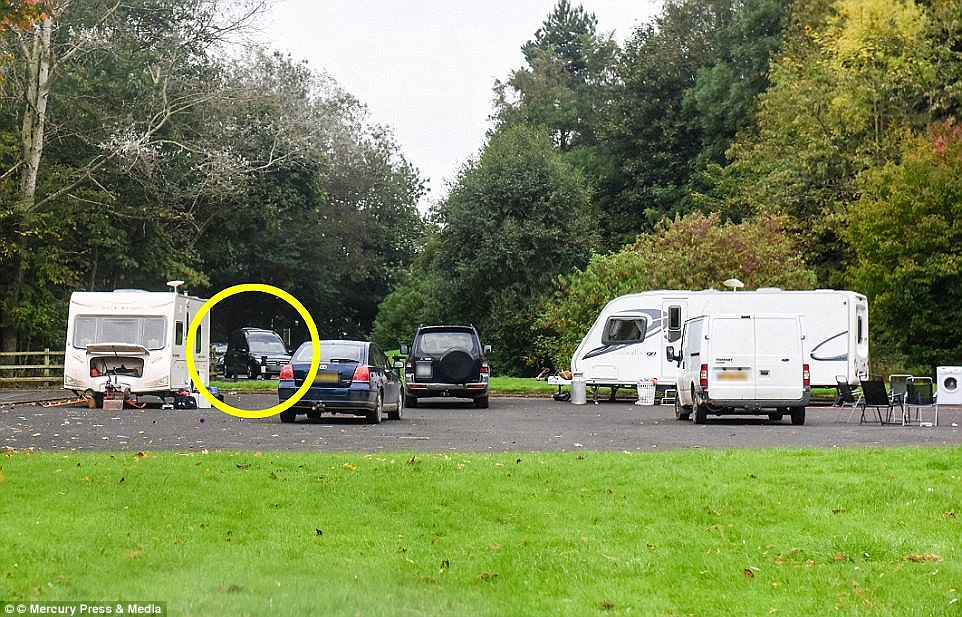 Paul Barton, assistant director of environmental services at Wigan Council said: ‘We have served an eviction notice to the travellers on Howe Bridge cemetery and if they have not left the site by Thursday, the bailiffs will be instructed to evict them.

‘We are disappointed that this location has been targeted again, which is extremely insensitive to grieving families and relatives.

‘We did install some defensive measures and a height barrier following the first encampment, however, the original location of the barrier needed to be changed to accommodate funeral directors accessing the crematorium.

‘Further work is underway to include extra fencing.

‘We hope to have this work done as quickly as possible to protect the cemetery in future for our residents.’ 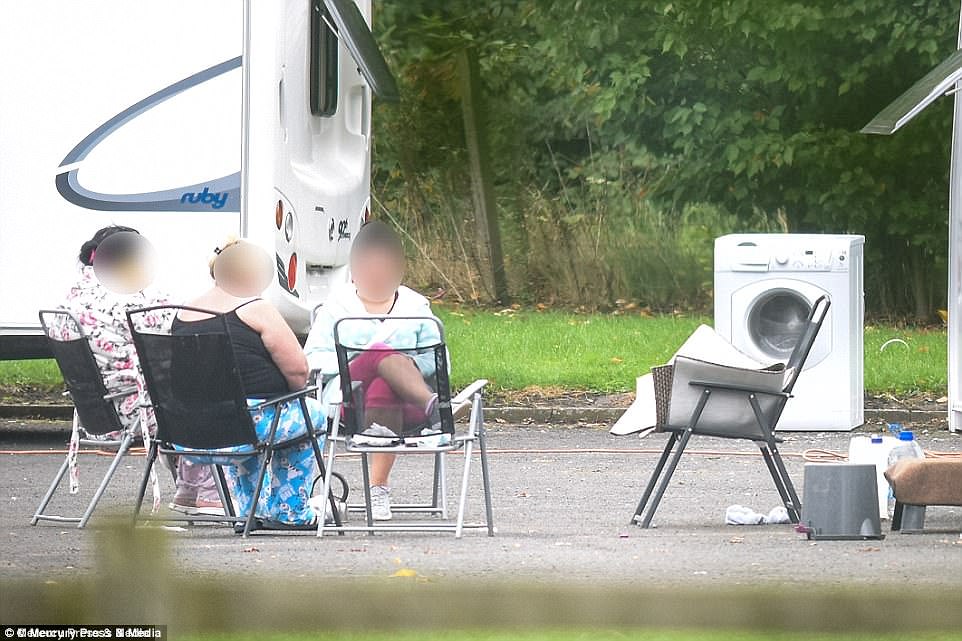 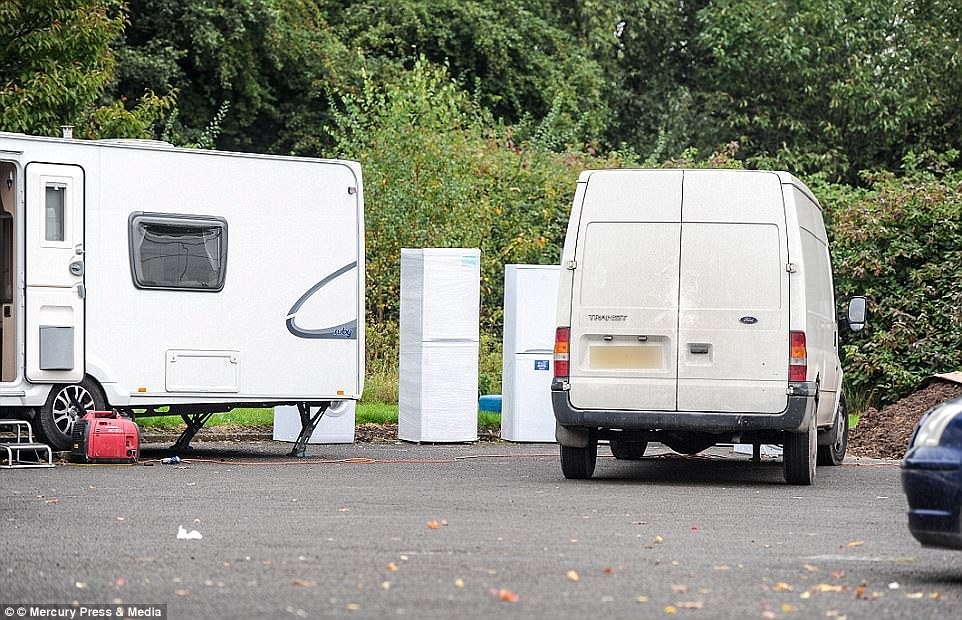