Travellers will be quarantined for TWO WEEKS and face £1,000 fines if they break rules

All travellers coming into Britain will be quarantined for two weeks to prevent a second peak of coronavirus infections, Boris Johnson is expected to announce at the weekend.

The Prime Minister will say that passengers arriving at UK ports and airports from all countries except Ireland, and including Britons, must self-isolate for 14 days, according to The Times.

Travellers will fill in a digital form with details of where they intend to self-isolate. Authorities will carry out spot checks and those found to be breaking the rules will face fines of up to £1,000 or deportation.

The measures will help reduce the ‘transmission of the virus as we move into the next phase of our response’, a government source told The Times. The measures are expected to come into force in early June.

Mr Johnson will announce a very limited easing of Britain’s coronavirus lockdown in the coming days, adopting a cautious approach to try to ensure there is no second peak of infections.

All travellers coming to Britain will be quarantined for two weeks to prevent a second peak of coronavirus infections, Boris Johnson is expected to announce on Sunday (pictured, airline passengers in Heathrow Terminal 5) 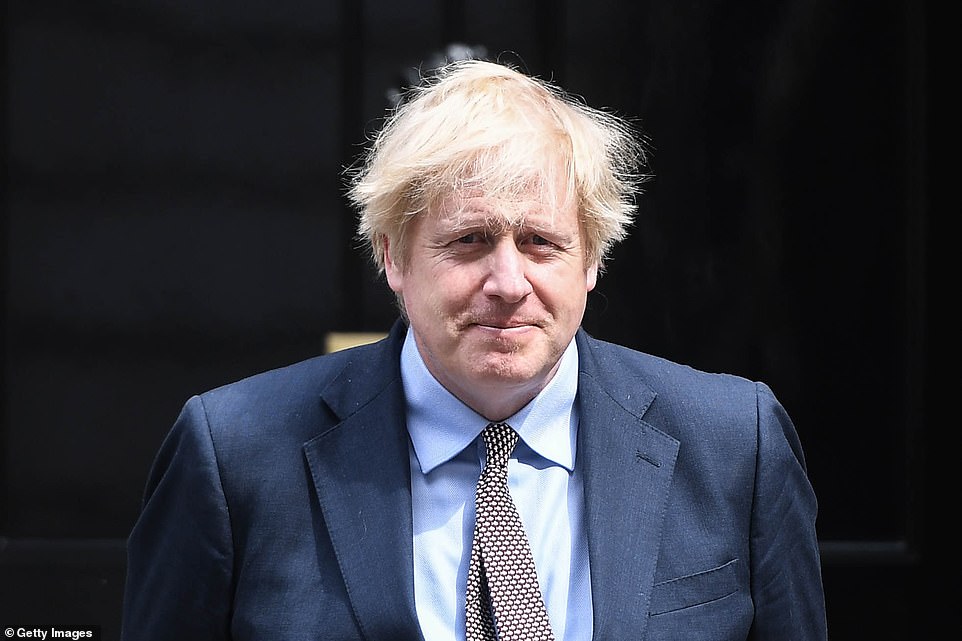 The Prime Minister will say that passengers arriving at UK ports and airports from all countries except Ireland, and including Britons, will be forced to self-isolated for 14 days, according to The Times (pictured, outside Downing Street) 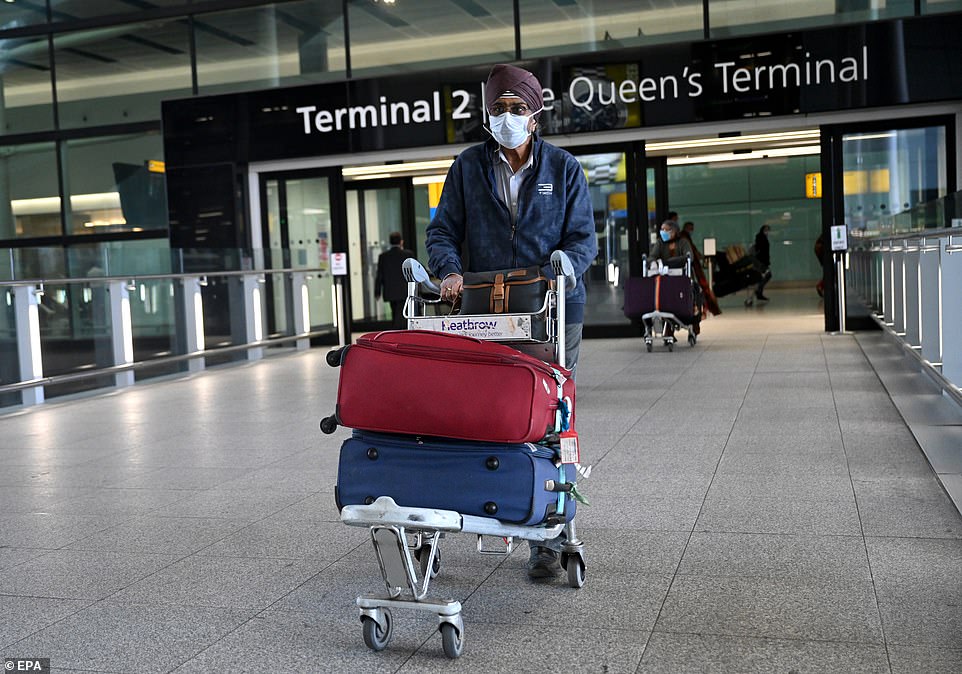 Travellers will have to fill out a digital form with details of where they intend to self-isolate (pictured, at Heathrow Airport) 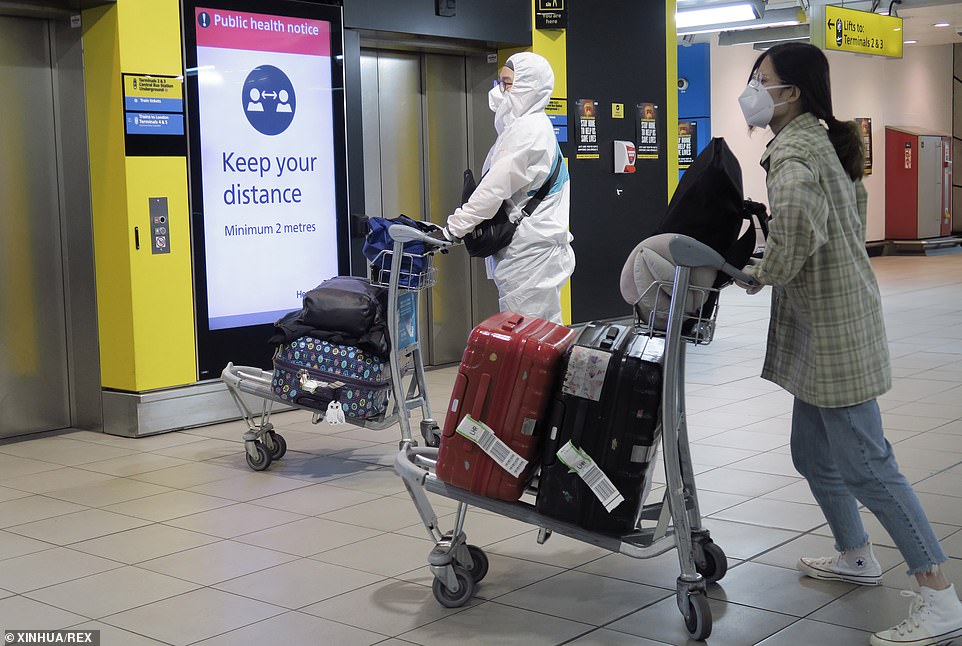 Authorities will carry out spot checks and those found to be breaking the rules are to face fines of up to £1,000 or even deportation (pictured, airline passengers wearing face masks are seen at Heathrow Airport) 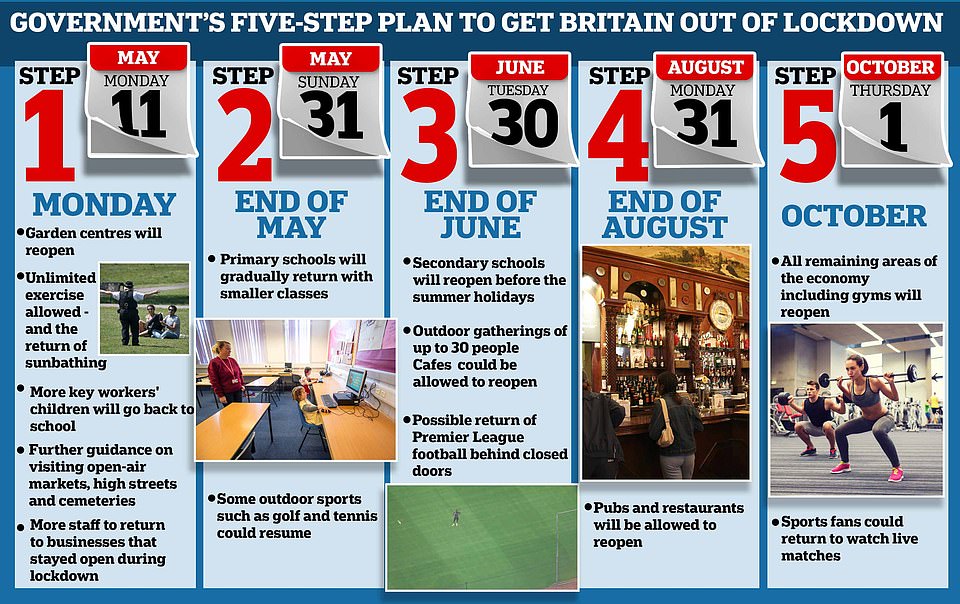 The government’s exit strategy is taking shape, although the details are not yet clear and are still being thrashed out

The revelation follows news that garden centres will be allowed to reopen next week under the Johnson government’s plans to ease the lockdown imposed in response to the virus.

They can let customers visit again from Wednesday provided social distancing and hygiene measures are in place. Cleaners and tradesmen such as plumbers will also be urged to go back to work.

The Welsh government announced yesterday that garden centres in Wales will be allowed to reopen from Monday.

However, Scottish First Minister Nicola Sturgeon gave no indication that the ban in Scotland would be eased. Her intransigence on the issue is evidence that the government’s united front is crumbling.

For cleaners and nannies, the lockdown has already been eased, according to guidance released this week stating that domestic helpers can ‘continue work’ in people’s homes provided they have no symptoms.

Mr Johnson is believed to drop the ‘stay at home’ slogan during his televised address at the weekend, although No10 has been frantically downplaying the scale of the changes.

Ms Sturgeon stopped short of announcing any loosening at her briefing in Edinburgh on Friday, saying the ‘only thing’ they are looking at is permitting more outdoor exercise.

She also took aim at Mr Johnson over ditching the ‘stay at home’ mantra, saying that was her ‘main message’ and she would be keeping it ‘for the immediate future’. ‘You must stay at home. Please stay at home,’ she said. 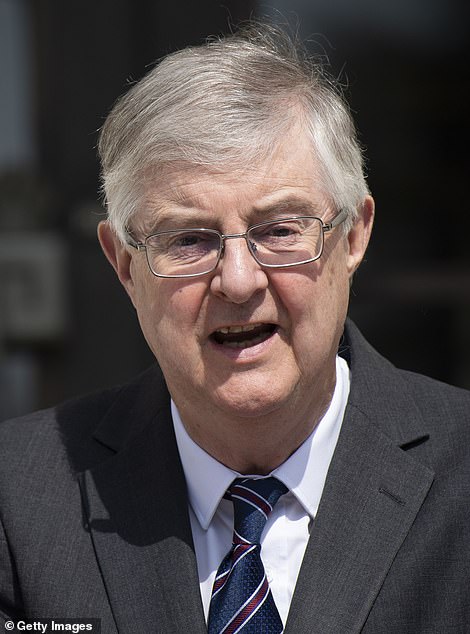 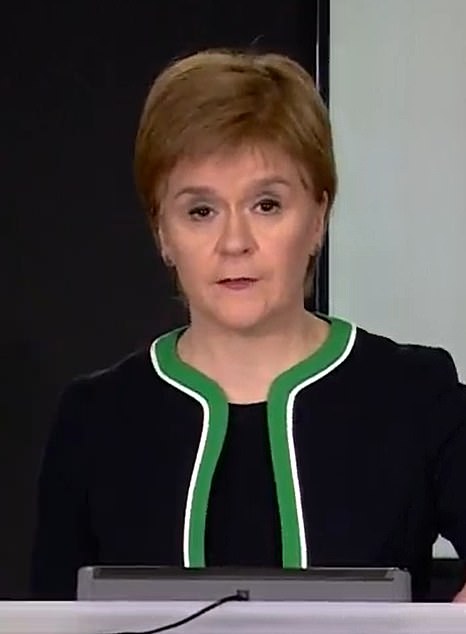 Welsh First Minister Mark Drakeford (left) preempted the ‘exit strategy’ from Westminster as he declared that only ‘small and modest’ easings are possible to avoid coronavirus flaring up again. Nicola Sturgeon (right) stopped short of announcing any loosening at her briefing in Edinburgh, saying the ‘only thing’ they are looking at is permitting more outdoor exercise 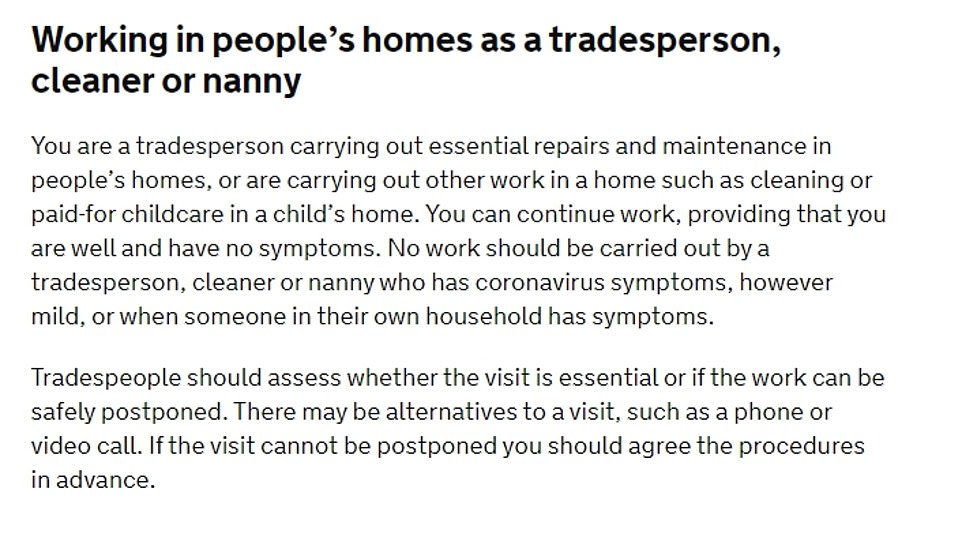 Guidance slipped out earlier this week states that domestic helpers ‘can continue work’ in people’s homes, ‘providing that you are well and have no symptoms’. It also confirms that tradespeople can carry out maintenance 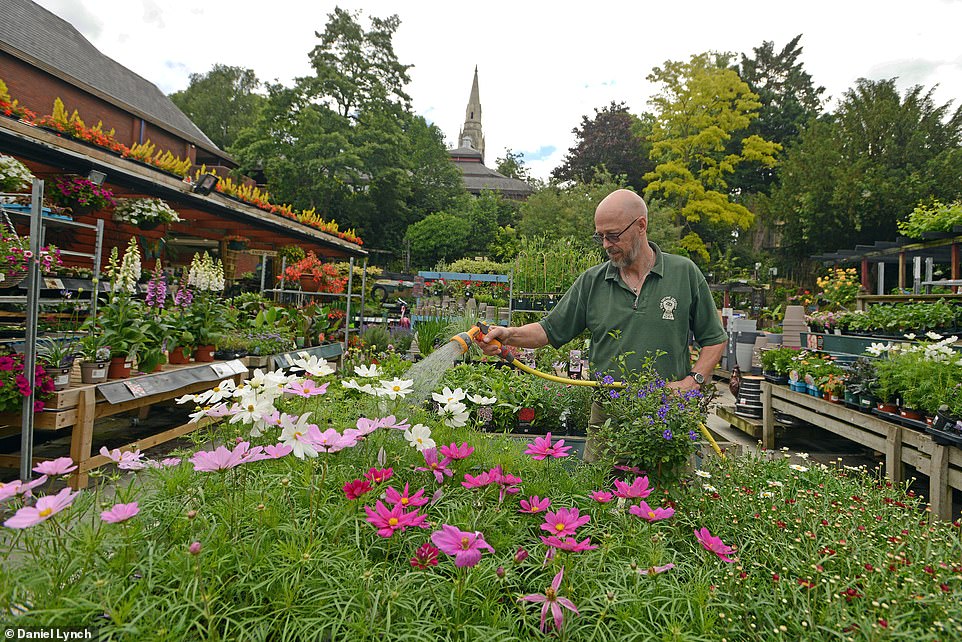 Garden centres will be allowed to reopen next week under the Johnson government’s plans to ease the lockdown imposed in response to the virus (pictured, the Secret Garden garden centre on Westow Street) 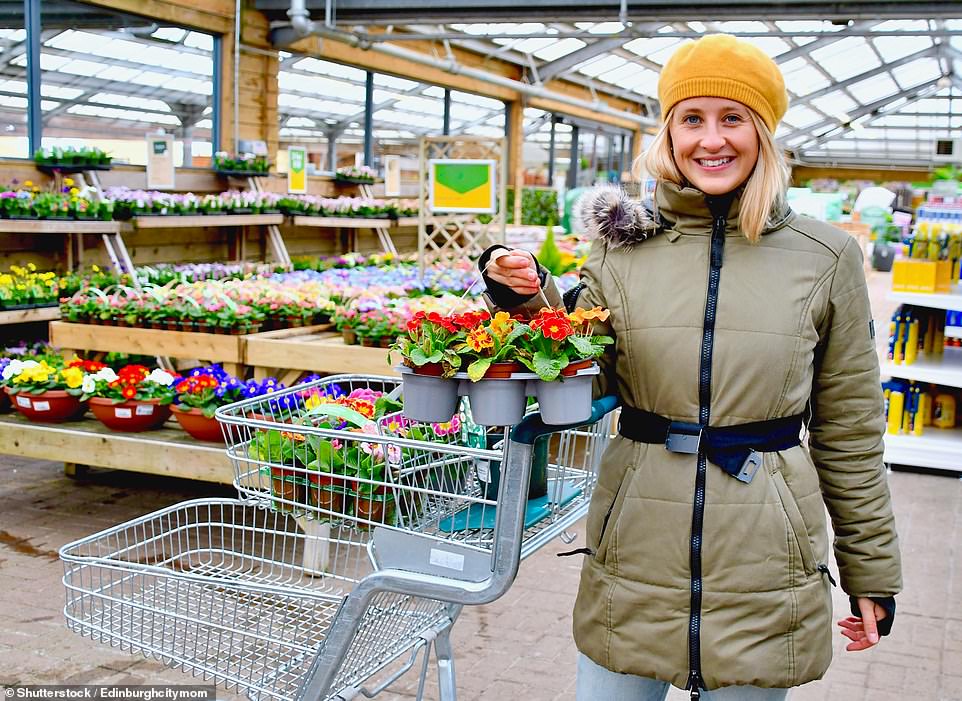 Garden centres will let customers visit again from Wednesday provided social distancing and hygiene measures are in place. Cleaners and tradesmen such as plumbers will also be urged to go back to work (pictured, in Edinburgh) 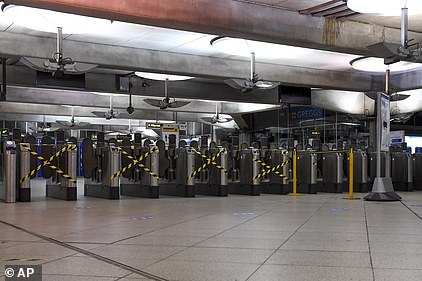 A deserted Westminster Underground Station from May 8

Three out of four Britons believe lifting the lockdown now would be a bad idea, although almost half believe it would be the correct decision in three weeks’ time.

Just 15 per cent of the public, according to a new opinion poll, believe Prime Minister Boris Johnson should immediately lift the Covid-19 restrictions.

YouGov questioned 1,644 British adults between May 7-8. The poll was commissioned by Sky News.

According to the figures, the public are ‘very opening’ to easing the restrictions in June.

One in five Britons would oppose lifting the lockdown in three weeks’ time, though almost a third of the population are undecided.

The poll shows that 46 per cent believe it would be a good idea to ease restrictions in three weeks’ time.

Ministers will finalise a 40-page ‘road map’ setting out an exit plan from the lockdown ahead of his statement.

This is expected to include advice to wear ‘face coverings’ in enclosed spaces where social distancing is difficult, such as on public transport and in shops.

These will include ending the once-a-day restriction on outdoor exercise and lifting the ban on sunbathing in parks, provided people keep a safe distance from each other. Garden centre operators have warned they face ruin if they cannot shift their stock.

From Wednesday, garden centres will be allowed to open across England, but tea rooms, playgrounds and soft play areas will have to remain closed.

A government source told the Mail: ‘We have heard the calls from garden centres, who are in a very difficult position because of the nature of their business.’

The Prime Minister is also expected to encourage sectors not directly affected by the lockdown to resume operations. This will include construction firms and those working in other people’s homes such as cleaners, plumbers and carpet fitters.

They will be issued with new advice for operating safely, including keeping open internal doors and staying two metres away from homeowners. They will also have to accept electronic payments rather than cash.

Ministers are in discussion with rail firms about increasing services from May 18 as people return to work.  But office workers will be told to continue working from home indefinitely.

And the Prime Minister is not expected to make any immediate change to the bans on social gatherings or the closure of pubs, shops and restaurants.

Speaking at the Downing Street press conference, Environment Secretary George Eustice said: ‘There isn’t going to be any dramatic overnight change. We’ve to be very cautious, we are not out of the woods yet.’

Ministers are also considering increasing fines for people who break the rules and introducing a 14-day quarantine for those arriving from abroad.

The PM wants to continue with a UK-wide approach. But yesterday there were signs this was beginning to fracture.

Education Secretary Gavin Williamson is hoping to get primary schoolchildren back to school after half-term at the end of this month, although he is yet to set a firm date.

Welsh First Minister Mark Drakeford said schools in Wales would not go back at the start of June. And Ms Sturgeon said her government was only easing the once-a-day exercise rule.

Meanwhile, the Johnson government came within a whisker of its 100,000-a-day virus testing target for the first time this week, conducting 97,029 on Thursday.

Progress has been held back by ‘technical difficulties’ at one of the major testing laboratories.

Mr Johnson has set a target to increase capacity to 200,000 tests a day by the end of this month. 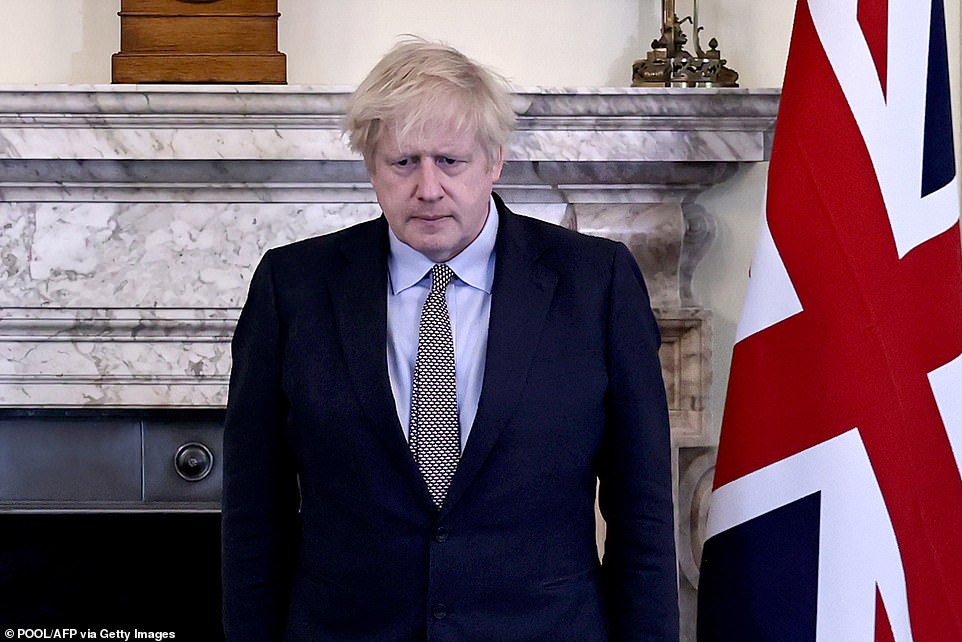 The Prime Minister is also expected to encourage sectors not directly affected by the lockdown to resume operations. This will include construction firms and those working in other people’s homes such as cleaners, plumbers and carpet fitters

Presently the ‘R number’ – the rate at which the virus is spreading – is between 0.5 and 0.9 across Britain, according to the government. That would indicate the disease is currently under control.

In the community it is said to be considerable lower, perhaps as little as 0.2, meaning it is disappearing quickly.

But there are fears that in care homes that number is above 1, meaning the outbreak there is still growing exponentially, with each infected person in turn passing it on to more than one other.

An expert advising the Scottish government dismissed the prospect of restrictions on outdoor activities being eased.  Professor Devi Sridhar said although there was evidence transmission was less likely outside: ‘I think we need to have actual confirmation of that through multiple studies before easing measures.’

But with the Bank of England warning that the restrictions have sparked the deepest recession for 300 years, some Tory MPs are urging Mr Johnson to act swiftly to prevent an economic depression.

A fifth of Britons would consider deliberately getting infected with coronavirus if the government introduces ‘immunity certificates’, an exclusive poll for MailOnline has revealed.

Some 19 per cent might try to catch the potentially deadly disease if it meant they were able to return to ‘normal life’.

The shocking finding, revealed by Redfield and Wilton Strategies, comes as scientists race to produce an antibody test that can show who has had the virus, and emerged with a degree of immunity.

Ministers have been discussing introducing a system of mass screening that could free such people from lockdown, allowing them to return to work and see family, safe in the knowledge they are not fueling the outbreak.

However, the government’s experts have warned that there could be significant social consequences from the regime.

Documents disclosed earlier this week revealed they fear employers could shun workers who have not had coronavirus , prompting people to actively try to catch the disease or obtain fake test results on the blackmarkets.

69 per cent said they would support a system of ‘immunity certificates’ if tests are produced; 16 per cent opposed.

A third thought it would reward those who had flouted social distancing rules. 41 per cent said it would not.

While 71 per cent said they would not deliberately try to catch the disease, a fifth insisted they would consider it, with another 10 per cent saying they were not sure.

Scientists believe those who have recovered from coronavirus get some level of resistance to the disease, but how much and how long it lasts has yet to be shown for certain. Total immunity has already been ruled out.