Trump has been attacking the Fed – and Powell personally – for the central bank’s interest rate increases.

But Mnuchin pushed back Saturday in a pair of tweets.

Mnuchin says he spoke with Trump and Trump said that, while he ‘totally’ disagrees with Fed policy, he ‘never suggested’ firing Powell and doesn’t believe he has the right to do so.

No Fed chairman has ever been removed by a president.

CNN and Bloomberg, citing unnamed people familiar with the matter, said that Trump was furious when the Fed raised the key borrowing rate on Wednesday and signaled it will continue to hike rates next year.

The Dow Jones Industrial Average closed the week with yet another steep decline, its worst week in 10 years.

Powell, chosen by Trump for the job, took over the key post for a four-year term at the helm of the U.S. central bank in February, replacing Janet Yellen.

Trump’s aggressive trade policies combined with the strong US dollar have created fears of slowing U.S. and global growth, and caused stock markets to retreat. 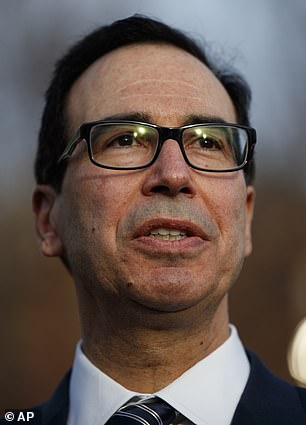 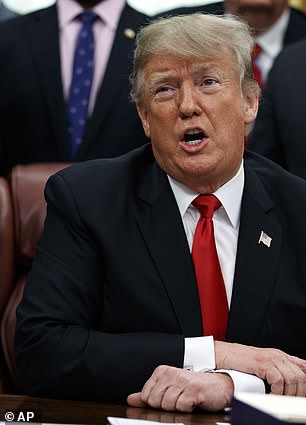 Mnuchin (left) says he spoke with Trump (right) and Trump said that, while he ‘totally’ disagrees with Fed policy, he ‘never suggested’ firing Powell and doesn’t believe he has the right to do so 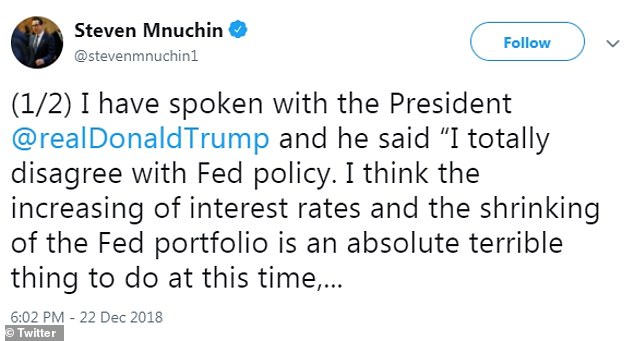 On Tuesday, Trump warned the Fed not to make ‘yet another mistake’ by raising interest rates, the second consecutive day he has gone after the central bank on Twitter.

Trump has ignored the US president’s traditional respect for the Fed’s independence.

He has called the Fed ‘crazy’, ‘out of control’, and a greater economic threat than China.

An attempt to end Powell’s term early however would be a direct attack on the independence of the powerful institution, which plays a major role in the world’s largest economy, and likely create havoc in the stock market.

In October, Trump said he had no intention of firing Powell, but in November he declared that he was ‘not even a little bit happy’ with Powell.

It was unclear if Trump has the authority to fire Powell, according to U.S. media.

A Fed spokesperson was not immediately available for comment when contacted by AFP.

Senator Richard Shelby, a Republican from Alabama, is a former head of the powerful Senate Banking Committee.

He is currently chairman of the Senate Appropriations Committee.

Shelby told Politico that the President ought to be ‘very careful’ in his approach toward the Fed chair.

‘The Federal Reserve is set up to be independent of the presidency,’ Shelby said.

‘Although I disagree with Powell at times, I’ve been on the Banking Committee longer than most people ever have, and I chaired it. 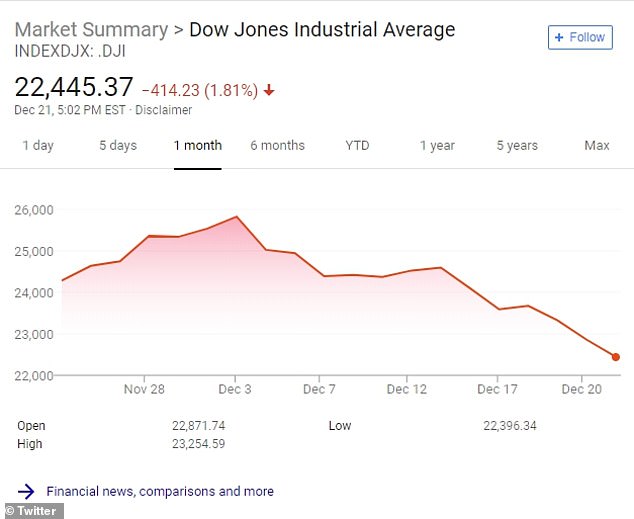 The Dow Jones Industrial Average closed the week with yet another steep decline, its worst week in 10 years

‘I think the Federal Reserve should remain independent, as much as it can.’

Another Republican Senator, Pat Toomey of Pennsylvania, said: ‘Powell has done nothing to warrant being dismissed.’

‘After a long and dangerous experiment in monetary policy, conducted by others, Chairman Powell has gone a long way to restoring normalcy,’ Toomey said.

‘We should be grateful for that.

‘I have no reason to believe that the president is planning to fire Chairman Powell.

‘He certainly should not do so.’

A senior official close to the White House told Politico that an attempt to fire Powell would sow chaos in the markets.

‘It would be an outrageous thing to do and markets would treat it that way,’ the official said.

Legally, even if Trump wanted to fire Powell, it doesn’t appear he can.

‘The President can nominate a chair but once the chair is confirmed, the president is out of it and the only way you can remove a chair from office is literally if they broke the law,’ Ellen Zentner, the chief U.S. economist for Morgan Stanley, told CNBC.

‘Congress will have to find a cause to remove them from office through a vote and a procedure.’