Treating depression after a heart attack could help to prevent patients from having another life-threatening cardiac episode down the road, new research suggests.

After a first heart attack, both depression and a second heart attack are very common, with about 20 percent of people having another heart event within a year and about a third developing depression.

Depression not only affects mental clarity and mood, but puts the body under stress too, raising blood pressure and risks for another heart attack.

But starting a patient on antidepressants immediately after their first cardiac episode disrupts their life may drastically reduce the odds of a recurrence by 23 percent, new research carried out by South Korean and British scientists suggests.

Heart disease and its complications still kill more people than any other single cause of death in every country in the world, including the US.

Rates of depression are similarly high in the US, with about 16.2 million adults suffering the common mental illness – and those numbers are rising.

Depression is particularly common and debilitating to older Americans, and heart patients are at even greater risk of developing the mood disorder.

Someone who has had a heart attack is more than twice as likely to develop depression as an adult who has never had a serious heart problem.

Heart problems and depression can form a kind of cycle. Some patients may feel depressed because they have poor heart health and depression may contribute to the heart’s further deterioration.

Depression can harm the heart through both behavioral and biological pathways.

Heart-healthy habits and activities like healthy eating and regular exercise are simply not on the standard agenda for a depressed brain.

In older adults – who comprise the vast majority of heart patients – depression often doesn’t manifest as ‘sadness,’ but as a lack of motivation or feelings of sluggishness and apathy.

This can result in patients who are eating poorly, staying sedentary and forgetting or skipping medications.

While these good habits seem like lower priorities during bouts of depression, destructive activities like drinking and smoking tend to ramp up more and more as a person’s mood falls lower.

In tandem, these two effects can throw off the heart’s natural rhythm. Johns Hopkins even warns that the combination of depression and heart arrhythmias in patients hearts weakened by prior cardiac events seem to be particularly fatal.

There is also evidence linking changes in the composition of blood platelets to depression.

In patients living with the mood disorder, blood platelets seem to be more ‘sticky.’

Platelets allow blood to clot, which is crucial to keeping us from bleeding to death, but these extra-sticky platelets can cause these blood cells to stick to the inside walls of arteries, making them thicken and harden more quickly. 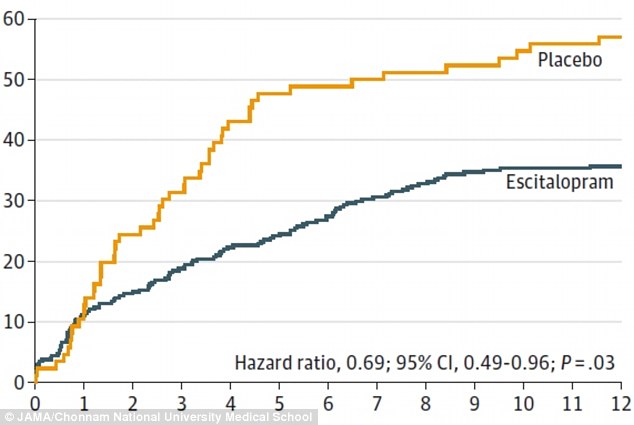 This can worse and accelerate the development of atherosclerosis, a condition that can cause a stroke, fatal blood clot or another heart attack.

But the life-threatening overlap between depression and cardiac damage may be at least partially treatable, new research suggests.

Researchers in South Korea and the UK treated 300 patients who had had a heart attack and symptoms of depression with either a common antidepressant – escitalopram, the generic name for Lexapro – or a placebo.

Each participant took their prescribed medication – whether real or sham – for 24 weeks, and the researchers followed all of these patients for about eight years.

Over the course of those years, 53.6 percent of those who took the placebo had a second major cardiac issue, but only 40.9 percent of those on antidepressants had a recurrence of any kind serious heart problem.

The findings not only underscore the connection between mental and physical health, but antidepressants may offer a very cost-effective way to improve quality of life and reduce future heart attack risks for patients that have already suffered enough.