Treating psoriasis with injection drugs may cut inflammation in the vital arteries that feed the heart, a study published Wednesday suggests.

Psoriasis, like lupus and rheumatoid arthritis, is an inflammatory autoimmune disease, suffered by millions of Americans, including model Cara Delevigne and Kim Kardashian West, who has opened up about the condition since her 2011 diagnosis.

The inflammation that leads to the red and scaly patches of the skin condition raises risks for developing heart disease as well by causing the coronary arteries to constrict.

So scientists at the National Institutes of Health (NIH) conducted experiments to see if a treatment for psoriasis could treat coronary inflammation too.

Remarkably, they found that the treatment worked – for both psoriasis and coronary inflammation, suggesting a novel way to counteract the dangerous effects of inflammatory diseases on the cardiovascular system.

Some three to five percent of Americans develop psoriasis, raising their risks for heart disease, the number one killer in the US.

These risks underscore the fact that psoriasis is much more than a cosmetic issue.

This bombardment leads to an overproduction of skin cells that build up in plagues or patches and redness or inflammation, a hallmark of an immune system’s counterattack to infections.

Immune system over-reactivity takes a toll on the body.

Inflammation can cause blood vessels to harden and narrow.

And that’s particularly dangerous to the vessels that supply blood to the heart.

Psoriasis is chronic condition, but can be treated with retinoid or steroid topical cremes, light therapy, or drugs, including a class called biologics.

Biologics are potent drugs that alter the immune system to weaken its over-zealous responses.

They’re usually only used as drugs of last resort, however, because suppressing the immune system leaves people more vulnerable to life-threatening infections.

To test their effects on coronary arteries, the researchers recruited 134 patients who had been suffering from moderate to severe psoriasis and hadn’t been treated with a biologic for at least three months.

Participants were given a choice: try biologic injections or undergo light or topical therapies and be part of the control group.

Of those, 82 decided to try the biologics.

The researchers at the National Heart, Lung and Blood Institute (NHLBI) used CT scans to peer into the participants’ blood vessels at the start and throughout the study. 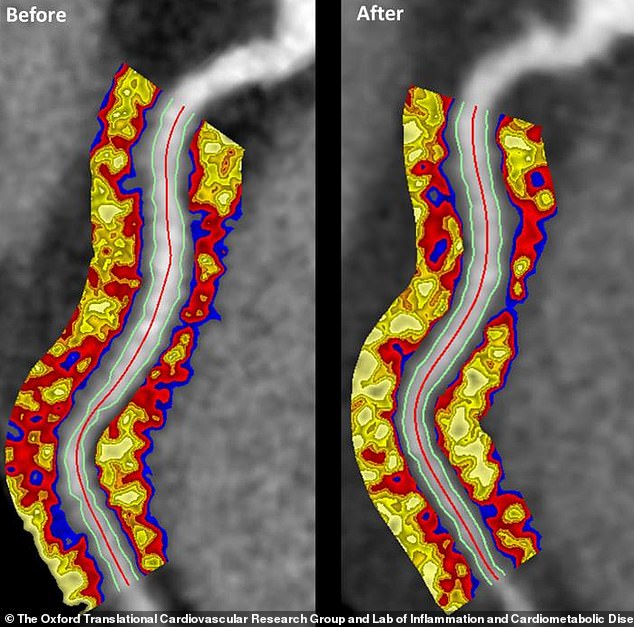 CT imaging shows high fat plaque buildup in a patient’s blood vessel at the study’s outset (left, shown in red) and the dramatic reduction a year after first getting biologic treatment (right)

Everyone was at low risk for cardiovascular disease when they joined the study, but some already had significant buildup of the fatty plaques in the linings surrounding their arteries, according to their initial scans.

These fat deposits are predictive of heart attacks, stroke and heart failure, life-threatening cardiovascular events that are between six- and nine-fold more common in people who score high on a blood vessel fat scale.

But a year later, everyone who had been getting the biologic treatment – including those whose arteries were already fat-ridden – had marked improvements.

Far less of this so-called perivascular fat was visible in their second scans.

‘A key lingering question was if we could modify it using anti-inflammatory interventions,’ said Dr Nehal Mehta, a cardiologist and head of the Lab of Inflammation and Cardiometabolic Diseases at NHLB.

‘As far as we know, our study is the first to assess potential effects of biologic therapy on coronary inflammation using the measure [of perivascular fat].’

At least one NIH study, published in February, has also indicated that biologics might confer benefits for blood vessels.

The study authors are hopeful that these injections can help to neutralize heart disease risks not just for psoriasis sufferers but for those who have other inflammatory autoimmune diseases like lupus and rheumatoid arthritis.

Systemic inflammation – often from these conditions – places between 20 and 30 percent of Americans at an elevated risk for heart disease-related catastrophic health problems.

‘Our findings add to the growing body of research that shows treating underlying inflammatory conditions may reduce the risk of cardiovascular diseases,’ said Dr Mehta.