Treatt has warned that rising costs, slowing demand for tea drinks in the US and a weaker pound will hit profit in its soon-to-end financial year.

The Suffolk-based, UK-listed ingredients maker, which makes natural ingredients and flavourings used in drinks and food, as well as fragrances used in household goods, saw shares tumble 32 per cent to 550p as a result.

Analysts have often pointed to the AIM-listed firm as a recession-proof stock as it has seen stellar growth over the past decade, having risen by around 700 per cent since August 2012.

Bitter taste: Treatt’s profit margins have been dented by a weaker pound, rising costs and lower demand for tea in the US

However, Treatt shares have not been immune from recent stock market volatility.

They have lost around half of their value compared to a year ago and remain some 60 per cent below their peak of almost £13 at the end of last year.

Treatt told investors on Monday it still expects ‘strong’ sales growth this financial year, which ends at the end of September, thanks to its ‘excellent’ order book.

But it added that ‘a number of separate factors which will impact profitability for the full year’, with pretax profit now expected to come in between £15million and £15.3million, down from previous forecasts of £21.7million.

The company has responded to a ‘significant’ rise in input costs by hiking prices, but said it could not raise them across the board due to long term contracts.

The devaluation of the pound has also had a ‘significant’ impact on its profit margins as its UK business makes a portion of its sales in US dollars and uses foreign currency exchange contracts to manage risk.

Meanwhile, it has been hit by a fall in demand for tea in the US, while repeated Covid lockdowns have resulted in the loss of ‘some higher margin revenue’ at its Chinese subsidiary.

‘As has been well-documented, consumer confidence in the US has deteriorated in recent months causing lower demand in this category which has materially reduced our margins,’ Treatt said. 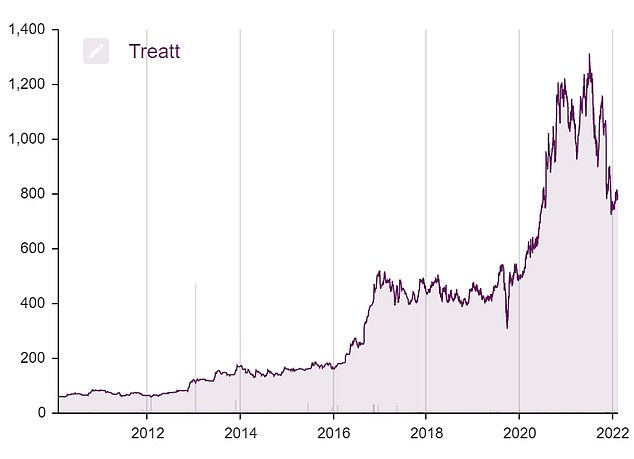 Treatt shares have seen stellar growth over the past decade, but have fallen by around 60% from their peak of around £13 at the end of last year

The company employs over 400 staff in Europe, North America and Asia and has manufacturing facilities in the UK and US.

It makes natural ingredients and flavourings used in numerous products, including beer and spirits, tonics and flavoured water, tea and coffee, crisps and other savoury snacks. They are also used in soaps, hand cleansers and general cleaning products.

Treatt floated on the stock market in 1989 and has never missed a dividend since.

Chief executive Daemmon Reeve said that, despite the expected lower profit, the group continued to see ‘strong momentum’ in all its products, especially for natural extracts used in drinks.

‘Whilst clearly disappointed by the short term impact on profitability, we remain encouraged by the underlying trading performance of the business and are confident in the long term growth drivers for Treatt,’ he said.

‘We have significant opportunities across our categories and geographies and, notwithstanding the short-term impacts in Tea, we see strong momentum in all of our categories given the alignment with prevailing consumer trends.

‘For example, there continues to be sustained growth in demand for our natural and authentic extracts and bespoke solutions for a wide range of beverages.’