It’s been dubbed an easy way to get dazzling, white teeth, with X-Factor judge Nicole Scherzinger being a known advocate.

But experts are concerned about trendy charcoal toothpaste.

They warn the gritty black stuff won’t make your teeth white overnight, despite the ‘misleading’ claims from some celebrities with Hollywood smiles.

Charcoal toothpaste could have the opposite effect and even lead to cavities – failing to stop decay that erode the shiny enamel, making teeth appear yellow.

The Oral Health Foundation is worried that consumers are using these products without fully knowing what they contain.

‘The number of charcoal toothpastes on the market is growing rapidly and are being marketed at through instafamous celebrity endorsements, but we believe shoppers may be being misled.

‘Much of the time the celebrity has had professional tooth whitening and their white smiles are not a direct result of using the product.

‘From a whitening perspective, there may be anecdotal evidence of their whitening potential but any effect they have will likely be superficial.

‘Many toothpastes which claim to whiten our teeth are simply removing surface stains, and will not offer the long lasting bright white smiles which many users may be looking for, or being promised though advertising.’

He added: ‘It is important to understand the only way to get the white teeth many desire is through professional whiting services provided by a dental professional.’ 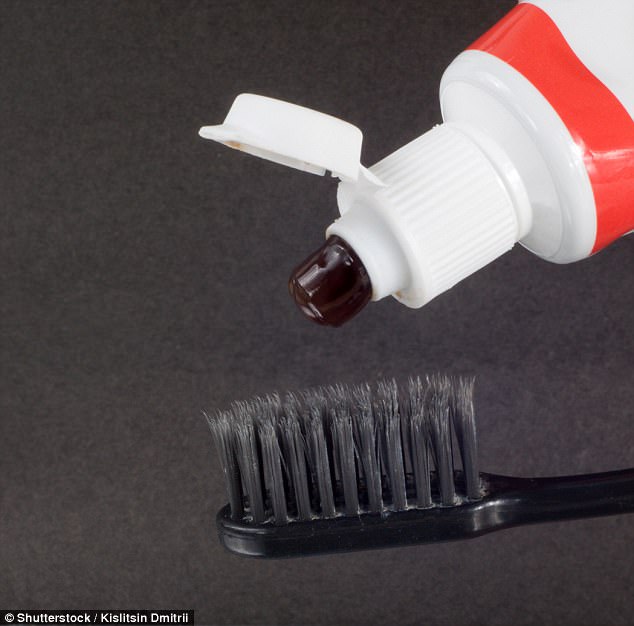 Charcoal toothpaste could have the opposite effect and even lead to cavities – failing to stop decay that erode the shiny enamel, making teeth appear yellow

University of Maryland experts have also suggested there to is no robust evidence which currently supports the claims charcoal can whiten teeth.

Their review, published in the Journal of the American Dental Association, reviewed 118 articles about charcoal toothpaste medical literature.

THE SCIENCE BEHIND THE TREND

This trend involves brushing teeth using an activated charcoal – the product comes as in capsule form or as a powder – mixed with water to create a paste which is then applied to a brush and used to scrub teeth.

It’s believed charcoal can absorb tannins – these are the compounds found in coffee, tea and wine that stain your teeth.

And it’s also claimed the gritty black stuff has the power to eliminate toxic bacteria which cause bad breath.

While many claim the product has miracle whitening properties, Sydney-based cosmetic dentist Dr Luke Cronin warned against embracing the trend because there’s limited evidence to support if it’s any good for you, or your teeth.

‘It’s unclear if activated charcoal is safe as there are concerns that it may be too abrasive to use on your teeth and gums,’ he said in August.

The same analysis also suggested the products can be harmful as they don’t contain the effective ingredients to prevent tooth decay.

But many of the current toothpastes which contain activated charcoal fall well below this level, putting users at risk of cavities.

He said: ‘Bleaching products used by dentists safely remove deep and surface stains from the teeth, whereas this charcoal-based product is untested and a gamble.

‘Using it as a substitute for standard toothpaste means you will also miss out on the benefit of fluoride.’

Nicole Scherzinger, who rose to fame as the lead singer of The Pussycat Dolls, told the Daily Mail in November that coal is the secret to her brighter than white smile.

Revealing her more unusual beauty secrets the singer said she had used coconut oil on her teeth in the past but that she preferred to brush her teeth with coal.

Speaking at the time she said: ‘I’d much rather brush my teeth coal, which I’ve done. That’s even better. Makes your teeth whiter.’