‘People say things but I come out and perform for the team’: Trent Alexander-Arnold hits back at his critics after his sublime free-kick sets Liverpool on their way to comfortable 2-0 win over Rangers

Trent Alexander-Arnold produced a moment of brilliance to potentially transform his season as Liverpool eased past Glasgow Rangers in the Battle of Britain.

Alexander-Arnold has suffered the first major dip of form in his career and was axed from England’s squad last week for the Nations League clash with Germany at Wembley.

But he stepped up in the seventh minute to bend in a beautiful free-kick that set Liverpool on their way to a 2-0 win in their first competitive meeting with the Scottish giants.

Liverpool are now in control of their destiny to qualify for the Champions League knockout stages but Alexander-Arnold was simply relieved to change the narrative around him.

He said: ‘People say things but I come out and perform for the team. It’s been a slow start to the season for me but I’m looking forward to the rest of it.’

In an interview with BT Sport, he added: ‘The performance was great from the lads. On Saturday (when drawing 3-3 with Brighton) it was disappointing, we never got going with our press. We were slow out of the blocks (on Saturday), but this was the complete opposite.

‘We started well and continued it throughout the game. They had their spells in the second half, but I think overall we played to our standard.’ 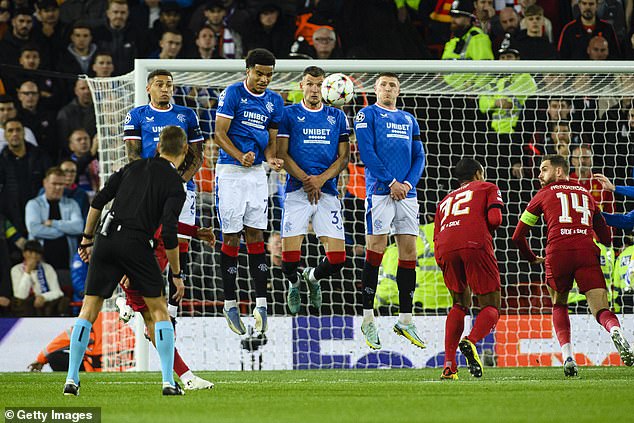 He said after the game: ‘people say things but I come out and perform for the team’

Alexander-Arnold was scoring for the third time this season and he said: ‘I don’t normally score them from that side, I usually score from the other side. You’ve just got to get it on target, that’s what I’ve been focusing on.’

Jurgen Klopp tweaked his system to play 4-2-3-1 and was rewarded with Liverpool’s first clean sheet since September 3 and his satisfaction at seeing Alexander-Arnold deliver such an important moment was evident.

‘He played a good game, defensively especially, and wonderful goal,’ said Klopp. ‘We had a defensive problem, our timing was not right, we take risks in our defending, everyone knows that and these gaps are often on the back of Trent but not because of him. 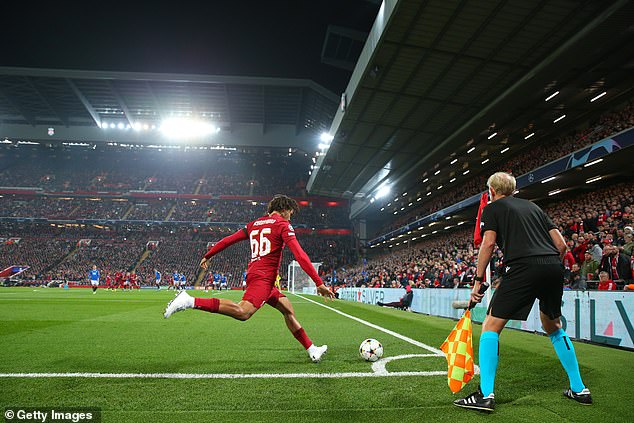 Jurgen Klopp was full of praise for his right back, who played a ‘good game defensively’

‘He has to track back. We were not in the perfect moment so we had to adjust. It was a wonderful goal, what can I say? It is not long ago he scored but I am happy he had that still in his locker.’

Only a heroic performance from Rangers keeper Allan McGregor stopped Liverpool winning emphatically and their manager Gio van Bronckhorst said: ‘The gap is obvious. You don’t have to see the squads. We are competing against one of the best sides in Europe.

‘I think we competed really well. We will learn from this game and we should take those experiences into the next game and the league.’