Images of Ethiopian tribeswomen with lip plates measuring up to 24 inches show the lengths prospective brides in the village will go to in order to attract a favourable husband.

The women of the Suuri Baale tribe, who live to the west of the Omo Valley in Ethiopia, have their two lower teeth removed and their bottom lip sliced at the age of 12 in order to squeeze in the huge clay plate, which helps attract a wealthy husband. A man’s worth in the indigenous tribe is measured by the number of cows he owns.

A series of pictures taken by Thai professional photographer Sarawut Intarob, 37, shows a woman in a headdress made of animal horns, wearing an impressive 20-inch clay plate while another shows a woman’s stretched and shrivelled lips after years of wearing the device.

Other images show an elderly woman with stretched ear lobes and male members of the tribe keeping lookout from a tree.

‘What shocked me most was their oral piercing tradition,’ the Thai photographer, Intarob, said.

‘When they are teenagers, girls decide if they would like large wooden or clay plates in their mouth. They believe that makes a woman even more beautiful.

‘I visited in January 2020 for nine days, and overall felt a beautiful but strange feeling with them. 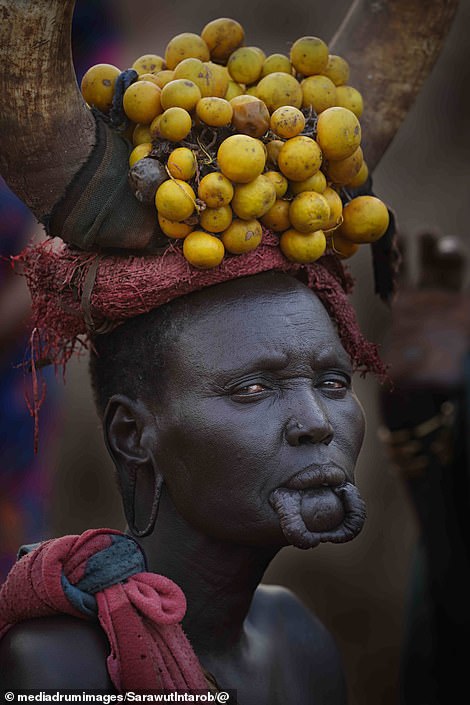 A Suri woman (left) is pictured with a large clay plate which has been inserted between a cut in her bottom lip in Ethiopia. The plates, which can be as big as 16 inches in diameter, are first given to children when they are just 12 years old. An older Suri woman (right) is pictured without the plates in her lip or ears. The women scar themselves by slicing their skin with a razor blade after lifting it with a thorn. The Suri pride themselves on their scarification and how many they have 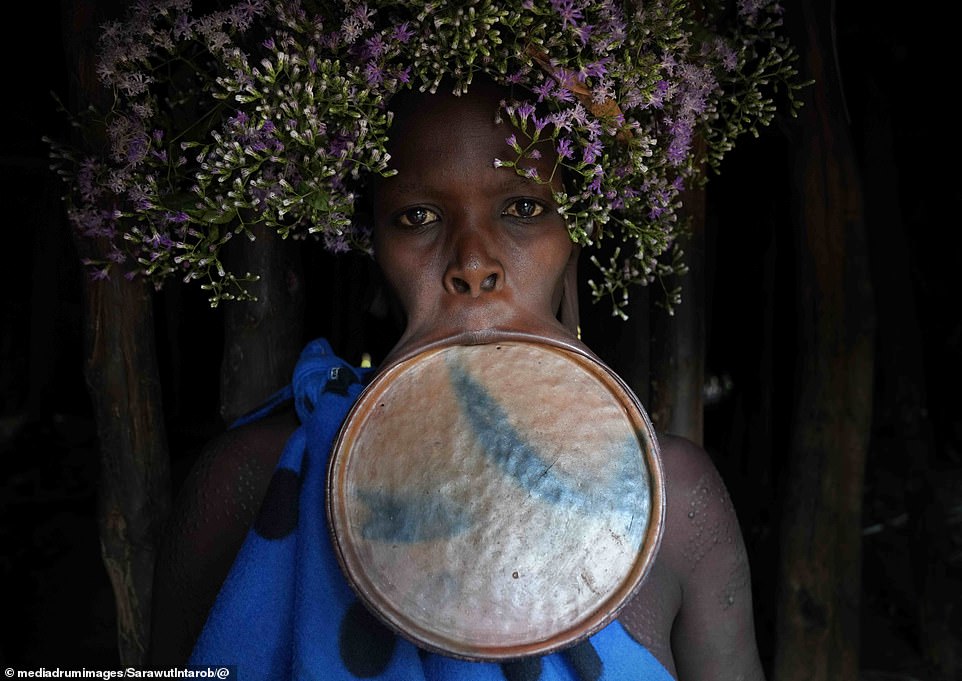 The lip plates, also known as lip plugs, are thought to enhance beauty among the tribespeople. Many of the women will have their bottom teeth removed in order to wear the large clay plates 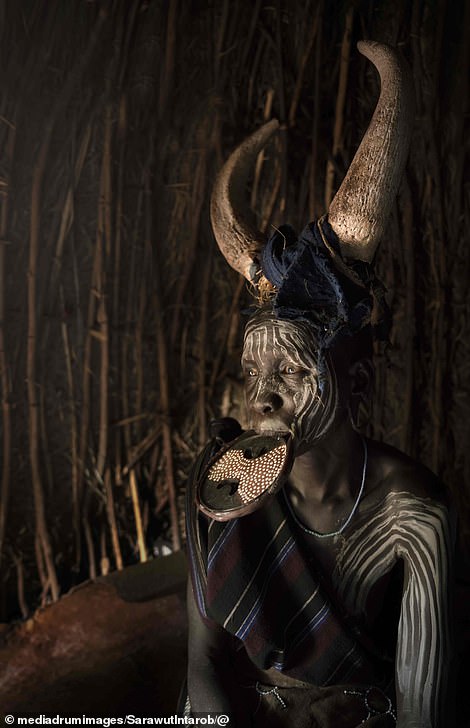 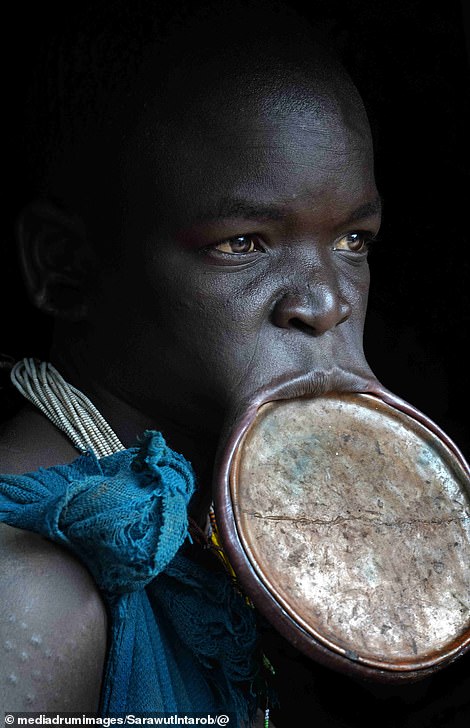 A younger Suri woman with her 16-inch faceplate (right). She will inherit a larger number of cows through marriage due to the size of her plate. The average married male in the Suri tribe owns somewhere between 30 and 40 cows

The Suri Baale people live to the west of the Omo Valley, Ethiopia, and share a similar language with Chai and Timaga ethnic groups.

Collectively, they are known as the Surma. Outside of these two politically and territorially different neighbours, they have no contact with the outside world and are over 60 miles away from the nearest city of Arba Minch, Ethiopia.

Very few even know any Amharic, the official language of Ethiopia.

‘They still live normally and still have the same culture as their ancestors in the twenty-first century.’

At puberty most young girls have their two lower teeth removed in order to get their lower lip pierced for face plates, this usually happens a year before they are to be married.

Sometimes even four teeth are removed to allow a bigger plate inserted, as it is believed that the size represents social and economic importance to the tribe. 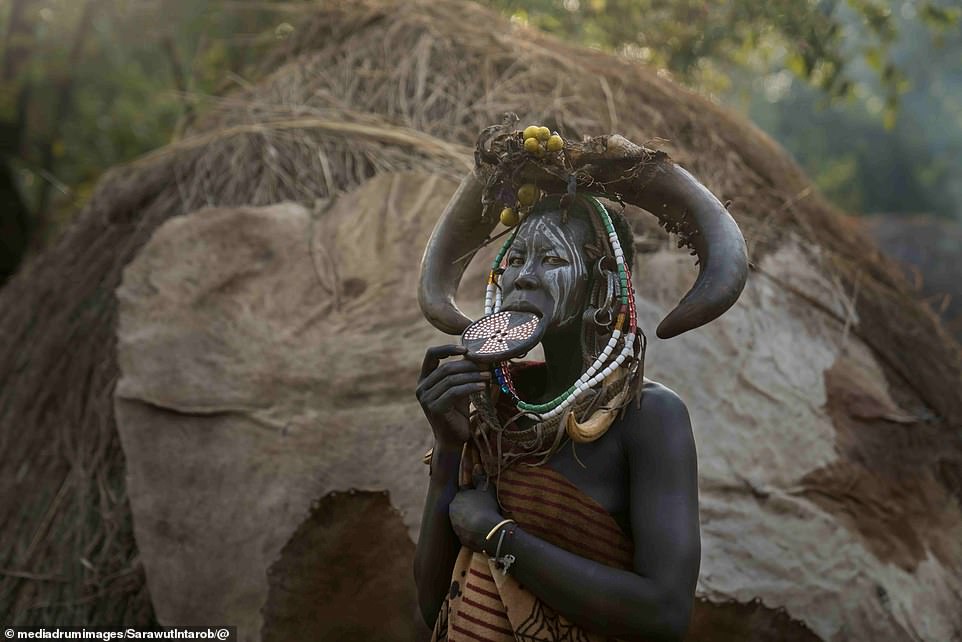 A Suri woman wearing horns as a headdress looks on as she is photographed in the village in Ethiopia. The Suri people are flourishing in their corner of Africa, selling gold to outsiders 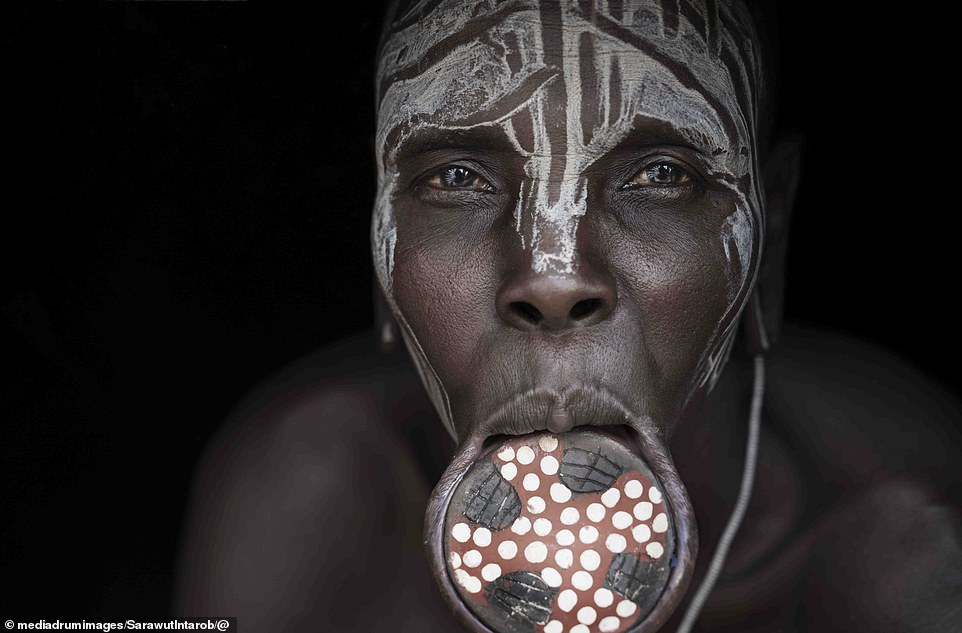 Suri women also pierce their earlobes in order to make themselves more beautiful, but the piercings do not come close to the size of the lip plates 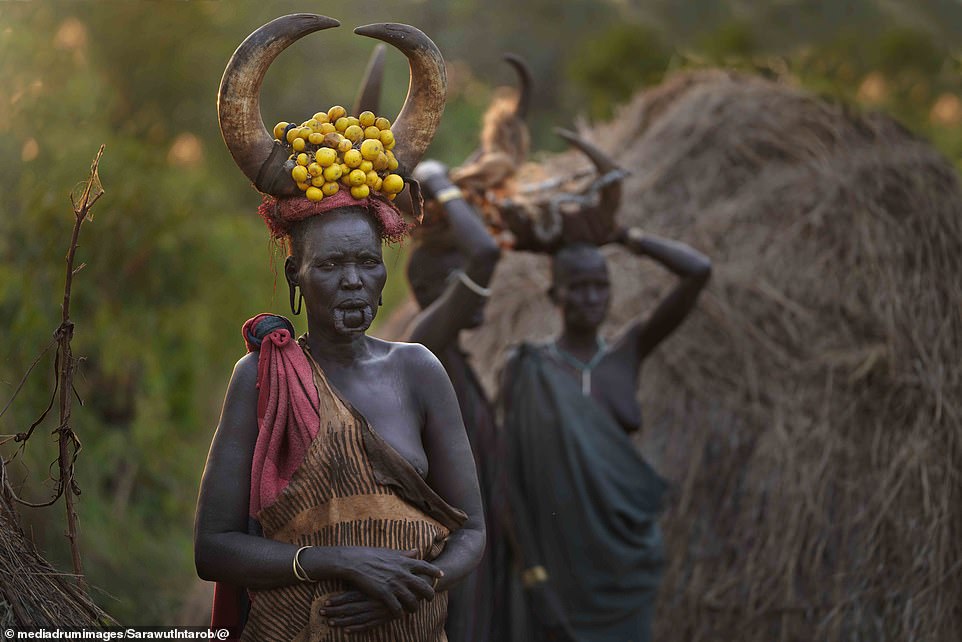 There are around 12 ethnic groups in Ethiopia, but with their face plates and stick fighting sports, the Suri are perhaps one of the most fascinating

The clay plates, which can be as big as 16 inches in diameter, are first given to children when they are just 12 years old.

The larger the plate, the more cows the girl’s father can demand in dowry when his daughter marries. Cattle are enormously important to the Suri people and bring status.

The painful practice is less common in the younger generation of Suri women.

Women and children in the tribe also often decorate themselves with white clay patterns, and flowers on their heads.

One of the fiercest indigenous tribes in the world, stick fighting and living off the land are the norm for the Suri people who own large herds of cattle, which they graze while travelling through Ethiopia. 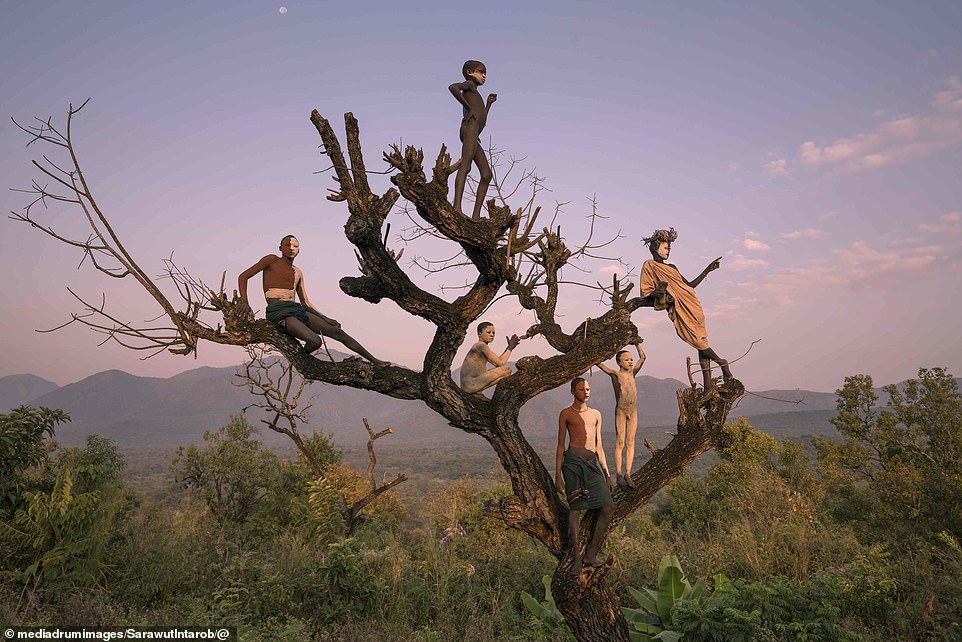 A group of Suri men, who have decorated their bodies with clay, stand guard and look out from a gnarled tree

Until they were formally incorporated into Ethiopia in 1897, Suris had been living on the Sudan-Ethiopian border from the early 1800s, and feeding their cattle on pastures in the Sudan.

Suri villages range between 40 and 2,500 people and village discussions are led by elders and the komoru – a ritual chief.

The Suri have some other extremely painful rituals as well, including scarification and dangerous stickfighting.

Scarification is when the skin is lifted with a thorn then sliced with a razor blade, leaving a flap of skin which will eventually scar.

Traditionally the stick fights were a place where young men could prove themselves to the girls and find a wife. 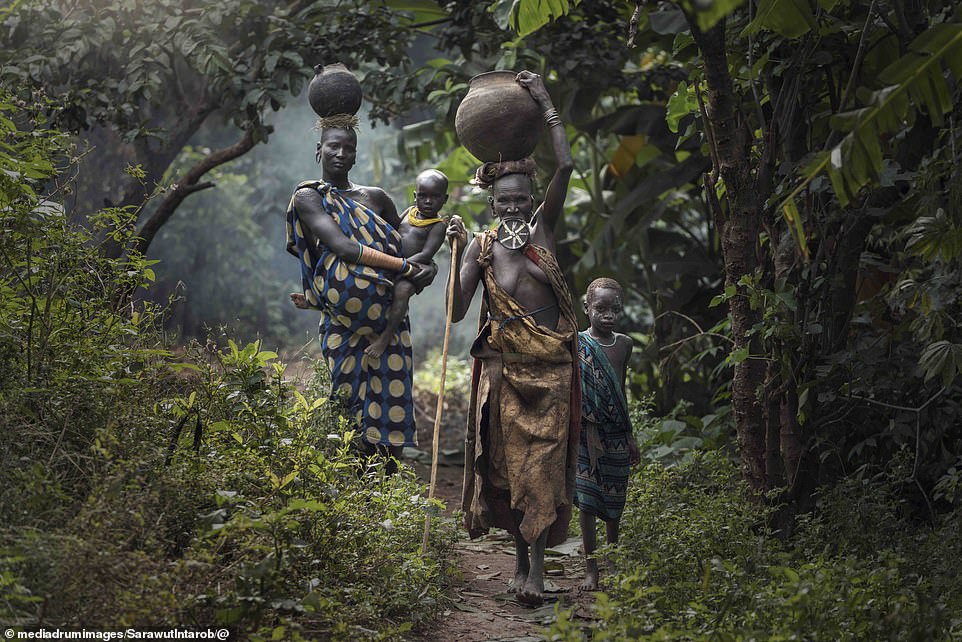 Suri women carry clay pots on their heads, accompanied by their children, through a forest in Ethiopia

No one knows why lip plates were first used. One theory goes that it was meant to discourage slavers from taking the women.

Sarawut was only permitted to visit the tribe if he was allowed to have two guides with him at all times, however he felt nothing but warmth.

‘They apply the make-up by mixing coloured clay with water and sometimes applying to the body. The initial objective was to repel various insects,’ he added.

‘But after doing so often it has become part of their culture and beauty. So sometimes they put flowers on their heads to celebrate various religious events such as housewarmings and weddings.

‘Faces are sometimes painted with white clay paint to protect themselves from the sun, which is dotted on the face and body.

‘They were exciting to meet. Despite the language barrier, they are friendly to tourists and smiled when they saw themselves in the camera.’