Tributes have begun to pour in for Leyton Orient manager Justin Edinburgh, following his tragic passing at the age of 49.

The club led the tributes with a poignant statement from chairman Nigel Travis, in which he admitted everyone at Orient has been left ‘completely heartbroken’ by the news.

Edinburgh had been in hospital after suffering a cardiac arrest on Monday following his return from the Champions League final in Madrid, before Orient confirmed the news of his death on Saturday. 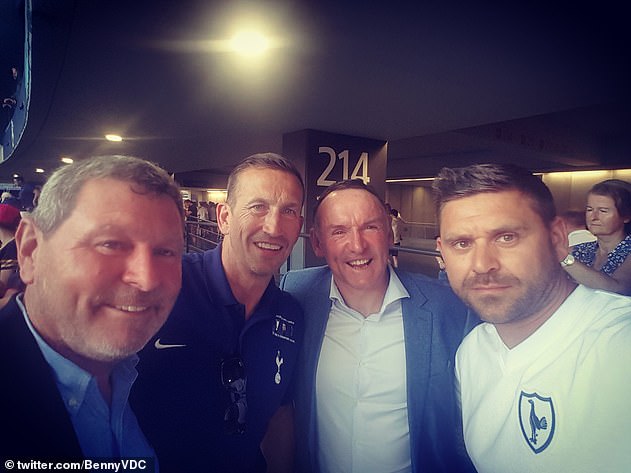 The Tottenham legend had been in the Spanish capital to see his former club play in the final, and Spurs were first among the tributes after the sad news was confirmed.

‘We are deeply saddened and shocked to hear of the passing of Justin Edinburgh,’ Tottenham wrote via their official channels.

‘Our heartfelt condolences and thoughts go out to his family and friends at this terribly difficult time as well as everyone that worked alongside Justin at Leyton Orient.’

Orient striker Macauley Bonne, who benefited from Edinburgh’s guidance, wrote: ‘There are no words to describe the loss of our gaffer, our leader & inspiration. First & foremost, my deepest condolences to Justin’s family. He brought us all together – we’re eternally grateful for everything you’ve done.’

Gary Lineker, who was team-mates with Edinburgh at Tottenham, wrote: ‘Deeply saddened to hear that Justin Edinburgh has passed away. He was an excellent coach and a terrific fullback who was a delight to share a dressing room with and have as a teammate. Thoughts are with his family. #RipJustin’.

Darren Anderton also played with Edinburgh at Tottenham. He wrote: ‘Can’t believe it.. such sad news about Justin..it’s not fair. One of the greatest guys you could ever wish to meet. When you were around him, you just laughed and smiled constantly. RIP mate’. 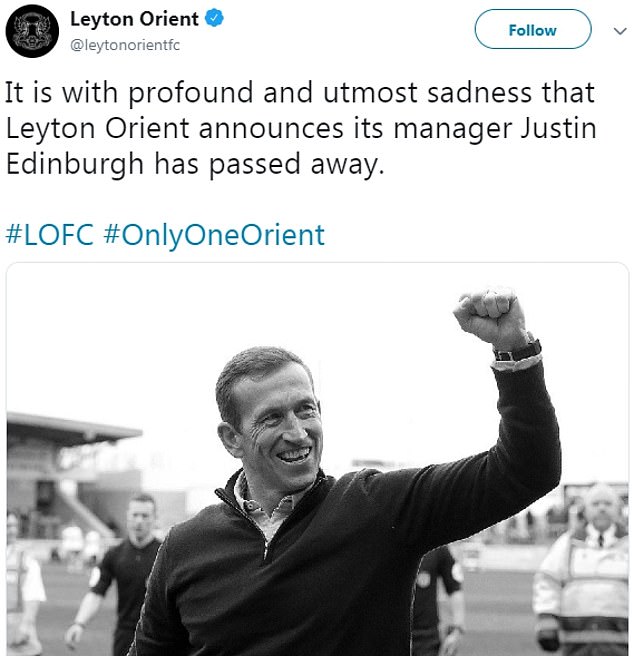 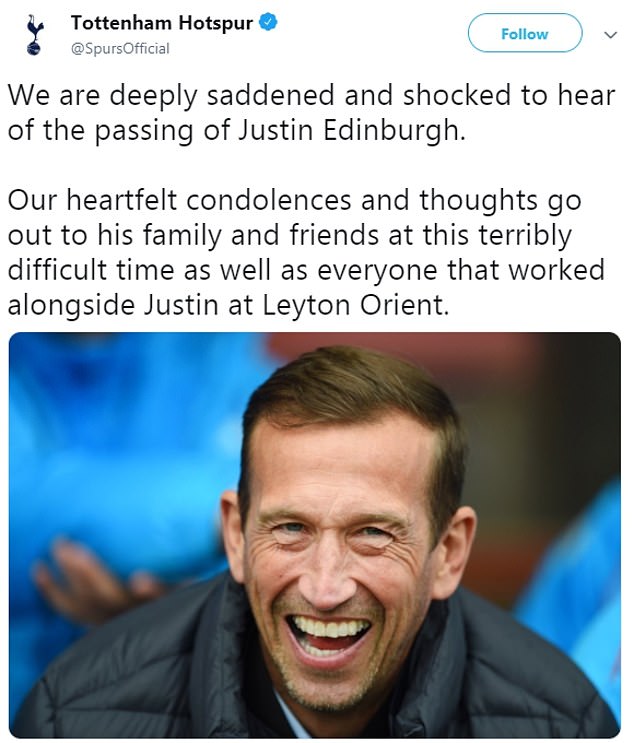 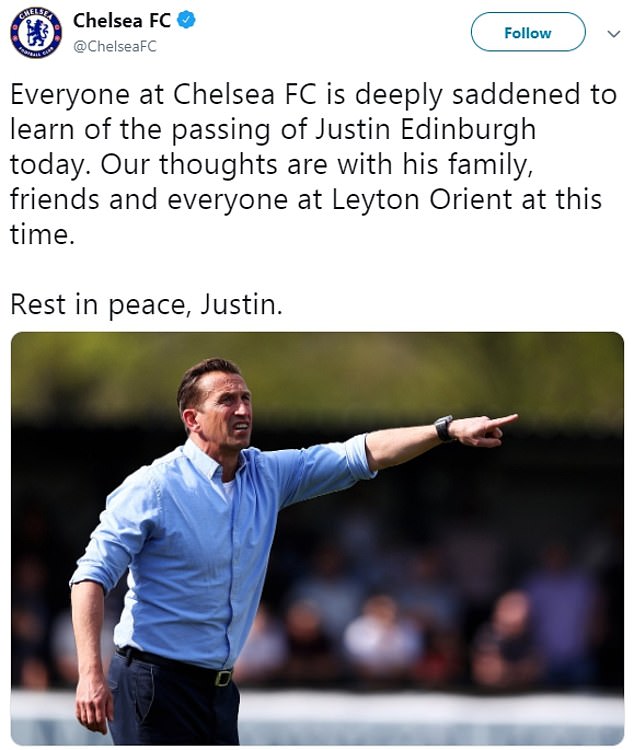 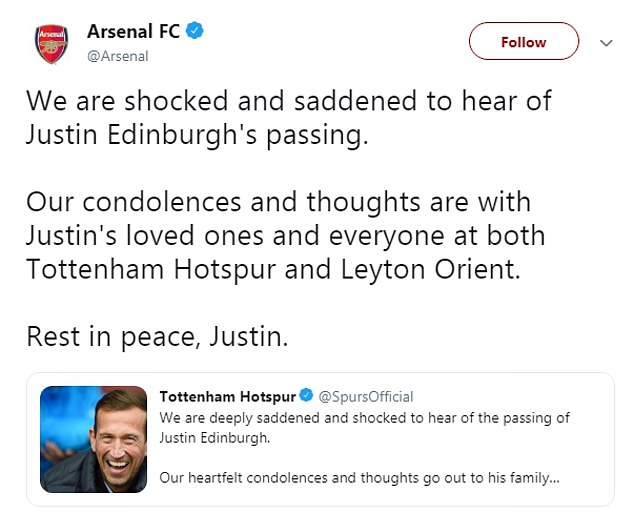 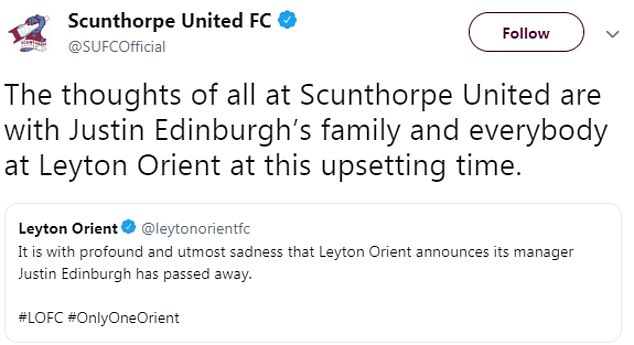 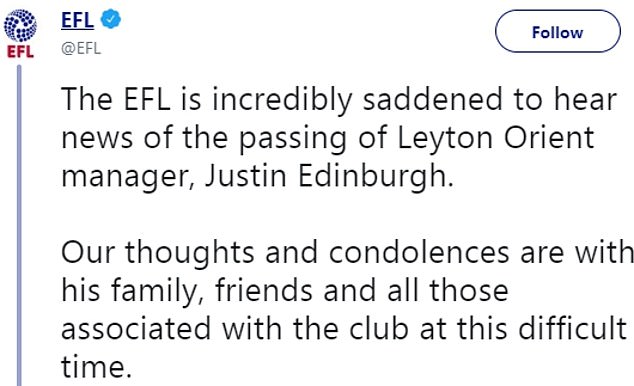 Another of Edinburgh’s former clubs, Portsmouth, paid respects to the late manager in a short statement which revealed their mourning.

Orient chairman Travis paid personal tribute to Edinburgh in his touching statement, writing: ‘The success that Justin brought to Leyton Orient was incredible, but more importantly the impact he had on us all as a winner and a wonderful, inspirational human being will be his legacy and will stay with us forever.’

The football world quickly began to react to the news, with former Manchester United player Gary Neville labeling Edinburgh ‘a Champion that managed a team that played with your spirit.’

Arsenal, Chelsea, West Ham, Burnley, Fulham, Scunthorpe and Accrington Stanley among many others soon followed suit, each releasing their own personal responses to the news. 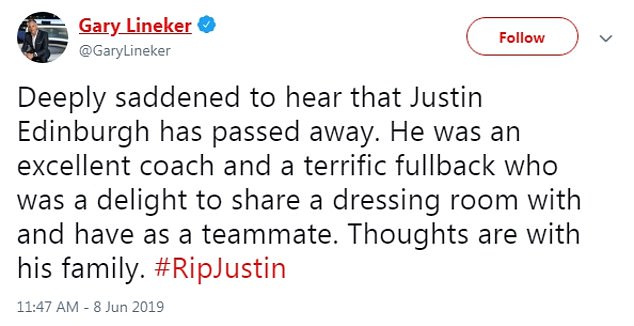 Tom Carroll, who played for both Edinburgh’s former clubs Tottenham and Leyton Orient, also expressed his grief at the manager’s shock passing.

‘Incredibly sad news. My thoughts are with his family, friends and everyone at the club,’ said Carroll.

Chair of the English Football League, Debbie Jevans, joined in the tributes: ‘Everyone associated with the EFL is shocked and saddened to hear of the passing of Justin Edinburgh.

‘Our thoughts are with his family and friends and all those associated with Leyton Orient Football Club at what is an incredibly sad time,’ she added.

Shortly after his return to the UK from Madrid Edinburgh suffered a cardiac arrest.

Before joining Spurs in 1990 Edinburgh started his career at Southend.

He joined Portsmouth on loan in 2000 before spending three years there.

Edinburgh leaves behind his wife Kerri, along with two children Charlie and Cydnie. 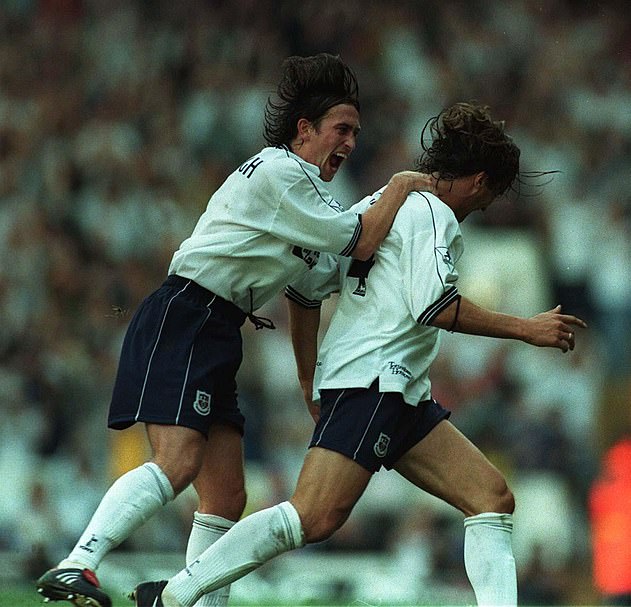