Experts had previously said the giant area, estimated to be about the size of Delaware, was locked into place, saying it ‘likely got stuck on the sea bed’

‘You can see at between 7-12 July 2018 the weather conditions and ocean currents conspire to swing the trillion tonnes of the giant iceberg A68 in an anticlockwise direction,’ he said.

‘My guess is that A68a will continue rotating as it is now around that western point, until what is currently the northern edge collides with the Larsen C ice front.

‘It has a spectacular amount of momentum and it’s not going to stopped easily. I should think we will see some interesting collisions with the ice shelf in the next few months.’

It is believed a ‘temperature anomaly’ on 20 July 2018, when it was almost 20 °C warmer than the mean over the Weddell Sea and Larsen Ice shelf, may have triggered the rotation beginning.

Glaciologist and former Project MIDAS collaborator Martin O’Leary told Earther a collision is ‘certainly possible’ he doubts it would have much of an effect on either the iceberg or shelf given the slow-motion speed at which it would occur.

Eventually, O’Leary says the prevailing ocean currents will push the iceberg northwards and eastwards into the Southern Ocean ‘where it will probably break up and melt.’ 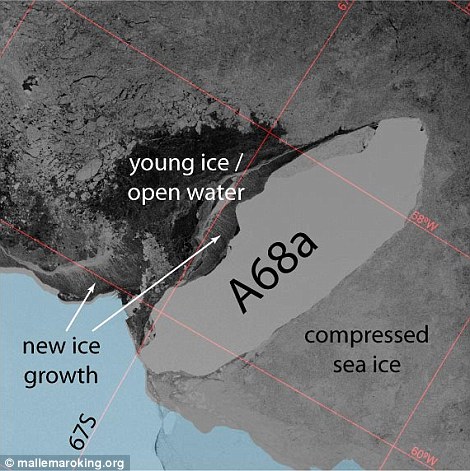 Left, a ‘temperature anomaly’ on  20 July 2018, when it was almost 20 °C warmer than the mean over the Weddell Sea and Larsen Ice shelf  Right: Sentinel-1 SAR satellite imagery from 29 August 2018 shows that to the north of the iceberg the wind is pushing the sea ice northwards faster than the iceberg is rotating. Iceberg A68 captured from with the Sentinel-1 SAR sensor 29 August 2018 23:58 UTC, showing an area of open water where there is intense sea ice generation happening right now.

last year it was revealed dense ice cover had so far prevented it from drifting far out to sea.

An animation showing its movement over the last few months reveals how the trillion-plus ton Iceberg A-68 has shifted as it’s battered by ocean currents, tides, and winds in the Weddell Sea.

While the huge chunk of ice, estimated to be about the size of Delaware, has moved around some, the experts say its surroundings have kept it somewhat locked into place.

An animation showing its movement over the last few months reveals how the trillion-plus ton Iceberg A-68 has shifted as it’s battered by ocean currents, tides, and winds in the Weddell Sea

Iceberg A-68 is the sixth largest iceberg on record since scientists began keeping track, and its separation from the ice shelf sparked fears about its future impacts on global sea levels.

Despite all the activity in the Weddell Sea, ‘its northern end has repeatedly been grounded in shallower water near Bawden Ice Rise,’ according to Project Midas researchers, who have been monitoring the iceberg over the last year.

‘These groundings led eventually to further pieces of the iceberg being shattered off in May 2018.

‘Whilst not quite large enough to be given labels themselves, the total area of icebergs lost from A-68 in May was the size of a small city.’ Scientists tracking a massive iceberg that broke free from Antarctica’s Larsen C Ice Shelf last year say dense sea-ice cover has so far prevented it from drifting far out to sea. It is shown above in July, 2018 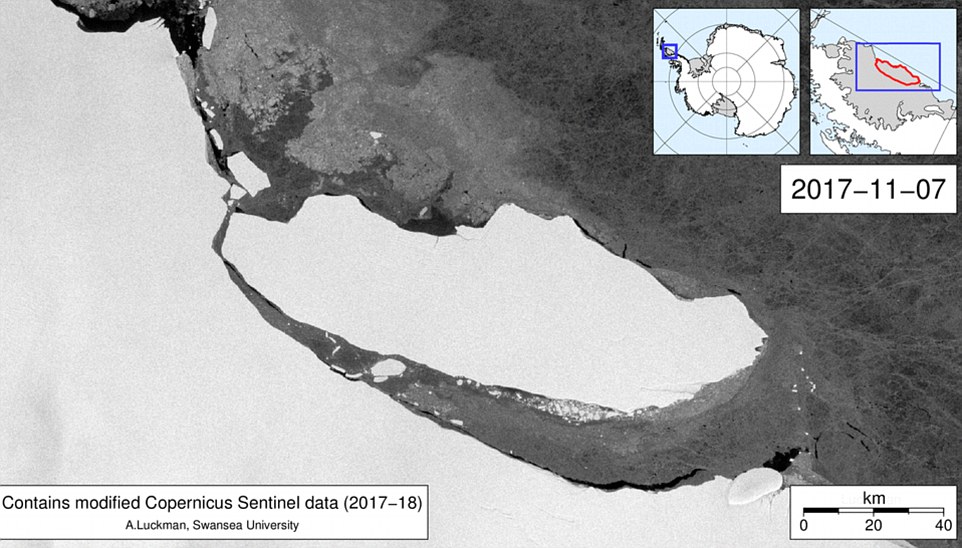 While the huge chunk of ice, estimated to be about the size of Delaware, has moved around some, the experts say its surroundings have kept it somewhat locked into place. Its position back in November, 2017 is shown

Earlier this year, scientists released the first-ever footage of ‘A-68’, a trillion-ton iceberg the size of Delaware that has broken off from Antarctica.

Stunning aerial clips capture the huge crack in Antarctica’s Larsen C ice shelf that led to the third largest iceberg ever recorded breaking off from the continent last July.

When A-68 separated from Larsen C, it revealed an ocean hidden under the ice shelf for 120,000 years, and a team of scientists are now studying the region to uncover some of the hidden ecosystem’s mysteries.

Led by the Cambridge-based British Antarctic Survey (BAS), the group will study tiny animals, microbes and plankton on the seafloor to see how they cope with severe changes to their environment.

As part of preliminary research for the trip, the team have taken aerial footage of the iceberg to monitor how far it has drifted to sea – the very first video captured of the berg since it calved from Larsen C last year.

Marine biologist Dr Katrin Linse, the BAS researcher leading the mission, said: ‘The calving of A-68 provides us with a unique opportunity study marine life as it responds to a dramatic environmental change.

‘It’s important we get there quickly before the undersea environment changes as sunlight enters the water and new species begin to colonise.

‘We’ve put together a team with a wide range of scientific skills so that we can collect as much information as possible in a short time. It’s very exciting.’

The scientists are travelling by ship to collect samples from the newly exposed seabed, which covers an area of around 2,250 square miles (5,800 square kilometres).

The team says their mission is urgent because the ecosystem that’s likely hidden beneath the ice for thousands of years may change as sunlight starts to alter the surface layers of the sea.

The team will investigate the area previously under the ice shelf by collecting seafloor animals, microbes, plankton, sediments and water samples using a range of equipment including video cameras and a special sledge pulled along the seafloor to collect tiny animals.

They will also record any marine mammals and birds that might have moved into the area. Their findings will provide a picture of what life under the ice shelf was like so changes to the ecosystem can be tracked.

The iceberg was formed by a single crack along Larsen C, its parent ice shelf, and makes up a little over 10 per cent of the shelf.

BAS researchers flew around the iceberg to get a better view of it as it drifts into the Weddell sea.

This newly exposed marine area is the first to benefit from an international agreement made in 2016 by the Commission for the Conservation of Antarctic Marine Living Resources (CCAMLR). 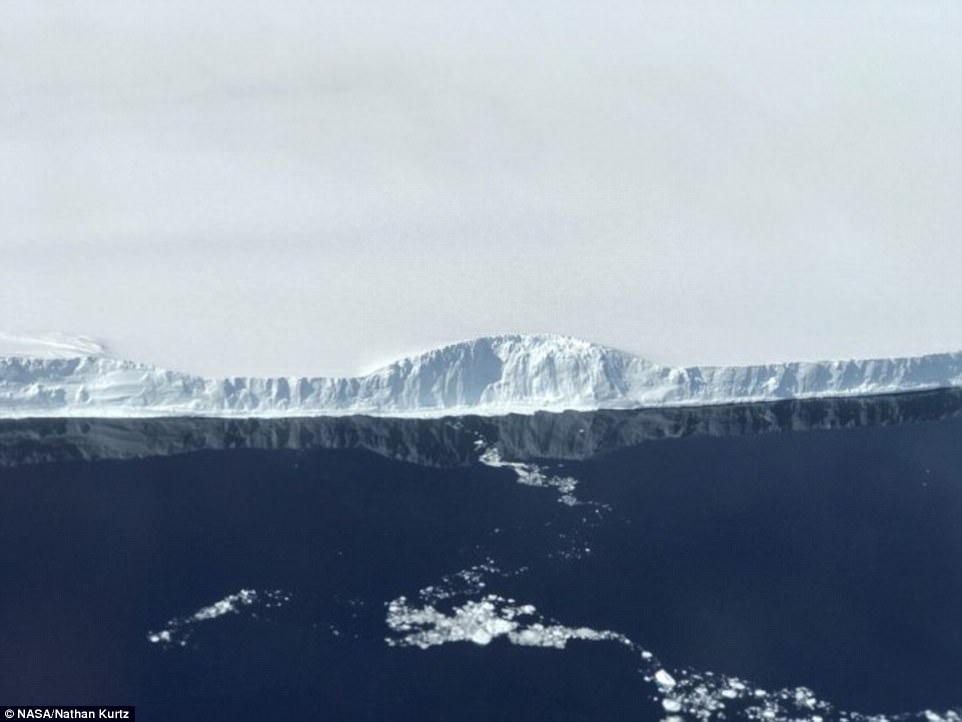 The edge of A-68, the iceberg the calved from the Larsen C ice shelf. Nasa took this image in November during a flight that was part of its IceBridge program, which will help researchers understand the bedrock under the ice

This agreement designates Special Areas for Scientific Study in newly exposed marine areas following the collapse or retreat of ice shelves across the Antarctic Peninsula region.

Professor David Vaughan, Science Director at BAS, said: ‘The calving of A-68 offers a new and unprecedented opportunity to establish an interdisciplinary scientific research programme in this climate sensitive region.

‘Now is the time to address fundamental questions about the sustainability of polar continental shelves under climate change.

‘We need to be bold on this one. Larsen C is a long way south and there’s lots of sea ice in the area, but this is important science, so we will try our best to get the team where they need to be.’