Parents have blasted an exclusive Sydney school for using $1million of school funds fighting a case over a paedophile teacher.

But the all-boys school, which charges students up to $34,770 a year, has denied responsibility for the abuse and has spent $1million in court arguing they can not have a fair trial because the case is more than 40 years old.

‘There has to be a limit to it, it can’t be a bottomless pit,’ the father of former pupils told the Daily Telegraph.

Trinity Grammar School, an all-boys school in Summer Hill, has come under fire from parents for spending $1million fighting against their duty of responsibility for a former paedophile teacher

‘They have plenty to spend it on at the school.’

The action against the school has been issued by four of the six victims, seeking damages for its role in enabling the abuse.

The school argued they were not liable as Futcher- who was dubbed Futcher the butcher by pupils – committed the acts on school camps and during other extra-curricular activities.

But the victims claim the school organised the camps and they were encouraged to attend as they were an integral aspect of the school’s culture.

Justice Stephen Rothman said there is undeniable evidence of Trinity placing Mr Futcher in a position of trust with students beyond classroom teaching, as a sports coach.

The Anglican school has been ordered by the Supreme court to pay the costs to the men, now aged in their 50s, which it has since appealed.

The school tried but failed to have its name suppressed in the criminal case which shocked the parents of students as there had been no mention of the legal costs in the school’s annual report.

Trinity was rocked by scandal in 2016 when a number of Year One pupils were found to be performing sex acts on one another. 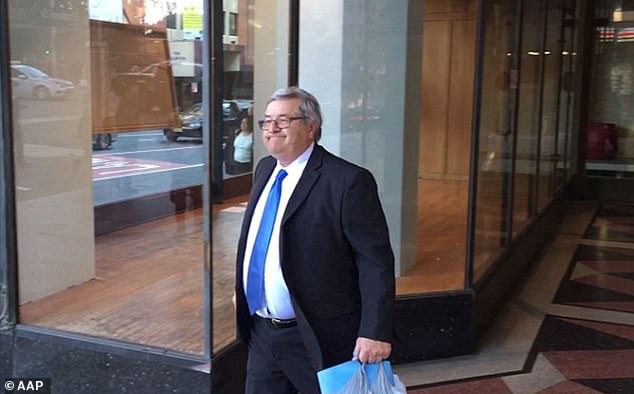 The school was slammed during the child abuse royal commission three years ago who found it would have done nothing to investigate the ‘Anaconda’ allegations had it not been probed by the school psychologist.

Rob Anderson, 56, one of Futcher’s victims, said the school had now become the abuser of the men.

‘They could have handled this in a compassionate way, this is the way they are treating the old boys,’ he said.

Futcher must serve a minimum of 11 years before he is released.