TripAdvisor says it removed ‘more than one million fake reviews’ last year as it hits back at criticism from Which? that its site is peppered with bogus recommendations

TripAdvisor claims it removed more than one million fake reviews last year as it fights back against warnings its site is peppered with bogus and misleading recommendations.

A recent study by the consumer group Which? found many reviews for apparently popular hotels from London to Paris and Las Vegas carried all the hallmarks of being invented to boost bookings.

A large proportion of the suspicious five-star ratings were from a single person who had never reviewed any other hotel before or since, according to an analysis of 250,000 reviews covering what were listed as the ten most popular hotels in ten locations.

TripAdvisor said some 66million reviews were submitted during 2018

The consumer group and the Competition and Markets Authority (CMA) have identified a wider problem of fake reviews on websites on everything from household appliances to handymen services and hotels.

This represents a serious issue for the public given that online reviews influence an estimated £23 billion of transactions a year in the UK alone and 97 per cent of people use them.

TripAdvisor, which has rejected the Which? findings, is today publishing evidence of how it tackles fakes and claims to have a combination of sophisticated computer vetting coupled with staff checks to guarantee the authenticity of reviews.

The company said some 66million reviews were submitted during 2018 and it insists that all were analysed using advanced fraud detection technology, and 2.7million were subject to additional human assessment by content moderators.

It said 4.7 per cent – 3.1million – were rejected or removed by either TripAdvisor’s advanced analysis technology or manually by the content moderation team. Some 2.1 per cent – around 1.4million – were identified as fraudulent and the company says 73 per cent of these were blocked before being posted. 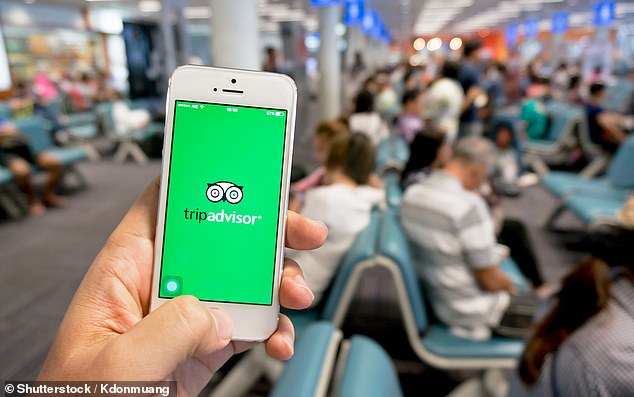 Hotels and restaurants which were identified as benefitting from fake reviews were hit with a ranking penalty, which means moving them down the popularity ranking league that appears when users perform a search. In some cases, a ‘red badge’ warning, where the hotel listing carries a warning logo for suspicious activity, is posted alongside the listing.

Which? has found evidence of ‘review factory’ companies operating on Facebook effectively selling positive social media feedback to all types of businesses, whether they are stores selling gadgets on Amazon to hotels and restaurants.

TripAdvisor has stopped the activity of more than 75 websites that were caught trying to sell reviews since 2015, including one individual who was sentenced to nine months in prison by the Criminal Court of Lecce in Italy last year. There are concerns that some unscrupulous people create fake profiles to rubbish competitors.

Senior Director of Trust & Safety at the company, Becky Foley, said: ‘Ensuring that TripAdvisor is a trusted platform for our users and listed businesses is a top priority. We’ve continued to make advancements to our industry-leading fraud detection efforts in recent years, but it’s a daily battle and we are far from complacent.’

Miss Foley said action is needed to ensure proper vetting of hotel reviews by other websites, including Google and Facebook.

‘As long as other review platforms aren’t taking aggressive action, then fraudsters will continue to exploit and extort small businesses for cash. It is time other platforms like Google and Facebook stepped up to the plate to join us in tackling this problem head-on,’ she said.

Adrian Cummings, of HotRec, the umbrella Association of Hotels, Restaurants, Pubs and Cafes in Europe, said: ‘Many hotels and restaurants rely on reviews to attract new customers, so it is crucial that review sites make every effort possible to ensure contributions are authentic.’

TripAdvisor claimed it is ‘winning the fight’ against fake reviews, however this is at odds with the findings of the Which? research.

Consumer rights expert at Which?, Adam French, said: ‘We recently uncovered widespread evidence of suspicious reviews on TripAdvisor and we believe the website should be doing more to tackle fake reviews and ensure users are not being misled – but it is far from the worst offender.

‘Many of the world’s biggest websites are failing to take sufficient action against a flood of fake reviews – potentially exposing consumers to poor quality or unsafe products and even fraud. With billions of pounds of UK consumer spending now influenced by online reviews, it is vital that the competition regulator takes strong action against firms failing to stamp out fake reviews.’