A triple-amputee veteran who started a GoFundMe page to raise money for a southern border wall has come under scrutiny for his history running right-wing Facebook pages that the social network purged during a sweep of ‘spam’ accounts.

Brian Kolfage, 37, was the target of an NBC News report on Thursday that called his background ‘questionable’ over the Facebook pages that often published hoaxes and conspiracy theories.

On the GoFundMe campaign, which has raised over $10.7 million, Kolfage doesn’t mention his past running the Facebook pages Right Wing News, VeteranAF and FreedomDaily, which were shut down by the company in an October purge of more than 500 political pages.

Kolfage has spoken openly of the ban in the past, accusing Facebook of censorship and saying he was never told what rules he had violated on the platform.

Iraq War veteran Brian Kolfage sits with his wife Ashley in a 2012 file photo. Kolfage insists that his GoFundMe campaign to build the wall is not a scam, but his background is under scrutiny 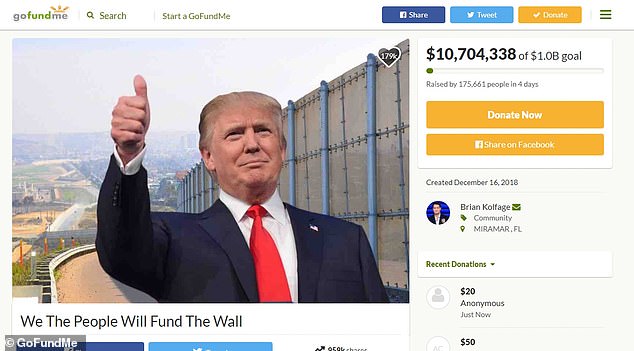 On the GoFundMe campaign, which has raised over $10.7 million, Kolfage doesn’t mention his past running Facebook pages that promoted conservative articles of dubious news value 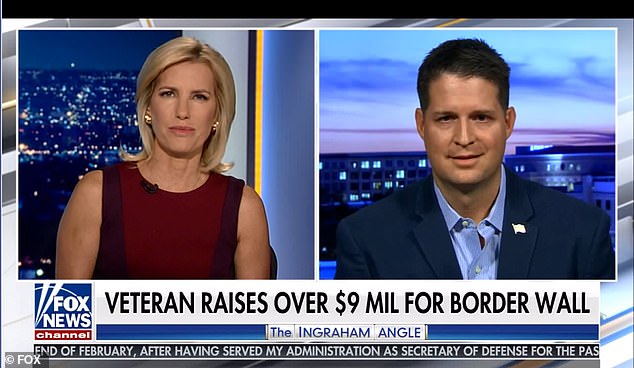 ‘I’m not allowed on Facebook anymore,’ Kolfage said in an appearance on The Ingraham Angle on Thursday night, briefly addressing the controversy.

‘They’ve threatened my wife to delete her account if they catch me on Facebook… It’s ridiculous the way these companies treat people.’

Some past headlines from FreedomDaily include:

The NBC report points out that the network of sites often ran the same article under different, pseudonymous bylines. For instance, several articles written by ‘Liberty Belle’ on FreedomDaily also appear on ‘VeteranAF’ under the byline ‘Lady Liberty.’ 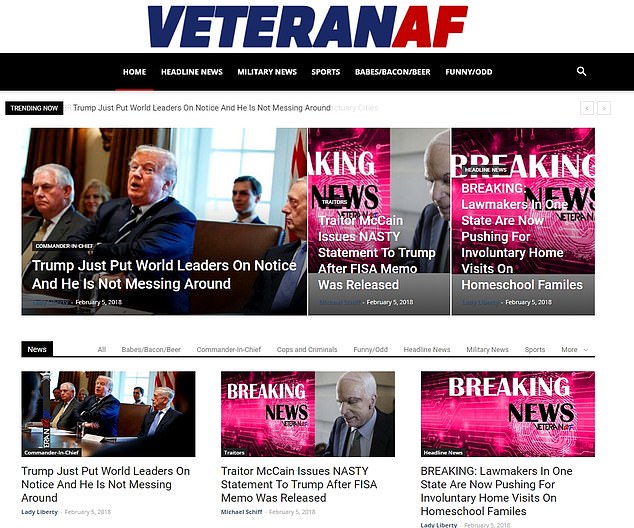 An archived version of Kolfage’s site VeteranAF is seen. It and other related sites Kolfage ran trafficked in highly sensationalized takes and dubious reports 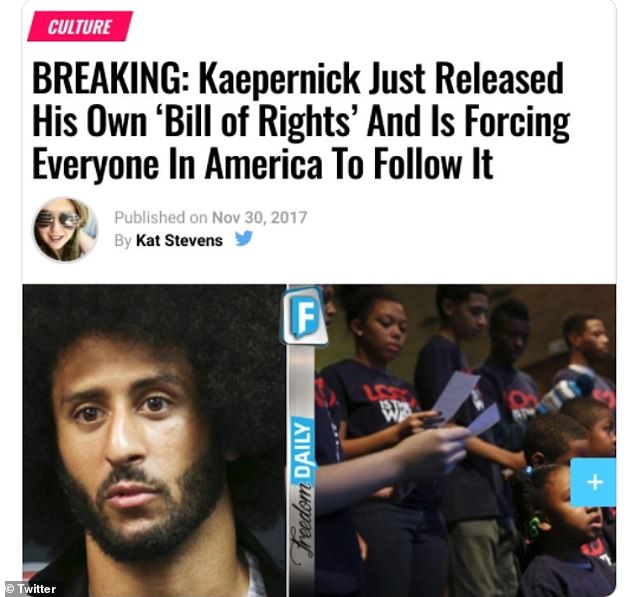 In October, the sites were all removed by Facebook in a purge of 559 pages and 251 accounts.

In a statement, Facebook said it had removed pages that ‘consistently broken our rules against spam and coordinated inauthentic behavior.’

Facebook accused the pages of ‘using fake accounts… to drive traffic to their websites’ or said they ‘were ad farms using Facebook to mislead people into thinking that they were forums for legitimate political debate.’

Kolfage blasted the move in an interview with the Guardian, saying he had tried in vain to set up meetings with Facebook to learn how he could adhere to the company’s evolving content policies.

‘I’ve talked with Facebook maybe 50 times in the last few months,’ he said. ‘Not once did they ever say we broke any rules or did something wrong. If they had an issue, they could have brought it up. We had a really close working relationship. That’s why this whole thing is a complete shock.’

After his pages were banned from Facebook, Kolfage set up a group called Fight4FreeSpeech, which accepts donations. 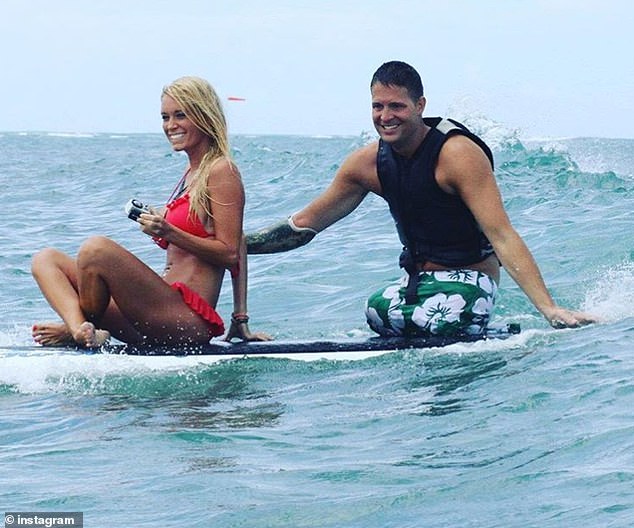 Kolfages said that he had been censored by Facebook and that the social media giant even threatened to retaliate against his wife, an aspiring model. They are seen in September

Kolfage told NBC that he hadn’t mentioned the prior failed Facebook ventures while raising funds for the wall because he ‘didn’t want it to be a distraction.’

‘I don’t wanna mix the two. That shouldn’t be the focus. My personal issues have nothing to do with building the wall,’ he said.

The fundraising campaign has received donations from over 175,000 people, with a whopping $50,000 donation coming in from an anonymous donor on Thursday.

On the GoFundMe page, Kolfage insists that the campaign is not a scam. ‘I’m credible and a real person,’ he writes.

Asked by NBC how he will ensure the funding goes toward the wall, he said: ‘We have someone who is tied in with the White House that’s in their inner-circle… We can work on a way where we can guarantee with a contract where [the funding] can only go to the wall.’ 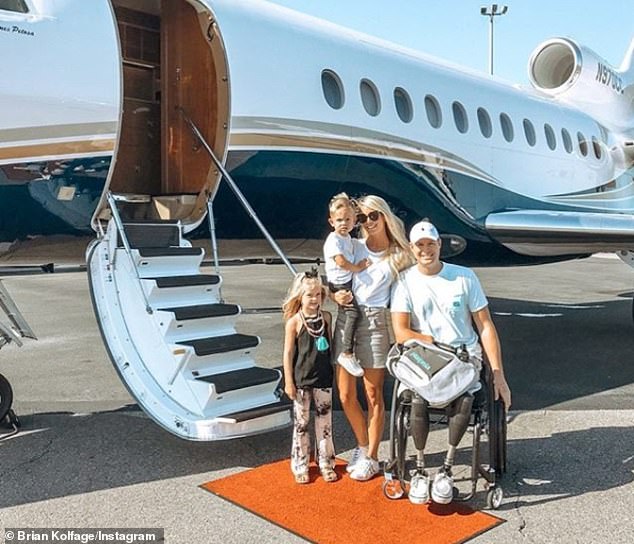 Kolfage insists that his GoFundMe campaign is not a scam, and that he has inside connections at the White House. He is seen with his family in October on a trip for wounded veterans

Trump announced Thursday he would not sign a bill to keep funding the government because it fails to provide billions for his border wall.

It was his second reversal in a matter of days after conservative allies and pundits accused him of backing down on a central campaign promise. His decision has thrown Congress into disarray and risks a federal shutdown this weekend.

Kolfage’s page inspired at least one opposing fundraising page. A GoFundMe fundraiser was created Wednesday to raise money for ‘ladders to get over Trump’s wall.’

The site posted a goal of $100 million and garnered more than $20,000 in donations as of Thursday afternoon. All the money will go toward a nonprofit that provides education and legal services to refugees and immigrant families.

Addressing criticism of the GoFundMe campaign, Kolfage said on Ingraham Angle: ‘That’s just the liberal tactics and the liberal media, they’re gonna come out and attack me, they’re going to attack my family.’

‘They can go ahead and do what they want but we’re not stopping and we’re going to keep on pushing through.’