Miracle triplet toddlers were born through IVF treatment despite their mom being told that a triplet pregnancy wouldn’t be possible unless one of them was terminated.

In 2003, business owner, Holly Bennett, 42, from Texas married her sweetheart, Jason, 47, but never considered having children; spending the following seven years making the most of their time together.

Love: Holly Bennett, 42, from Texas married her sweetheart, Jason, 47, in 2003. Pictured is the couple with their triplets 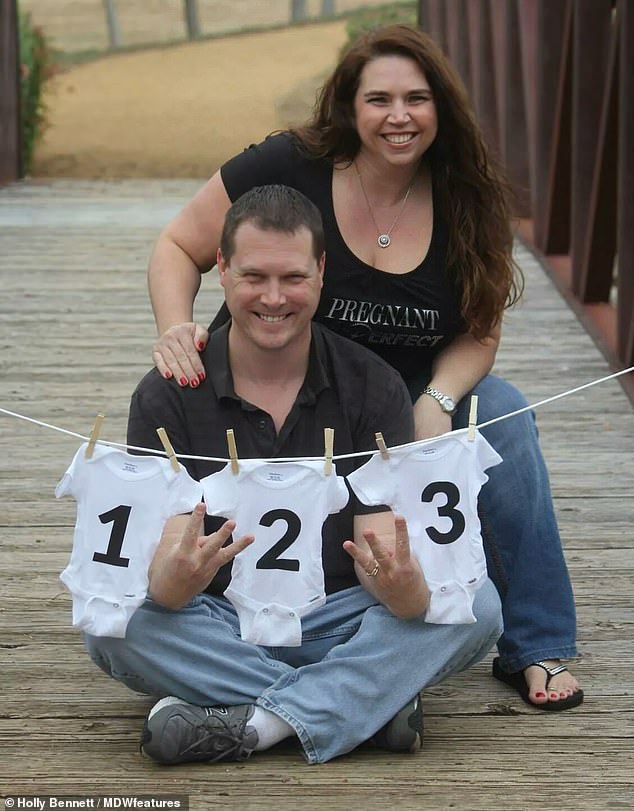 Struggle: The couple tried for 12 months to get pregnant naturally before discovering Holly had a birth defect 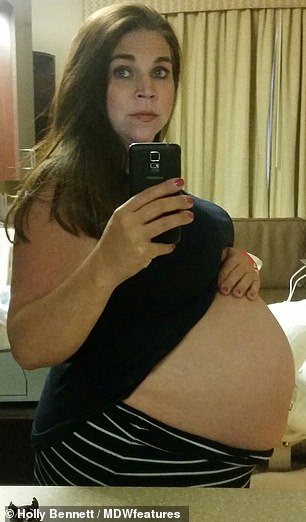 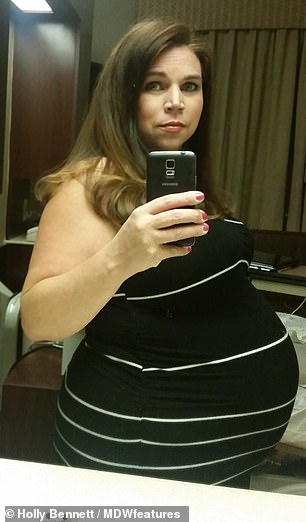 Growing bump: Holly, pictured pregnant with her children, consulted a specialist and got pregnant twice before losing both children 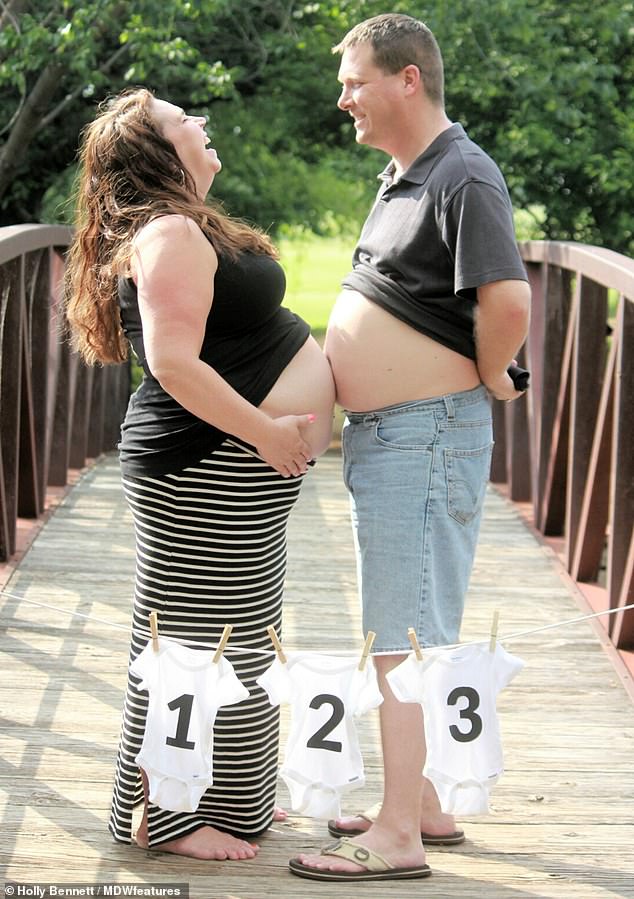 Terrifying: When she was pregnant with her triplets, doctors wanted Holly to terminate one child to increase chances of success

Due to the tube removal and her age, Holly and Jason were referred to a reproductive endocrinologist and despite her doctor telling her it was highly unlikely for her to become pregnant that month due to the position of the eggs being on the ‘wrong side’, she fell pregnant with a boy in February 2012.

The pregnancy went well in the beginning until the day before she was due to give birth, Holly was admitted to hospital and was induced that evening after showing signs of pre-eclampsia, which means high blood pressure in pregnancy.

The next morning Holly went into labour, but due to several errors, her boy became distressed and passed away on October 26, 2011.

‘I was absolutely gutted. I recall crying so loudly that I was sure the windows vibrated, and the neighbours could hear,’ Holly said.

‘It was a very painful time. When I woke up from the emergency C-section, Jason gave me the news. I was confused and devastated.

‘I didn’t realise something like that could happen in the hospital during a normal delivery. I now know so many things I wish I had never learned.

‘We buried our son two-weeks later. I never held him – not even once. I couldn’t go back to the grave site until our infertility journey was over.’

Following months of trying to heal from the grief, Holly and Jason decided to try again and went to their fertility doctor. Through injections and several cycles later, she fell pregnant with a baby girl in January 2013. 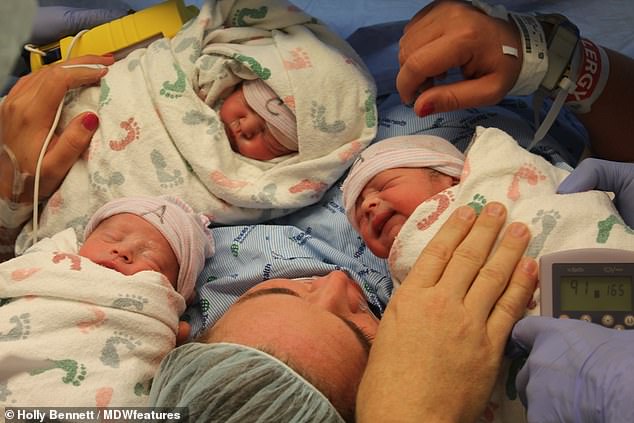 Miracle: But the family refused and Holly was able to successfully deliver all three babies 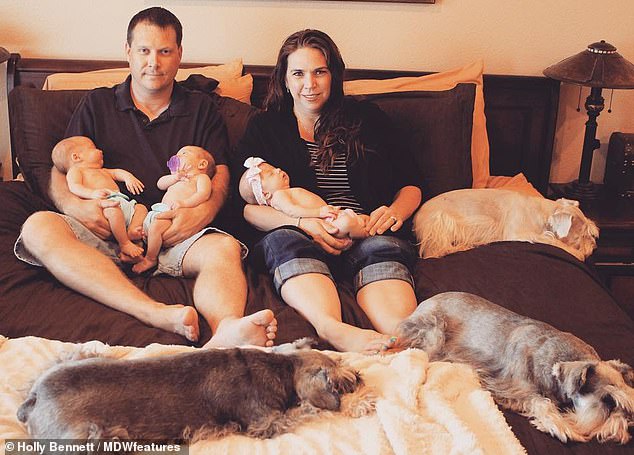 Family: The couple was overjoyed with having their triplets after the years of trying to get pregnant 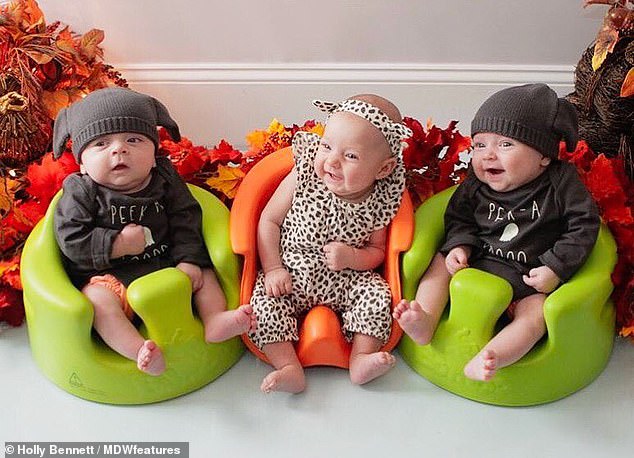 Happy: The triplets are named Wyatt, Savannah and Beau 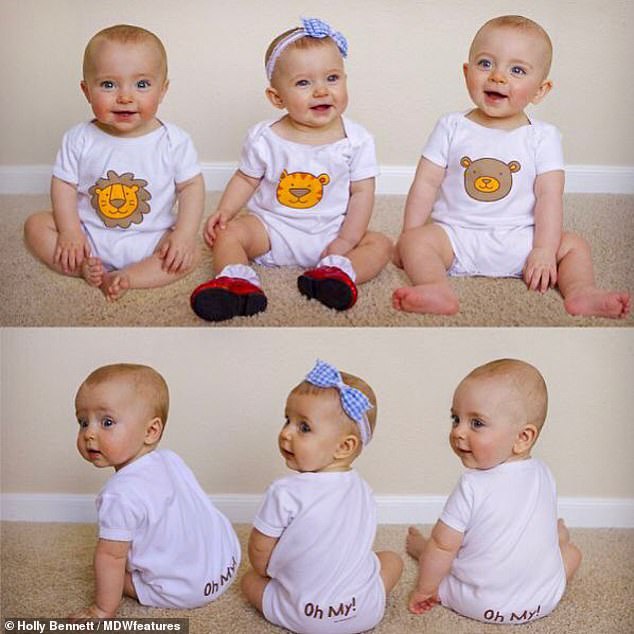 Last chance: Holly got pregnant with the triplets at 38 years old and was told it would be her final attempt

Along with their grief from the loss of their baby boy, they tried to stay positive. However, four months into her pregnancy on May 24, 2013, Holly lost her baby girl due to chromosomal abnormalities.

‘After allowing my body to heal we were able to start back seeing the fertility doctor. I chose injections this time, as the clomid had caused me to double over in pain,’ she said.

‘The injections were scary, but over time they became part of normal life. Several cycles later I became pregnant with a baby girl.

‘I was over the moon. My mind tried to make everything OK and I convinced myself that I would not have been pregnant with her if I had not lost my son, as I would have likely been breastfeeding and certainly not thinking about becoming pregnant again. But I was only four-months pregnant when I lost our daughter.’

A few months later, they began fertility treatments for the third time, but this time, Holly did not become pregnant. Following months with no explanation or reason for her inability to conceive, they decided to try through In Vitro Fertilization (IVF) and by that time, Holly was 38 years old.

According to her doctor, the odds of a pregnancy via IVF were about 50/50, so, desperate to have children, they fertilized enough eggs to try twice. Half of her zygote cells were thawed and by the third day, only three multi-cell embryos remained. They decided to use all three and despite the low odds of having multiple births, Holly became pregnant with triplets. 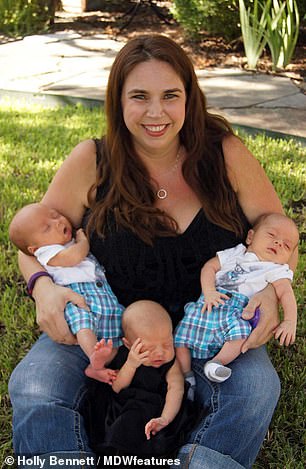 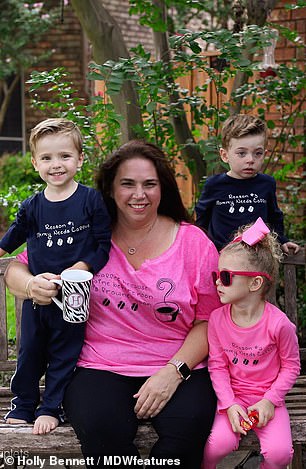 Overjoyed: ‘Raising triplets isn’t easy, but it is so rewarding,’ Holly said 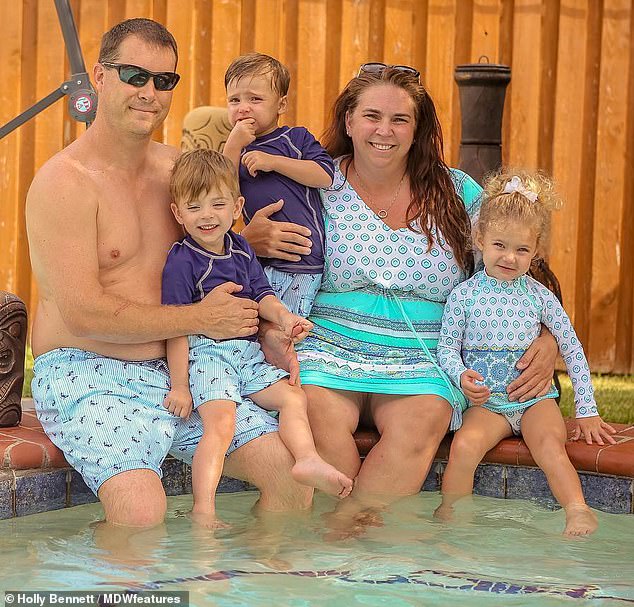 Fun: The family had to overcome difficult decisions about the triplets, but they are happy with how everything turned out 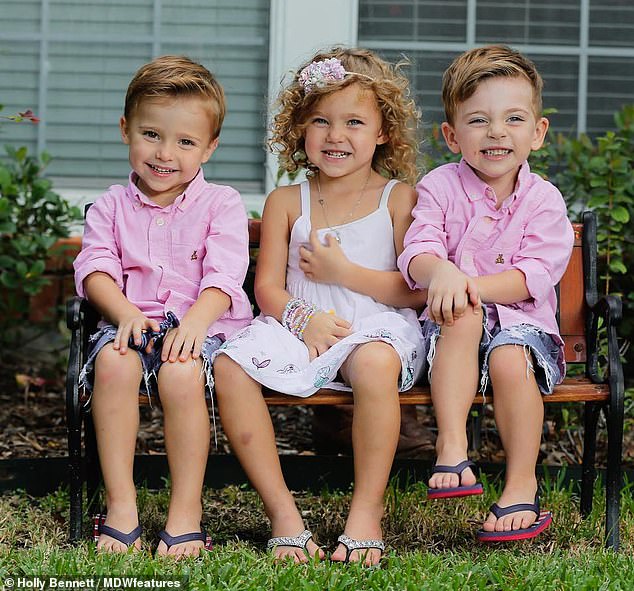 Adorable: The triplets are now three years old, and Holly calls them her ‘miracle babies’

Despite being told by doctors that they would need to terminate one of her triplets, she gave birth to all three triplets on June 9, 2015. Beau, Wyatt and Savannah, three, were born only a minute apart.

‘Honestly I laughed a bit uncontrollably – it was disbelief and shock. Jason was so happy. I was nervous. He had no clue how risky the pregnancy was, but it was all I could think about,’ Holly said.

‘I had learned to expect the worst – as you can see I was conditioned to understand grief and loss. I understood the risks of a triplet pregnancy and knew that a positive outcome was not likely.

‘Early in the pregnancy at a routine sonogram, my baby son, Beau, had an omphalocele. Basically, his organs were growing outside of his body.

‘We were referred to a specialist in Houston for CVS testing to confirm the reason for this defect. It was highly probable that he had some chromosomal issues.

‘Carrying a triplet pregnancy puts all three babies at risk of pre-term delivery, so we had some tough decisions to make; risk losing everything or terminate baby B.

‘I had a mixture of emotions, I mean I already expected the worst; so, on one hand it was my fears confirmed. I was also nervous – if we did terminate what if I lost the whole pregnancy?

‘The doctors sat us down in a room and illustrated all of the potentially bad outcomes if I continued the pregnancy. They wanted to terminate Beau that day, but we insisted on the testing.

‘Two rounds of testing came back with no chromosomal issues. As the pregnancy progressed, the omphalocele slowly disappeared, and as you can see from Instagram, Beau was born completely healthy and I must add – adorable.’ 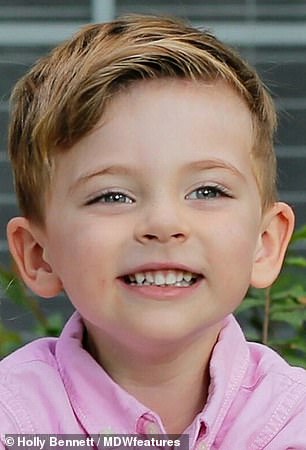 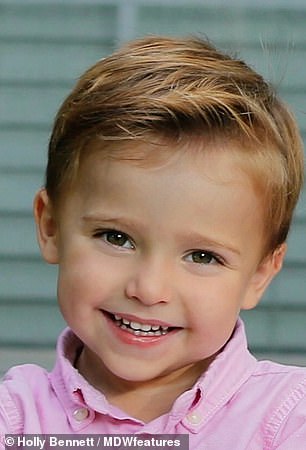 Cute: The triplets were born with the help of Vitro Fertilization (IVF) 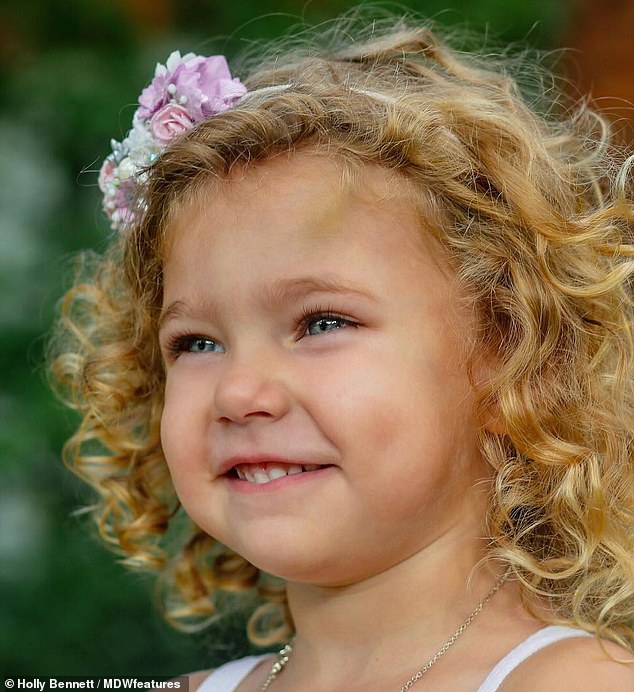 Moving on: Holly admitted nothing was enjoyable about the IVF process, but the outcome was three adorable children. Pictured is her daughter, Savannah 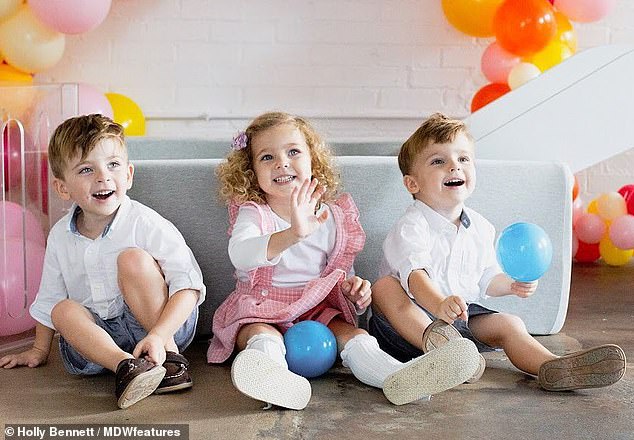 Sweet smiles: The one regret Holly has is not documenting her pregnancy struggles to help other people going through similar issues 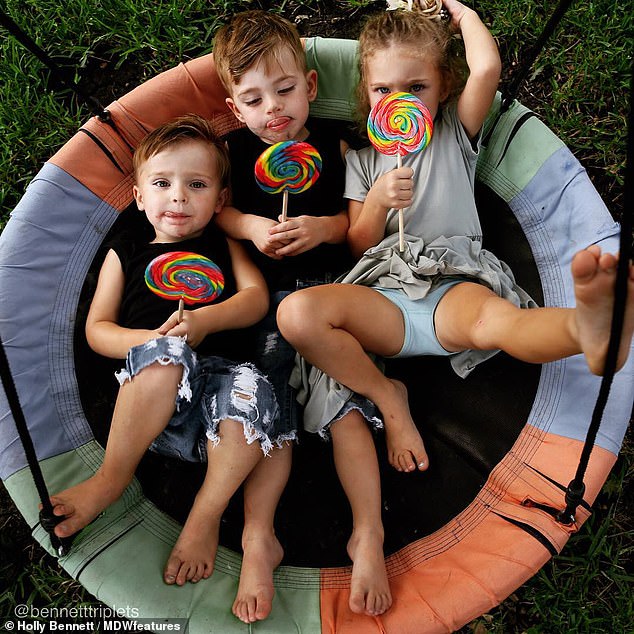 Sweet tooth: The journey has been very private for the family but now they are willing to share their story 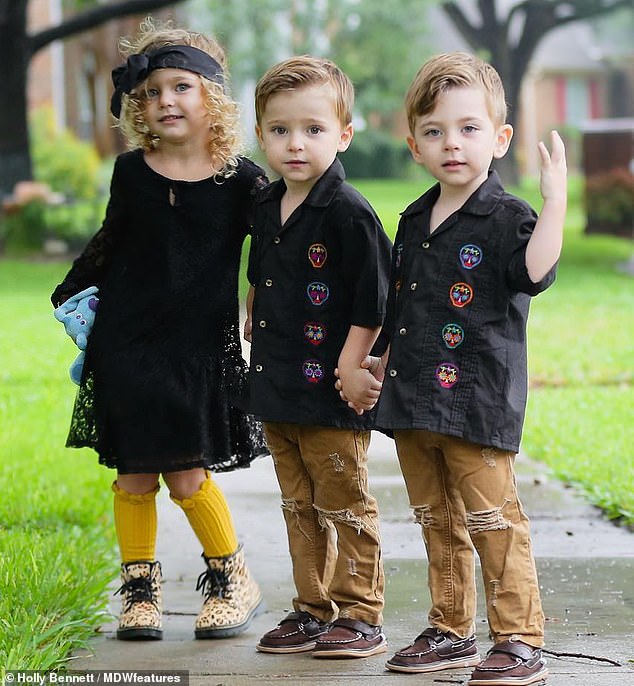 Picture perfect: ‘I think it has been so amazing to be part of a unit like they are since the day they were born,’ Holly said

She  continued: ‘That is one of the things I am so proud of and amazed by. I feel there is something so very special; just something extra with Beau to make sure that we never forget what happened.

‘My local obstetrician never doubted we would have a successful pregnancy – and never once encouraged reduction.

‘He knew what we had been through and I am forever grateful for his faith in me, in the pregnancy and for the care he gave me.

‘I am extremely proud. Raising triplets isn’t easy, but it is so rewarding. I think it has been so amazing to be part of a unit like they are since the day they were born.

‘I hear that I am super woman and a role model for some, which is flattering. Everyone tells us we are so incredibly blessed to have three healthy miracle babies.

‘I remember an embryologist telling me to enjoy the process – I thought she was so stupid; there was nothing enjoyable about the IVF process – but hindsight is twenty-twenty.

‘I wish I had documented more of what I went through to make it all happen. I would also suggest talking to others who have also gone through IVF. I was extremely private about our journey.

‘I would also recommend doing frozen transfer. Don’t be in a hurry to get pregnant at the risk of losing your best chance.’