Trojan is a fund whose aim is to generate a long-term investment return in excess of inflation.

With inflation as measured by the Retail Prices Index currently ticking along at 14 per cent, it’s a benchmark that is becoming a stiffer hurdle to conquer by the day.

Over the past five years, the £6.5billion fund has delivered a return to investors of 22 per cent.

Over the same period, the Retail Prices Index has jumped by 29.9 per cent. Over the past ten years, the fund has outperformed – obtaining a return of 49 per cent compared with a 45.9 per cent increase in retail prices.

Sebastian Lyon, manager of the fund, remains sanguine, insisting that the multi-asset investment is very much a ‘sleep at night’ vehicle for investors – a fund that will never shoot out the proverbial performance lights, but equally will not suffer big losses when stock markets fall.

The statistics speak for themselves. Since the fund’s launch in May 2001, it has delivered positive returns in 19 out of 22 calendar years, the exceptions being 2013, 2018 and the current year to date.

The fund’s steadiness is a result of its ability to diversify the assets it holds. Currently, 24 per cent of its holdings are equities. Its biggest position is in US Treasury Inflation-Protected Securities – and it also has a 12 per cent exposure to gold.

Lyon says its equity holdings are at the lowest for at least 15 years. He says: ‘We started last year with half of the portfolio in equities. We reduced it to the mid-30s as the year progressed and then down to 25 per cent in the summer.’

The manager believes that recession will be the dominating economic issue in 2023 – and he says it is inevitable as the Government and Bank of England strive to conquer inflation.

Lyon’s fear is that interest rates will have to rise ‘higher for longer’ – triggering recession and an increase in unemployment – in order to drive wage inflation down. 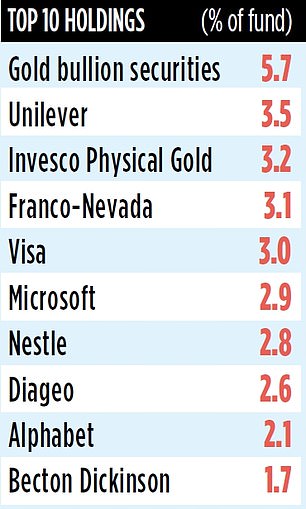 Such a challenging economic backdrop means the fund’s equity holdings have a common characteristic: resilience of earnings. Key stakes are in defensive stocks such as drinks manufacturer Diageo, consumer products giant Unilever and Swiss food company Nestlé. Alongside these are stakes in US tech companies Microsoft and Alphabet. Although Lyon has reduced these positions, he still believes they remain excellent businesses. ‘Their share prices will come back,’ he says.

‘Microsoft has got fingers in lots of pies as evidenced by its stake in financial information company London Stock Exchange Group – and it has a strong balance sheet.’ The main driver of investment return for the fund this year has been gold. Although the gold price in dollar terms has gone nowhere in the past year, it has risen in sterling terms by more than 7 per cent.

‘For a long time crypto-assets such as Bitcoin took the oxygen out of gold,’ says Lyon. ‘But as we’ve found out in recent months, crypto-assets are like investing in US stocks listed on the Nasdaq that are on crack. I am sure gold will do its job again next year as a defensive asset.’

Trojan has ongoing annual charges that total just over one per cent. It does not pay a dividend, so is not suitable for income investors.

The fund is part of a stable of collective investments run by Troy Asset Management.

The group’s investment philosophy is built around preserving and growing investors’ capital over the long term.