New York Rep. Alexandria Ocasio-Cortez is facing criticism after she unveiled her new Green New Deal posters, the design of which have been compared to Soviet-era propaganda images.

‘Surprise! I am thrilled to announce the launch of our #GreenNewDeal art series with custom Bronx & Queens GND posters,’ Ocasio-Cortez said in a series of tweets to her 5.27million followers Friday.

‘These posters push us to imagine our future with a Green New Deal in two of our beloved NY-14 parks: Pelham Bay & Flushing Meadows,’ she added, noting that the posters were ‘made in the US’ and ‘union-printed.’ 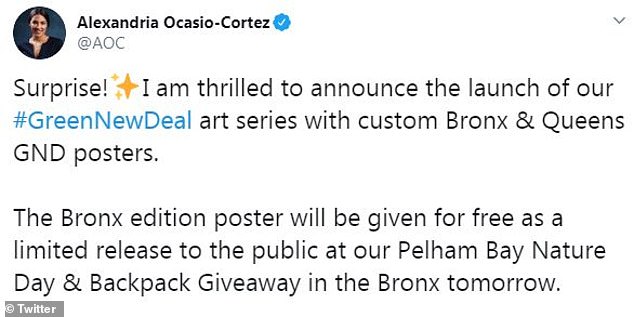 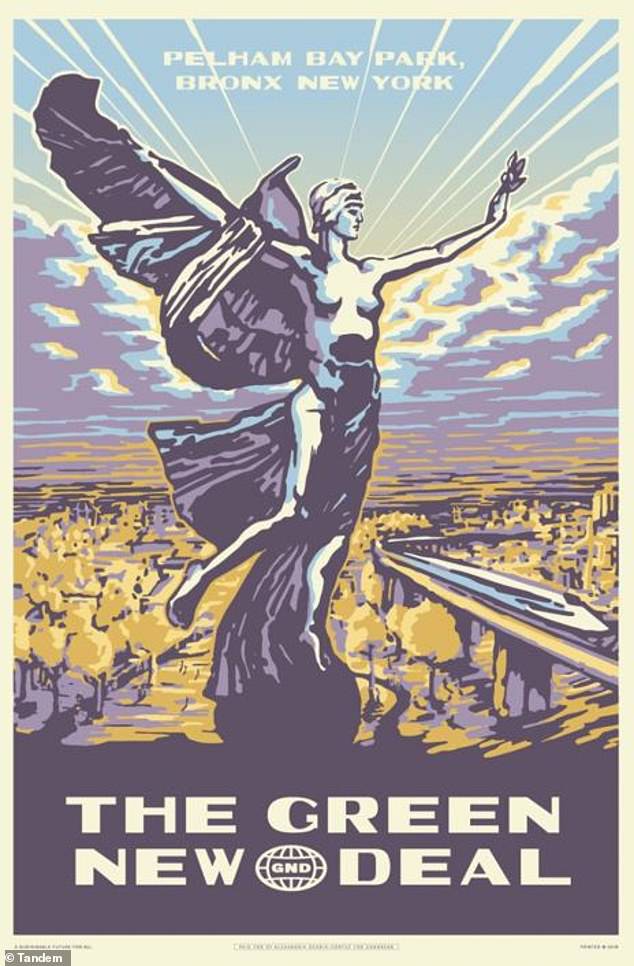 One of the two Green New Deal posters. This one features the Bronx Victory Memorial statue in Bronx’s Pelham Bay Park 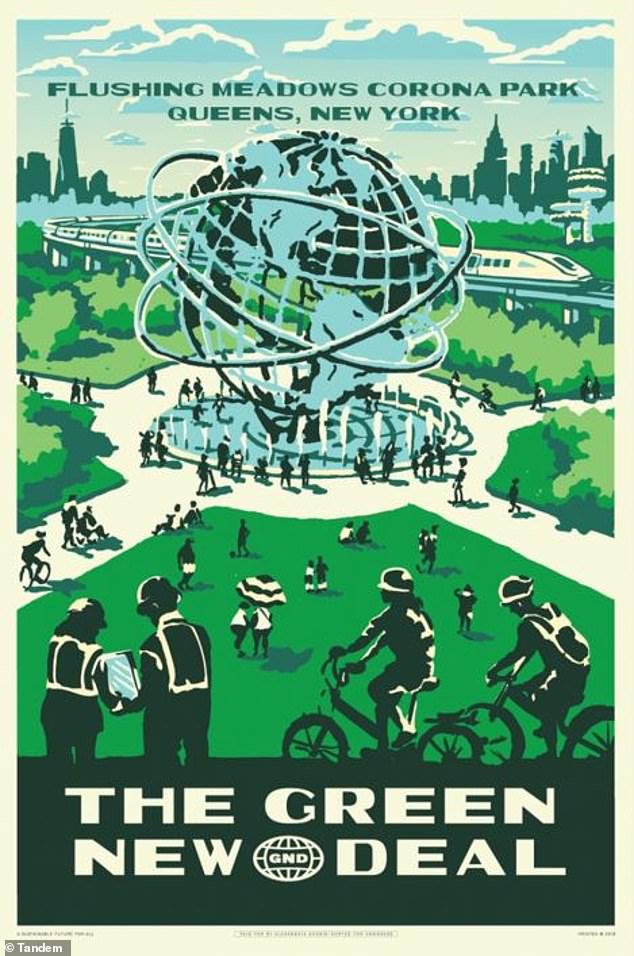 One poster features a stylized rendering of the Bronx Victory Memorial statue that sits atop a column in the Bronx’s Pelham Bay Park, while the other shows the iconic globe and observatory towers created for the 1964 New York World’s Fair, located in Queen’s Flushing Meadows.

Both use an industrial-style typography with a distinct 1930s flair.

Ocasio-Cortez’s spokesperson told City Lab that the posters were designed by New York’s Tandem, the same design studio that worked on her election campaign art.

Ocasio-Cortez’s detractors were quick to pounce on the poster artwork, comparing it to Soviet Union-style propaganda imagery. 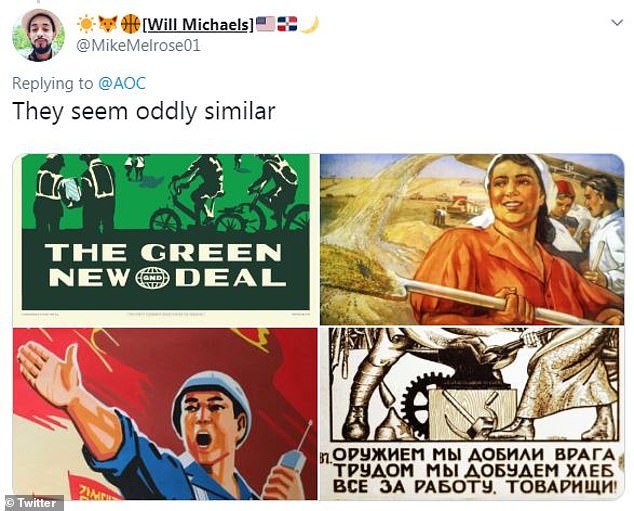 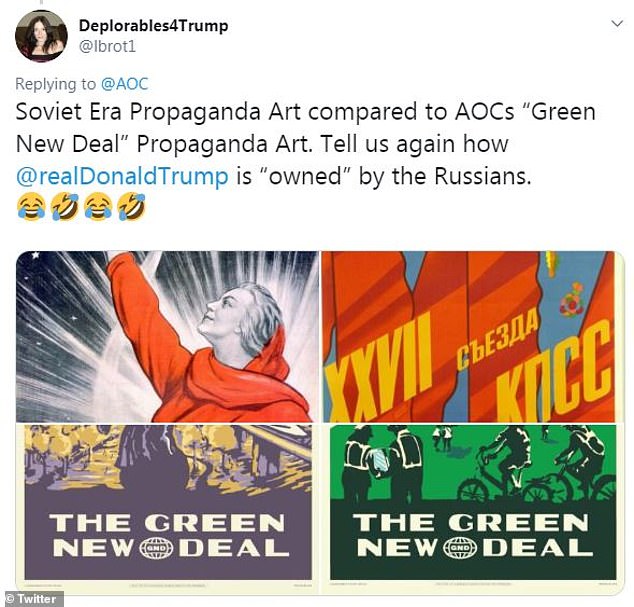 Twitter trolls compared Ocasio-Cortez’s posters to Soviet Union-era propaganda art, examples of which they included in their tweets 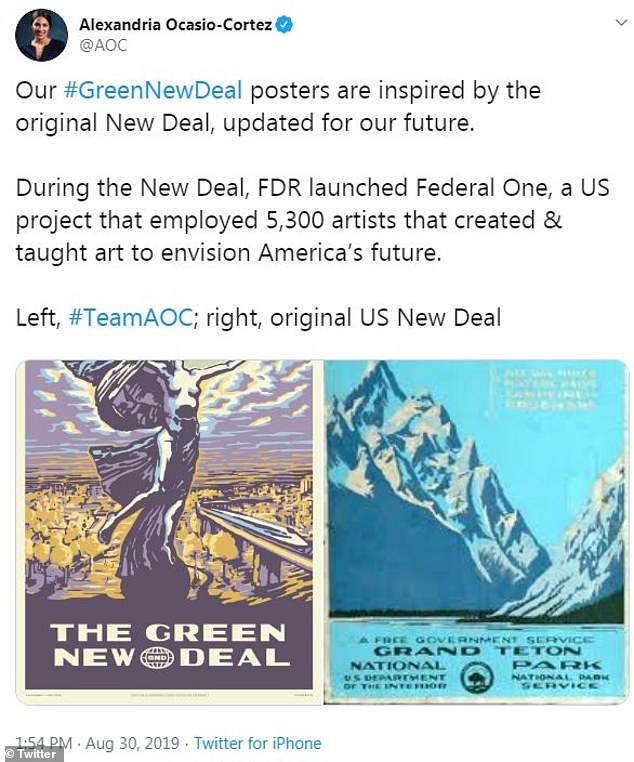 ‘Reminds me of the Soviet propaganda posters. Lenin and Stalin also had “brilliant ideas”,’ one Twitter user wrote, posting a Soviet-era poster of a saluting woman in a peasant blouse.

‘She does know this look looks like Soviet Union propaganda right? How spooky…’ a Twitter user wrote.

It’s unclear if Twitter troll accusations were what prompted Ocasio-Cortez to clarify the inspiration behind her Green New Deal poster artwork, but that’s exactly what she did about 40 minutes after she posted the initial tweet unveiling the images.

‘Our #GreenNewDeal posters are inspired by the original New Deal, updated for our future,’ Ocasio-Cortez tweeted Friday, along with a brief history lesson — ‘During the New Deal, FDR launched Federal One, a US project that employed 5,300 artists that created & taught art to envision America’s future.’ 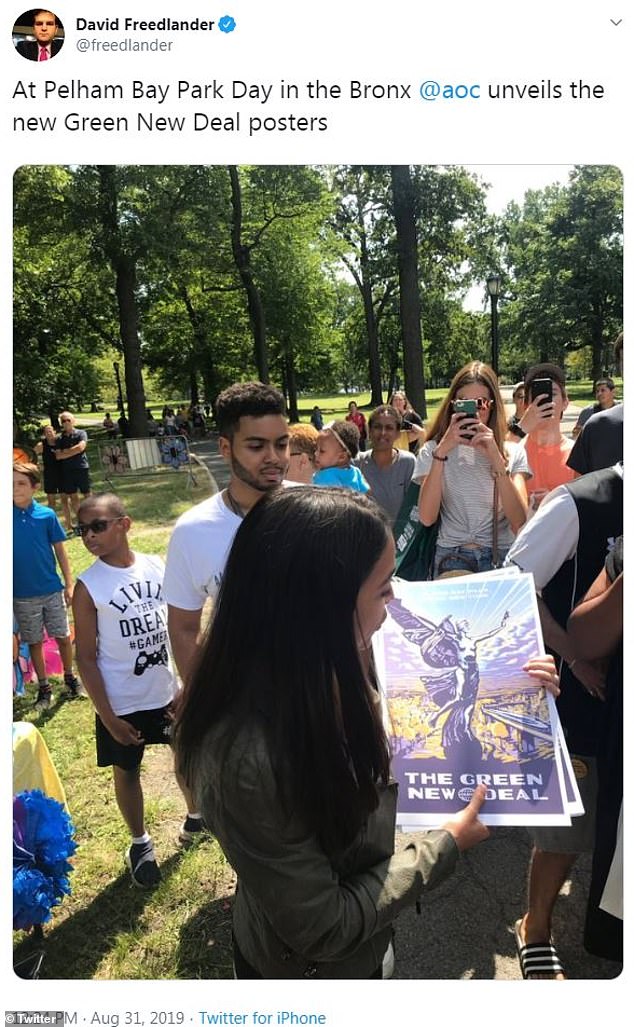 Ocasio-Cortez was spotted in The Bronx Saturday, revealing the posters to event attendees

She then added a Franklin D. Roosevelt-era New Deal,  poster advertising an event at the Grand Teton National Park, which features a similar colorway, art style and lettering as that seen in her own posters.

Federal Project Number One was the name of a series of Works Progress Administration projects which employed artists, musicians, actors and writers and was said to have created more than 100,000 pieces of public art, including 35,000 poster designs.

Ocasio-Cortez tweeted that ‘we aspire to release custom #GreenNewDeal art for local communities across America’ and are developing a line of reusable products that dovetail with the policy’s sentiment.

Republicans have been critical of the initiative, calling it unrealistic, while the Trump administration has eagerly been focusing on increasing the production of oil, gas and coal on federal and private land, while dismissing climate change concerns.