Gladys Berejiklian has been slammed by trolls for not abiding by Covid-safety measures after sharing a photo of her nestled against State of Origin coach Brad Fittler – despite the fact it was taken more than a month ago.

The New South Wales premier took to Twitter on Sunday to cheer on the Blues as they battle it out against the Maroons in the series finisher.

The match is being played in Brisbane’s Lang Park under strict conditions, as several states grapple with local Covid outbreaks, which has seen Greater Sydney plunged into a two-week lockdown.

‘Go Freddy and the NSW Blues! Let’s wrap the series up tonight!’ she wrote, alongside the snap, which shows her wrapped under the footy legend’s arm.

But a sea of online trolls were quick to try and ruin the moment of fun, criticising the NSW premier for not socially distancing or wearing a mask.

The picture was actually taken back on June 7 before the team left for the first match – weeks before the Bondi cluster began and back when NSW had zero cases.

She posted the same picture to Twitter back then to cheer on her team.

NSW is currently living under strict Covid restrictions, with masks mandatory and Greater Sydney and surrounding areas under a stay-at-home order.

‘No masks. No social distancing… Do as I say, not as I do. Well done Gladys!’ one person commented.

Another added: ‘How is that social distancing [and] mask wearing going Gladys?’

But others jumped to the premier’s defence, pointing out the photo was taken at the series opener in Townsville on June 7 – before NSW’s latest coronavirus outbreak.

‘This photo is almost a month old y’all,’ one person explained, while another wrote ‘old photo’.

Ms Berejiklian has resisted lockdowns throughout the pandemic while other state leaders have promptly shutdown amid a handful of cases.

On Sunday, the premier defended her decision to delay harsher restrictions, saying she has no regrets about her government’s unsuccessful bid to keep Greater Sydney out of lockdown as it battles the highly-infectious Indian Delta virus strain.

NSW recorded 30 new locally-acquired virus cases in the 24 hours to 8pm on Saturday, with Greater Sydney, Central Coast, Blue Mountains, Wollongong and Shellharbour enduring the first of 14 days in lockdown. 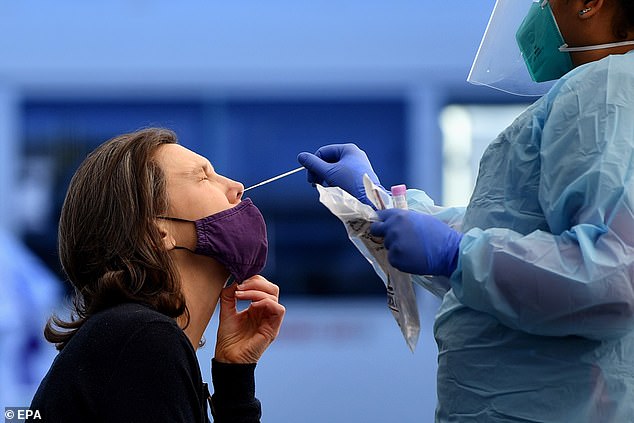 Anyone in regional NSW who has been to Greater Sydney since June 21 is also being asked to stay home for the lockdown period (pictured, testing in Rushcutters Bay on Sunday)

All have been linked to the Bondi outbreak, but only 11 of them were self-isolating throughout their infectious period.

NSW had not recorded 30 new locally-acquired cases of Covid-19 since December, amid the Northern Beaches outbreak.

The new infections bring the Bondi outbreak to date to 112 people.

One case linked to the seafood distributor is a domestic flight crew attendant with Virgin Australia who tested positive on Saturday night.

Ms Berejiklian said on Sunday she expected local case numbers to increase in the coming days, given the contagiousness of the Indian Delta variant. 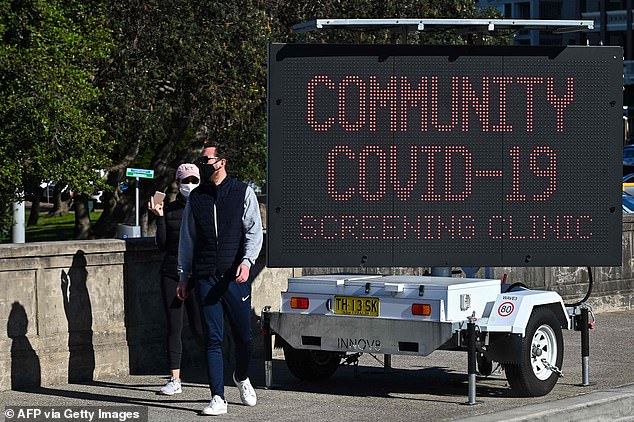 When asked if she delayed calling a citywide lockdown because she wanted to keep her reputation as a premier who keeps the state open, Ms Berejiklian replied: ‘I do not regret a single decision we have taken.

‘I have never cared about what people think about me. I care about keeping people safe.’

WHAT DO YOU THINK OF THE PIC?

Greater Sydney was placed into lockdown on Saturday after escalating restrictions were enacted over several days across the city’s centre and east.

Residents in the lockdown zone are only allowed to leave home for work that can’t be done at home, to shop for essentials, for exercise, to seek medical care or for care-giving or compassionate reasons.

Anyone in regional NSW who has been to Greater Sydney since June 21 is also being asked to stay home for the lockdown period.

Dr Chant said she was confident the lockdown – scheduled to end at 11.59pm on July 9 – would be sufficient to bring the outbreak under control.

NSW Police issued more than 15 fines for offences on the first night of lockdown. 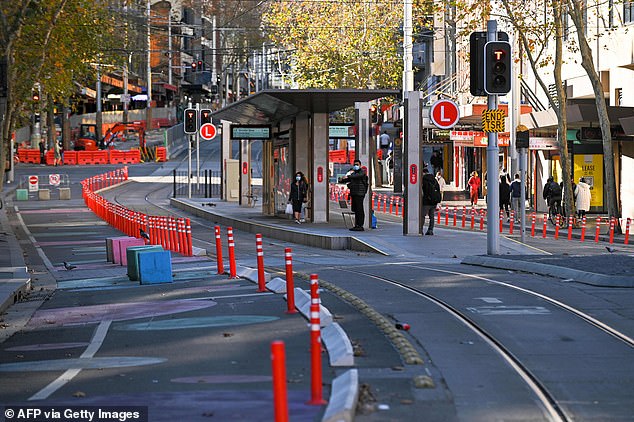 NSW had not recorded 30 new locally-acquired cases of Covid-19 since December, amid the Northern Beaches outbreak (pictured, locked down Sydney on Sunday)

They included an eastern Sydney family travelling to the Hunter for a sporting event and an Illawarra cafe owner who refused to wear a mask.

The Northern Territory on Sunday reported five new diagnoses, with the government imposing a 48-hour lockdown for the capital city and some surrounding areas, which followed a positive case of a local miner.

‘We’ve done this before, we know how to do it. And we will get through it.’

Health authorities are continuing to track hundreds of passengers from five Virgin flights on Friday and Saturday which carried people between Brisbane, Melbourne, Sydney and the Gold Coast.

The alert was raised after a Sydney-based flight attendant tested positive to COVID, and was possibly infectious on Friday and Saturday. 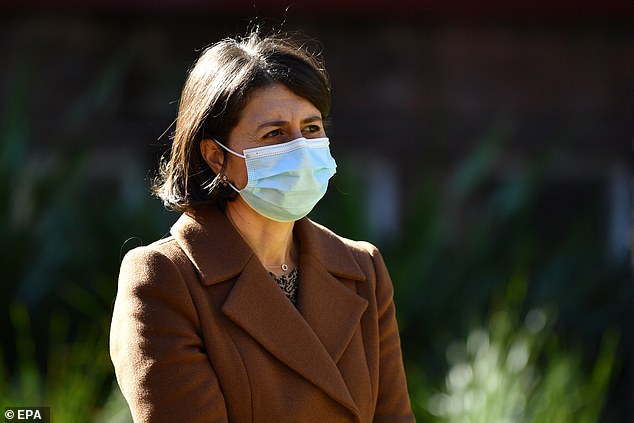 When asked if she delayed calling a citywide lockdown because she wanted to keep her reputation as a premier who keeps the state open, Ms Berejiklian (pictured on Sunday) replied: ‘I do not regret a single decision we have taken’

NSW Chief Health Officer Kerry Chant said the crew member did not have any symptoms when working those shifts and was unaware of having been a close contact of a worker at Sydney’s Marrickville Great Ocean Foods.

The NT situation was sparked by the positive case of a mine worker at the Newmont-owned Granites gold mine in the Tanami desert, some 540km northwest of Alice Springs.

More than 1,600 people in three states have been ordered into isolation after he tested positive.

Chief Minister Michael Gunner said the worker was on a flight to Darwin with 80 other people. There are more than 200 other workers who flew from the mine to Darwin and authorities are still to contact about 20 of them.

Queensland has reported two new local cases, with both people believed to have been active in Brisbane for several days.

Canberra will make face masks mandatory indoors from Monday, given the regularity of travel between the ACT and affected parts of NSW.

Amid fears the contagious Indian Delta COVID variant could spread from Greater Sydney, New Zealand has paused a quarantine-free trans-Tasman bubble until at least Tuesday.

‘We understand and respect that and regard that is reasonable under the circumstances,’ Mr Hunt said.

Most Australian states and territories have imposed travel restrictions and are telling residents not to travel to NSW.