‘Perfect storm’ of heatwaves, hurricanes and floods caused by climate change is causing a collapse in biodiversity across the tropics, study warns

Earth’s tropical regions — the most diverse areas in the world — are facing an unprecedented collapse of biodiversity and ecosystems, a study reveals.

Researchers discovered that the combination of climate change, extreme weather and human activity is creating a perfect storm, bringing the regions to the brink of catastrophe.

More than 100 locations of tropical forests and coral reefs were mapped after being devastated by extreme climate events such as drought, floods and hurricanes.

Experts involved in the study claim the only way to prevent further damage is to cut carbon dioxide emissions.

More than 100 locations of tropical forests and coral reefs were mapped after being devastated by extreme climate events such as drought, floods and hurricanes. Researchers discovered climate change, extreme weather and human activity are combining for a perfect storm bringing the regions to the brink of catastrophe

‘For coral reefs, such extreme events reduce live coral cover and cause long-lasting changes to both coral and fish communities, compounding local threats from poor water quality and overfishing.

‘Although the long-term trajectory for reefs will depend on how extreme events interact with these local stressors, even relatively pristine reefs are vulnerable to both climate change and extreme weather.’

WHAT IS EL NINO?

El Niño is caused by a shift in the distribution of warm water in the Pacific Ocean around the equator.

Usually the wind blows strongly from east to west, due to the rotation of the Earth, causing water to pile up in the western part of the Pacific.

This pulls up colder water from the deep ocean in the eastern Pacific.

However, in an El Niño, the winds pushing the water get weaker and cause the warmer water to shift back towards the east. This causes the eastern Pacific to get warmer.

But as the ocean temperature is linked to the wind currents, this causes the winds to grow weaker still and so the ocean grows warmer, meaning the El Niño grows.

This change in air and ocean currents around the equator can have a major impact on the weather patterns around the globe by creating pressure anomalies in the atmosphere.

Tropical forest species are also being threatened by the increasing frequency of another weather event triggered by climate change — extreme hurricanes.

Dr Guadalupe Peralta from Canterbury University in New Zealand says the fall-out for tropical rainforests after extreme hurricanes is wide-reaching.

He said plants are destroyed which has a knock-on affect to the animals, birds and insects that rely on them for food and shelter.

‘In some regions, such as the Caribbean Islands, extreme weather events have decimated wildlife, reducing numbers by more than half,’ he continues.

‘We are starting to see another wave of global extinctions of tropical birds as forest fragmentation reduces populations to critical levels’, explained Dr Alexander Lees, from Manchester Metropolitan University.

The combination of higher temperatures with longer and more severe dry seasons has also led to the spread of unprecedented and large-scale wildfires. 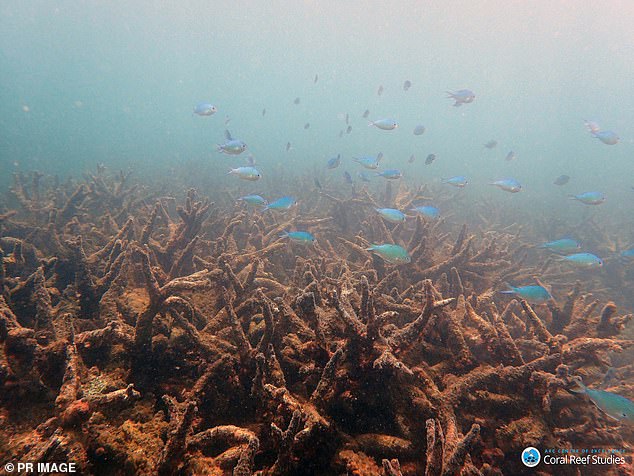 Dr Filipe França said that at the end of 2015, Santarém in the Brazilian state of Pará was one of the epicentres of that year’s El Niño impacts. it triggered extreme drought, forest fires and coral bleaching (file photo)

Dr Filipe França said that at the end of 2015, Santarém in the Brazilian state of Pará was one of the epicentres of that year’s El Niño impacts.

‘The region experienced a severe drought and extensive forest fires, and I was very sad to see the serious consequences for forest wildlife,’ he said.

The drought also affected the forests ability to recover from the fires and critically damaged some coral reefs.

Professor Nick Graham from Lancaster University said: ‘The 2015-16 coral bleaching event was the worst ever recorded, with many locations globally losing vast tracts of valuable corals.

‘Worryingly, these global bleaching events are becoming more frequent due to the rise in ocean temperature from global warming.’

WHAT IS CORAL BLEACHING?

Corals have a symbiotic relationship with a tiny marine algae called ‘zooxanthellae’ that live inside and nourish them.

When sea surface temperatures rise, corals expel the colourful algae. The loss of the algae causes them to bleach and turn white.

This bleached states can last for up to six weeks, and while corals can recover if the temperature drops and the algae return, severely bleached corals die, and become covered by algae.

In either case, this makes it hard to distinguish between healthy corals and dead corals from satellite images.

This bleaching recently killed up to 80 per cent of corals in some areas of the Great Barrier Reef.

Bleaching events of this nature are happening worldwide four times more frequently than they used to.

An aerial view of Australia’s Great Barrier Reef. The corals of the Great Barrier Reef have undergone two successive bleaching events, in 2016 and earlier this year, raising experts’ concerns about the capacity for reefs to survive under global-warming