Trucker films moment elderly driver hurtles towards him on the A725

Trucker Leonard Connelly, who captured the clip, said multiple vehicles had to swerve out of the way of the driver, who was travelling at 70mph.

Connelly, 58, was on the A725 near Blantyre, South Lanarkshire, when he saw the car coming the wrong way around the bend and then careering towards him on the carriageway on Sunday afternoon.

The quick-thinking delivery driver pulled into the left lane only a few seconds before the blue Renault drove straight past him.

The Renault continues driving down the fast lane of the dual carriageway.

He claims that if it wasn’t for the quick manoeuvring of the vehicles behind him, there could have been a multiple car collision with fatalities.

The clip was viewed 44,000 times after he posted it on Facebook yesterday with many witnesses contacting him  after seeing the footage.

One woman claimed that she followed the Renault driver for 20 minutes before she eventually pulled over.

‘She told me it was an old lady, and that she seemed confused. I don’t understand the mentality of it, I actually thought it was a boy racer they were going that fast’, he said.

Leonard Connelly’s delivery truck. One  social media user claimed that his truck would have ‘wiped her and her family out’ 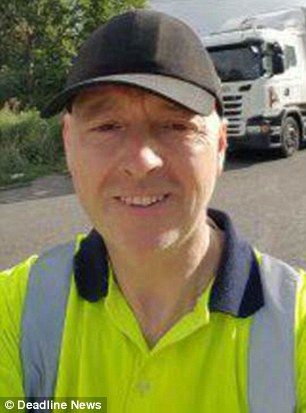 Another user, Andrea Wann wrote: ‘Folks, we witnessed this and lucky Leonard did move into the other lane as my family and I would probably have been wiped out by his truck. I followed and this was an old lady who was very disoriented. Accident by all means but not a deliberate act.’

Mr. Connolly spoke about how it could have been a multiple vehicle collision.

‘People could have died,’ he said.

‘There were families behind me out celebrating Mother’s Day with kids in the back, and they all had to swerve and pull in to get out of her way.

‘I understand she might be unwell and that’s made her confused, but I’m a Class 1 driver and I have to have a medical every year. I’m not having a go at old people, but I think there should be tests to make sure they are capable of driving properly, think of how many accidents have been caused by the elderly.’

A spokeswoman for Police Scotland said: ‘We are aware of the incident which took place on the A725 on Sunday 11 March and can confirm it was reported to police.

‘Inquiries are ongoing to trace the driver involved.’