The Trump administration is considering an application fee of $50 for any migrant who seeks asylum in the United States, it has been reported.

Immigration advocates are outraged at the proposal, which would apply to any migrant living in the U.S.

Anyone seeking asylum by claiming a fear of persecution at ports of entry would be exempt from the payment, according to BuzzFeed News.

If the proposal is implemented as policy, migrants who cannot afford to pay the $50 fee would not be able to apply for asylum.

The federal agency charged with handling asylum applications – U.S. Citizenship and Immigration Services – is currently dealing with a backlog of 300,000 pending cases.

Those who seek legal status in America by claiming they were victims of human trafficking or other humanitarian cases are not charged an application fee.

‘The reason we don’t charge for asylum applications is intuitive,’ said Guzman.

‘Even if it keeps one person from being able to apply, is that what we are about?

‘We are going to put a dollar amount on not getting sent back to a place of persecution?

An application fee, if approved, would be just the latest measure that the Trump administration has adopted in order to make it more difficult for migrants to apply for asylum.

Last month, Trump issued a proclamation that barred anyone who crossed the U.S.-Mexico border between official ports of entry from seeking asylum.

Trump issued the proclamation in response to caravans of migrants approaching the border.

A lower court judge temporarily blocked the ban and later refused to immediately reinstate it.

The administration appealed to the 9th Circuit Court of Appeals for an immediate stay of Judge Jon Tigar’s Nov. 19 temporary restraining order. 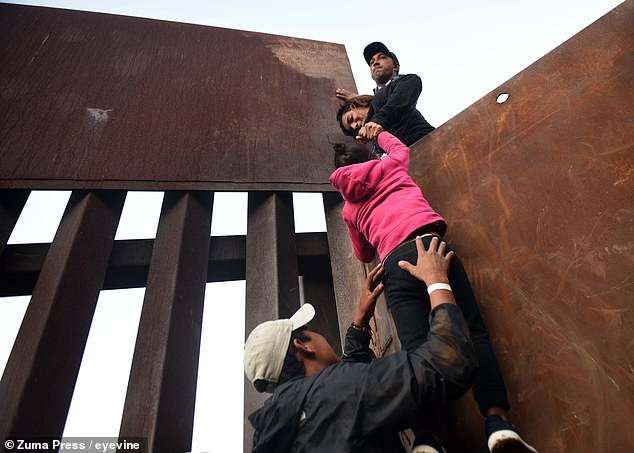 Anyone seeking asylum by claiming a fear of persecution at ports of entry would be exempt from the payment, according to the proposal. The image above shows Central American migrants scaling a border fence at Tijuana, Mexico and illegally crossing into the U.S. last week

The 9th Circuit ruled in a 2-1 decision last week that the ban is inconsistent with an existing U.S. law and an attempted end-run around Congress.

In his Nov, 19 ruling, Tigar sided with legal groups who argued that federal law is clear that immigrants in the U.S. can request asylum regardless of whether they entered legally.

The president ‘may not rewrite the immigration laws to impose a condition that Congress has expressly forbidden,’ the judge said in his order.

The ruling led to an unusual public dispute between Trump and Chief Justice John Roberts after Trump dismissed Tigar – an appointee of Trump’s predecessor – as an ‘Obama judge.’

Roberts responded with a statement that the federal judiciary doesn’t have ‘Obama judges or Trump judges, Bush judges or Clinton judges.’