The Trump administration has released its highly anticipated list of Russian politicians and business figures in an attempt to increase pressure on Russian President Vladimir Putin.

The list includes 114 individuals deemed by the Treasury Department to be senior Russian political figures. It also includes 96 people deemed to be ‘oligarchs.’ The Treasury says each has an estimated net worth of $1 billion or more.

The list was required by a law passed by Congress last year to punish Russia for meddling in the 2016 U.S. election.

US President Donald Trump (center), is pictured with US Secretary of State Rex Tillerson (left) and UN Ambassador Nikki Haley (right) on January 29, 2018 in Washington, D.C.

The Trump administration had until Monday to release the list, aimed at exposing those who have gained wealth or power through association with Putin. It’s been informally referred to as the ‘Putin list.’

The list does not trigger any U.S. sanctions targeting the individuals.

‘Today, we have informed Congress that this legislation and its implementation are deterring Russian defense sales,’ State Department spokeswoman Heather Nauert said in a statement.

‘Since the enactment of the legislation, we estimate that foreign governments have abandoned planned or announced purchases of several billion dollars in Russian defense acquisitions.’ 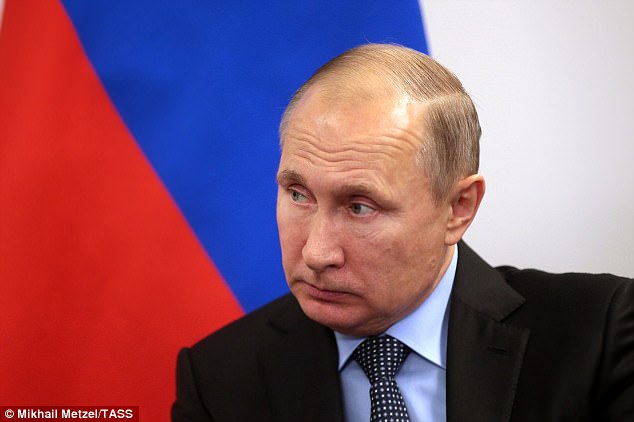 Russia’s President Vladimir Putin is pictured here during a meeting with the prime minister of Israel in Moscow, Russia on January 29 2018

The administration faced a deadline on Monday to impose sanctions on anyone determined to conduct significant business with Russian defense and intelligence sectors, already sanctioned for their alleged role in the election.

But citing long time frames associated with major defense deals, Nauert said it was too soon to tell how effective the law had been, so it was better to wait to impose those sanctions.

‘From that perspective, if the law is working, sanctions on specific entities or individuals will not need to be imposed because the legislation is, in fact, serving as a deterrent,’ she said in a statement.

President Donald Trump’s administration also did not make public reports required by Monday under the bill he reluctantly signed into law on Aug. 2, just six months into his presidency. 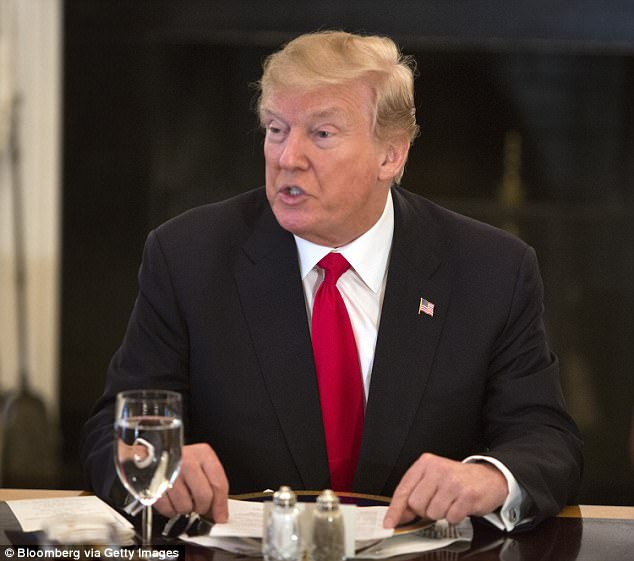 Donald Trump speaks during a meeting with members of the United Nations Security Council at the White House in Washington, D.C. on Monday, January 29, 2018

The administration said it would release at least some of that information to Congress, but it was not immediately clear whether it would be made public, or kept classified.

Trump, who said he wanted warmer ties with Russia, had opposed the legislation as it made its way through Congress last year. Monday’s deadline was seen as a test of his willingness to crack down on Russia.

Members of Congress, including Democrats and some of Trump’s fellow Republicans, have been clamoring for his administration to use sanctions to punish Moscow for past election interference and prevent future meddling in U.S. polls.

Several congressional committees, as well as Special Counsel Robert Mueller, are investigating whether Russia tried to tilt last November’s election in Trump’s favor, using means such as hacking into the emails of senior Democrats and promoting divisive social and political messages online. Trump and the Kremlin have separately denied any collusion.

Senator Bob Corker, the Republican chairman of the Senate Foreign Relations Committee, one of the main congressional architects of the sanctions law, said he was not concerned that the administration did not announce sanctions or release all of the required reports on Monday.

‘This is when sanctions season begins, and so they’ll be rolling them out,’ he told reporters.

‘We feel pretty good about the process,’ Corker said. ‘They’re rushing the information over to us today, and by the close of business, they’re going to have two of the three, as I understand it. So they’re taking it very seriously.’