Close aides to President Trump were baffled at his selection of Dr. Ronny Jackson, his personal physician, to lead the Veterans Administration, according to reporting from Axios.

Nobody at the White House that the publication spoke with was able to answer how Jackson – known for the glowing review he gave in January of the president’s health – is qualified to lead the federal government’s No. 2 agency in size, as some allies are already fretting a tough confirmation fight.

‘Harriet Miers,’ one longtime Republican lobbyist uttered to Axios, name-dropping the White House counsel President George W. Bush nominated to the Supreme Court in 2005, whose name was withdrawn when Democrats and Republicans complained she wasn’t qualified. 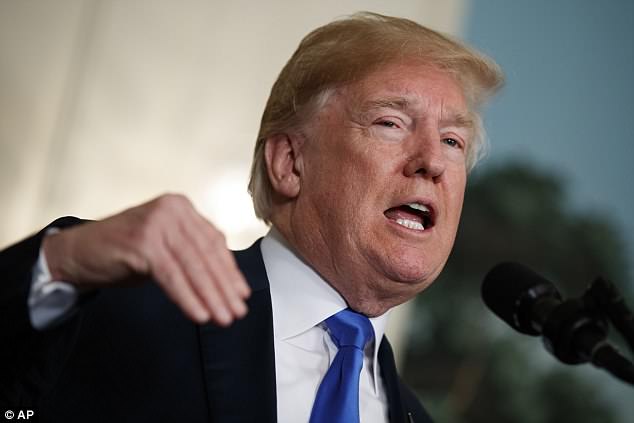 Twitter move: Trump used his favorite medium to dispense with David Shulkin, making him the second cabinet secretary got rid of in a tweet

President Trump announced his decision to hire Jackson via Twitter Wednesday evening, notifying the country that David Shulkin, his first Veterans Affairs secretary, was out.

‘I am pleased to announce that I intend to nominate highly respected Admiral Ronny L. Jackson, MD, as the new Secretary of Veterans Affairs,’ Trump tweeted Wednesday evening. ‘In the interim, Hon. Robert Wilkie of DOD will serve as Acting Secretary. I am thankful for Dr. David Shulkin’s service to our country and to our GREAT VETERANS!’

Jackson is the White House physician who gave Trump a clean bill of health in January, declaring he had ‘incredible genes’.

Jackson wasn’t even being mentioned as a possible replacement, though played a memorable role in the administration when he came into the briefing room January and gushed about the president’s health on the heels of completing Trump’s first-in-office physical.

‘He has a lot of energy and a lot of stamina,’ Jackson said at one point. ‘He’s very sharp. He’s very articulate when he speaks to me,’ the Navy doctor said at another. 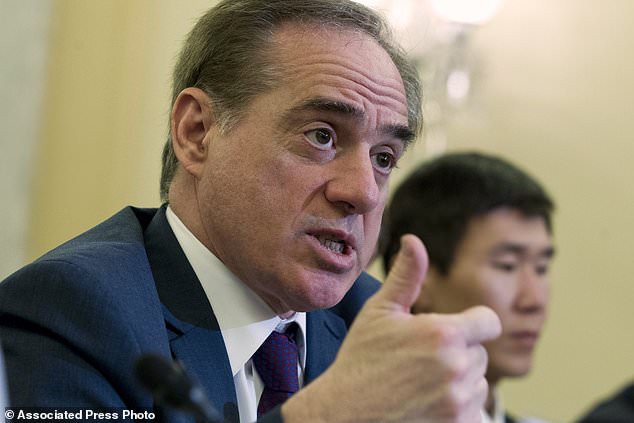 Veterans Affairs Secretary David Shulkin (pictured) was booted from his job after travel controversies put him in the cross-hairs of Trump, who viewed his scandals as a distraction

His only gripe was that the president was slightly overweight.

Meanwhile, Shulkin has been a headache for the president as of late.

The VA’s inspector general was also looking into a complaint that Shulkin asked his security detail to come along with him to Home Depot, and cart around furniture items.

Administration officials who talked to the Associated Press last weekend, while Trump was spending time at Mar-a-Lago, said an announcement on Shulkin could come this week, with one giving it a ’50-50′ chance he would be ousted in the next day or two.

Instead he lasted almost through the end of the business day on Wednesday.

‘He has been a great supporter of veterans across the country and I am grateful for his service,’ Trump added.

In an op-ed for the New York Times published Wednesday, Shulkin defended his service.

‘I am proud of my record and know that I acted with the utmost integrity,’ Shulkin said. ‘Unfortunately, none of that mattered. As I prepare to leave government, I am struck by a recurring thought: It should not be this hard to serve your country.’

He also noted that the ‘environment in Washington has turned so toxic, chaotic, disrespectful and subversive that it became impossible for me to accomplish the important work that our veterans need and deserve.’

Over the weekend, a source told the AP that the White House was looking at a half-dozen candidates to fill Shulkin’s job. 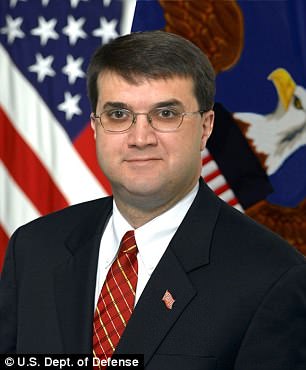 The president decided to put Robert Wilkie (pictured), the undersecretary of defense for personnel and readiness, in place as acting VA secretary, instead of briefly promoting deputy VA secretary Tom Bowman

Fox & Friends Weekend co-host Pete Hegseth looked on deck to get the job, as the president has been keen to hire television personalities of late.

He brought Larry Kudlow on to be his chief economic adviser, while announcing last Thursday, again via Twitter, that Fox News contributor John Bolton would be taking over for National Security Advisor H.R. McMaster.

Jackson’s move to the helm of Veterans Affairs isn’t entirely unexpected, however, as the president has tended to promote from within.

For instance, when Trump decided to boot Secretary of State Rex Tillerson earlier this month, he announced he wanted to put current CIA Director Mike Pompeo in Tillerson’s place.

WHO IS DR. RONNY JACKSON?

Dr. Ronny Jackson is currently a physician to the president for President Donald Trump. On Wednesday, Trump nominated him to run Veterans Affairs.

A Texas native, Jackson attended Texas A&M for undergraduate, and received his medical degree from the University of Texas’ Medical Branch, graduating in 1995.

That same year, Jackson began his active duty Naval service in Portsmouth, Virginia. He completed a number of medical internships and became the honor graduate of the Navy’s Undersea Medical Officer Program, before completing his residency at the top of his class in 2004.

The next year, he became part of Operation Iraqi Freedom as an emergency medicine physician in charge of resuscitative medicine.

Jackson was promoted to a White House physician while still deployed in Iraq in 2006. He’s served in three administrations – those of Presidents George W. Bush, Barack Obama and Donald Trump – and held a variety of positions, including the physician supervisor for Camp David, before being promoted to physician to the president under Obama in 2013.

Jackson has three children and lives in Silver Spring, Maryland, a suburb of Washington, D.C.

Bowman had also come under criticism at the White House for being too moderate to push Trump’s agenda of fixing veterans’ care.