Mother Jones first published the blockbuster allegations and the White House’s response: that 97-year-old Ruth Glosser was not killed by COVID-19 and rather ‘died peacefully in her sleep from old age.’

Miller’s uncle David Glosser, a Trump critic who has been estranged from his nephew since the 2016 election, painted a different picture of Glosser’s demise and gave Mother Jones a copy of her death certificate that says ‘respiratory arrest’ due to ‘COVID-19’ killed her. 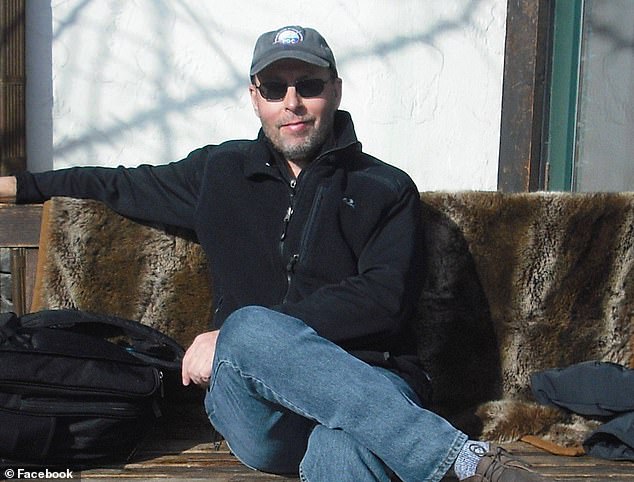 David Glosser, Miller’s uncle on his mom’s side, took to Facebook to report that his mother and Miller’s grandmother had died of COVID-19 on the Fourth of July. Glosser then showed Mother Jones reporter David Corn his mother’s death certificate

Proof: The White House claimed that Miller’s grandmother did not die from COVID-19 – despite the death certificate listing it 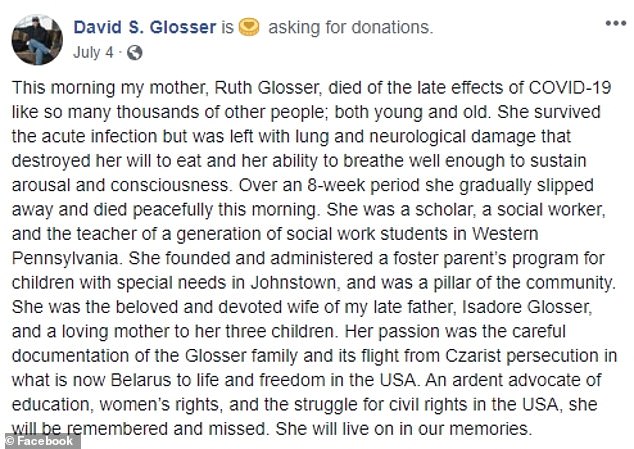 David Glosser described his mother and Stephen Miller’s grandmother Ruth Glosser in a July 4 Facebook post, calling her a ‘scholar, a social worker and the teacher of a generation of social work students in Western Pennsylvania’

‘She had what might be regarded as a weak case,’ David Glosser told Mother Jones’ David Corn. ‘She survived the immediate acute effects but lost 20 pounds within a few weeks and was very much weakened.’

‘She lost the will to eat because of enormous fatigue, enormous confusion, and the loss of her sense of smell and taste, and her lungs continued to deteriorate,’ he continued. ‘Finally, she could not sustain a level of oxygen to remain conscious. In accordance with her living will, the oxygen was withdrawn.’

She had been living in an assisted living facility outside Los Angeles, after spending most of her life in Johnstown, Pennsylvania, a small city east of Pittsburgh.

The White House lashed out when Corn asked for comment.

‘This is categorically false, and a disgusting use of so-called journalism when the family deserves privacy to mourn the loss of a loved one,’ an unnamed White House spokesperson said. ‘His grandmother did not pass away from COVID. She was diagnosed with COVID in March and passed away in July so that timeline does not add up at all.’

‘His grandmother died peacefully in her sleep from old age,’ the statement continued. ‘I would hope that you would choose not to go down this road.’

But Glosser had posted a note about his mother’s death publicly to his Facebook account, indicating she had died ‘of the late effects of COVID-19’ the morning of July 4.

‘She was a scholar, a social worker, and the teacher of a generation of social work students in Western Pennsylvania. She founded and administered a foster parent’s program for children with special needs in Johnstown, and was a pillar of the community,’ Glosser wrote.

Glosser also made reference to the family’s immigrant past – which he has called attention to previously when publicly criticizing Miller, his nephew.

‘Her passion was the careful documentation of the Glosser family and its flight from Czarist persecution in what is now Belarus to life and freedom in the USA,’ Glosser wrote on Facebook.

He asked people to donate in his mother’s honor to HIAS, a Jewish group dedicated to helping refugees.

Talking to Mother Jones, Glosser said that while the Trump administration is not to blame for his mother being 97-years-old, the president ‘and his enablers bear tremendous responsibility for the failure to respond and their continued unwillingness to do what public health experts say must be done.’

Glosser said an effective response might have seen 20,000 U.S. deaths.

‘So Trump bears substantial responsibility for the deaths of over 100,000 Americans who didn’t need to die, including my mother,’ Glosser said.

Miller’s role in the COVID-19 crisis was to help Trump draft an Oval Office speech, delivered on March 11. Trump announced a travel ban from Europe that caused chaos and confusion for American travelers who believed they wouldn’t be let back in the U.S.  Miller, an immigration hard-liner, has seemingly influenced Trump to continue pressing anti-immigrant policies throughout the pandemic.

Miller’s wife, Vice President Mike Pence’s spokeswoman Katie Miller, who is pregnant with the couple’s first child, tested positive for COVID-19 in May. She’s fully recovered and back at work.

Glosser told Corn he hadn’t spoken to Miller since the 2016 campaign and described him as an ‘ambitious kid’ who ‘for some reason decided to become infatuated with the idea of white supremacy.’

Miller, Glosser said, ‘sees Trump as a useful idiot in his quest to advance his white power agenda … He has been able to use Trump to advance his political vendetta against the world.’

Glosser also told Mother Jones that he wasn’t surprised Miller had a role in the administration’s coronavirus failure.

‘He has no ability to demonstrate empathy,’ Glosser said.

Ruth Glosser, according to David Glosser, was highly ‘disturbed’ when Trump became president.

‘She was terribly torn between the normal love for grandchildren and horror at the racist content of Trump’s policies and Stephen’s role in it,’ David Glosser said.