Donald Trump and his children have agreed to be deposed in a class action lawsuit charging that the family duped people into investing in allegedly dodgy companies.

Don Jr will sit for his deposition first on May 10, followed by his brother Eric on May 12 and the ex-president on June 16.

But there is still not set date for Ivanka, because ‘defendants have not yet offered a deposition date.’

Trump’s other children, Tiffany and Barron, are not named in the suit.

There has been no location set for the proceeding, according to NBCNews.

Filed in 2018, investors claim that the Trump got ‘secret’ payments from the multi-level marketing company ACN Opportunity, a vitamin and health company, the Trump Network and the Trump Institute, a business training company that would teach participants the ‘secrets to success.’

In exchange, the suit says the family would promote the businesses on ‘Celebrity Apprentice’ and other live events.

The lawsuit claims that the family raked in million on the scheme between 2005 and 2015.

‘Donald J. Trump told prospective investors that ‘[y]ou have a great opportunity before you at ACN without any of the risks most entrepreneurs have to take,’ and that ACN’s flagship videophone was doing ‘half-a-billion dollars’ worth of sales a year.’

Trump also told investors that he had ‘experienced the opportunity’ and ‘done a lot of research,’ and that his endorsement was ‘not for any money.’ Not a word of this was true.’

The Trumps never owned any of the companies that they touted and lawyers for the family have argued that they aren’t responsible for investors’ losses.

The Trump lawyers said that they were merely giving opinion and the statements amounted to ‘puffery,’ NBC reported.

This is one of many depositions Trump and his kids have had to sit through lately. Others include, an assault outside Trump Tower and a lawsuit claiming fraud in the Trump inauguration, according to CNN.

They are currently battling New York Attorney General Letitia James to avoid giving their sworn testimony in a civil case charging they inflated the value of their properties.

Trump sued the AG to halt the suit. 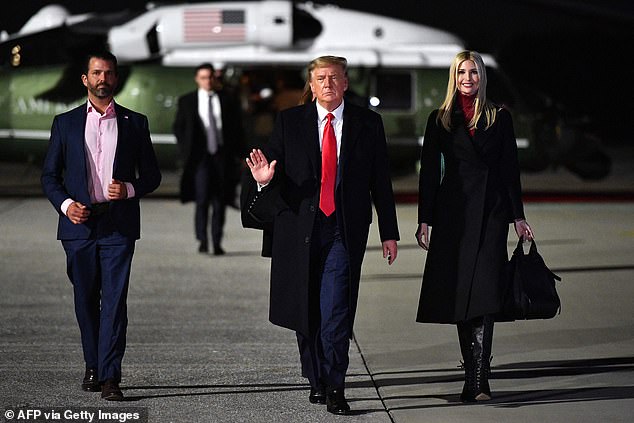