President Donald Trump took joined in some of the Apollo 11 anniversary fever by hosting the two living astronauts who helped carry out the historic mission to the moon.

Buzz Aldrin, the Lunar Module pilot for Apollo 11, and Michael Collins, who served as command module pilot, were both listed as attending an Oval Office photo-op that the White House opened to the press at the last minute on Friday.

President Donald Trump speaks with Apollo 11 crew member Buzz Aldrin on July 19, 2019, at the White House in Washington, DC, during a ceremony commemorating the 50th anniversary of the Moon landing. Also attending were Michael Collins and children of Neil Armstrong 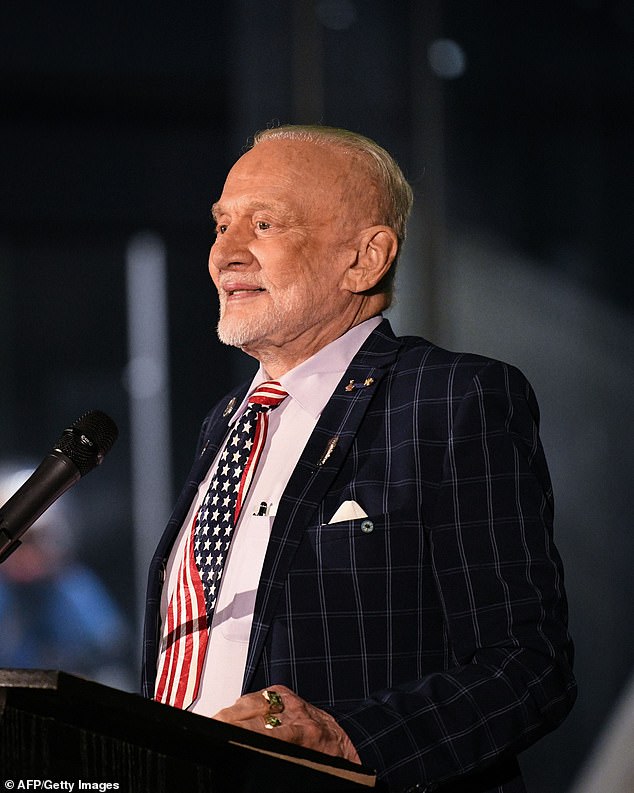 Neil Armstrong, the former Korean War aviator and Navy test pilot who commanded the mission, died in 2012. He was represented by two sons, Eric Armstrong and Marc Armstrong. 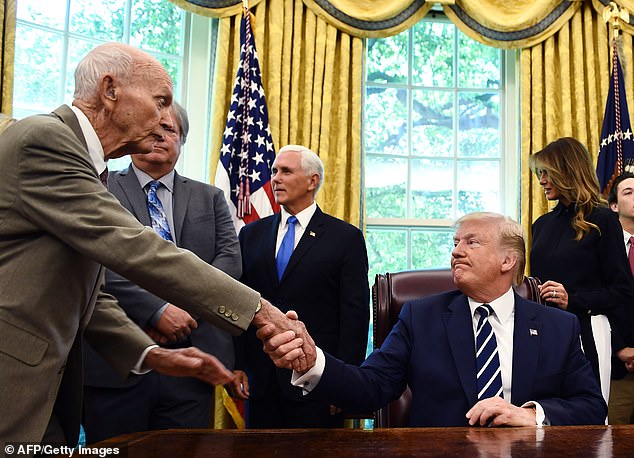 President Donald Trump shakes hands with Apollo 11 crew member Michael Collins on July 19, 2019, at the White House in Washington, DC, during a ceremony commemorating the 50th anniversary of the Moon landing. Collins served as command module pilot orbiting above the Moon on the historic mission

Trump, First Lady Melania Trump, and Vice President Mike Pence were all listed as guests in a release put out by the White House.

Aldrin and Armstrong landed on the moon 50 years ago Saturday. Collins’ role was to stay behind in the command module orbiting above the surface.

The Oval Office photo-op came amid other events to mark the anniversary.

Images of the 363-foot-high (111-metre) rocket that carried the three astronauts to the Moon were beamed onto the side of the Washington Monument on Tuesday night.

Other events were held to mark it, with veteran astronauts speaking at a conference near the Kennedy Space Center in Florida and a dinner at in Kansas City, Missouri, where the rocket was built. 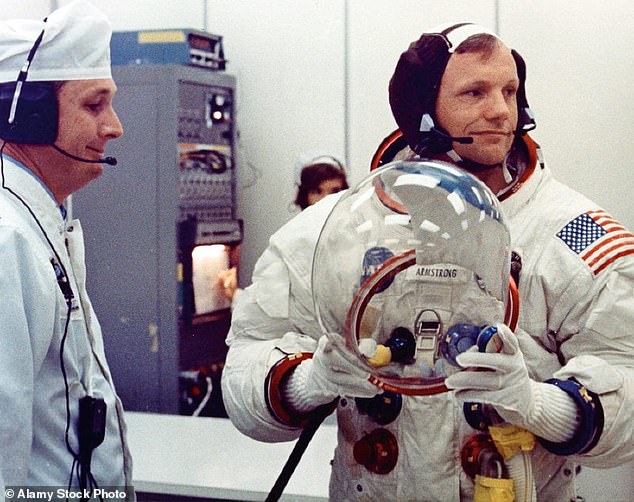 Neil Armstrong prepares to don his helmet as he puts on his space suit as he prepares for the launch of the Apollo 11 Mission to the Moon on Wednesday, July 16, 1969 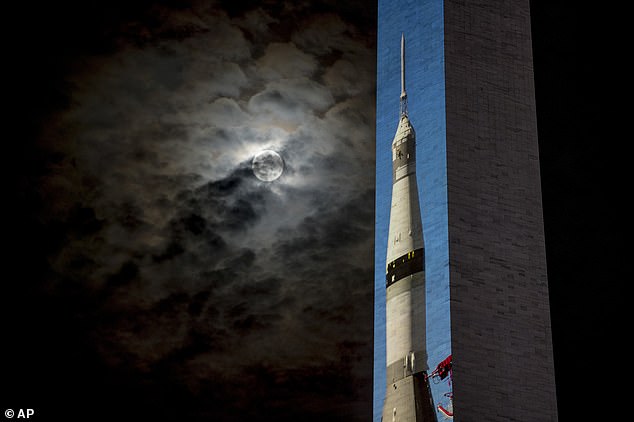 The moon is visible through clouds, left, as an image of a 363-foot Saturn V rocket is projected on the east face of the Washington Monument 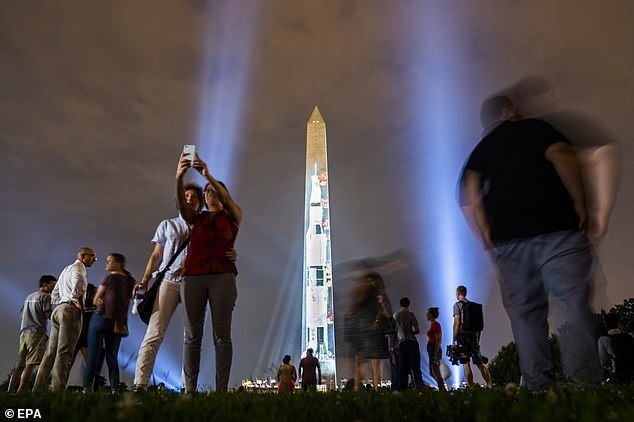 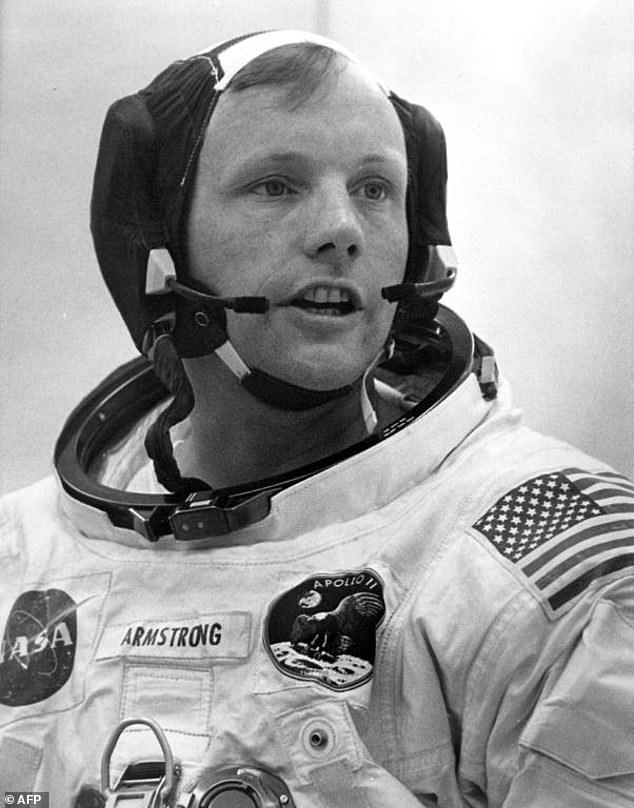 Michael Collins said that despite being an introvert by nature, Neil Armstrong (shown here) was the best spokesperson among the crew, making audiences feel like they had been along for the ride. Armstrong was represented by family at the event

The Saturn V rocket that got the three men to the moon was overseen by ex-Nazi Wernher Von Braun.

Collins described how the mission was broken into discrete goals such as breaking free of the Earth’s gravity or slowing down for lunar orbit.

‘The flight was a question of being under tension, worrying about what’s coming next. What do I have to do now to keep this daisy chain intact?’

Unlike Collins, Aldrin has remained relatively elusive and did not participate at Tuesday’s launchpad event.

Aging but active on Twitter, and often seen in stars-and-stripes socks or ties, the 89-year-old has faced health scares and family feuds, culminating in a court case over finances, which was settled in March.

He is the second of 12 men to have set foot on the Moon, only four of whom are still alive.

Collins has been fielding questions for half a century about whether he felt lonely or left out.

‘I was always asked, wasn’t I the loneliest person in the whole lonely history of the whole lonely solar system when I was by myself in that lonely orbit?’ he said. ‘And the answer was, ‘No, I felt fine!’

‘I would enjoy a perfectly enjoyable hot coffee, I had music if I wanted to. Good old Command Module Columbia had every facility that I needed, and it was plenty big and I really enjoyed my time by myself instead of being terribly lonely.’