The president and the vice president’s portrait include a double dose of patriotism, as the Republican politicians are both standing in front of the American flag – and sporting American flag pins.

The portrait release comes especially late for an administration, as the photos are usually one of the first things commissioned when a new president and vice president take office.

The White House unveiled President Trump’s official portrait on Tuesday, which will be hung in government offices – and sold to the public 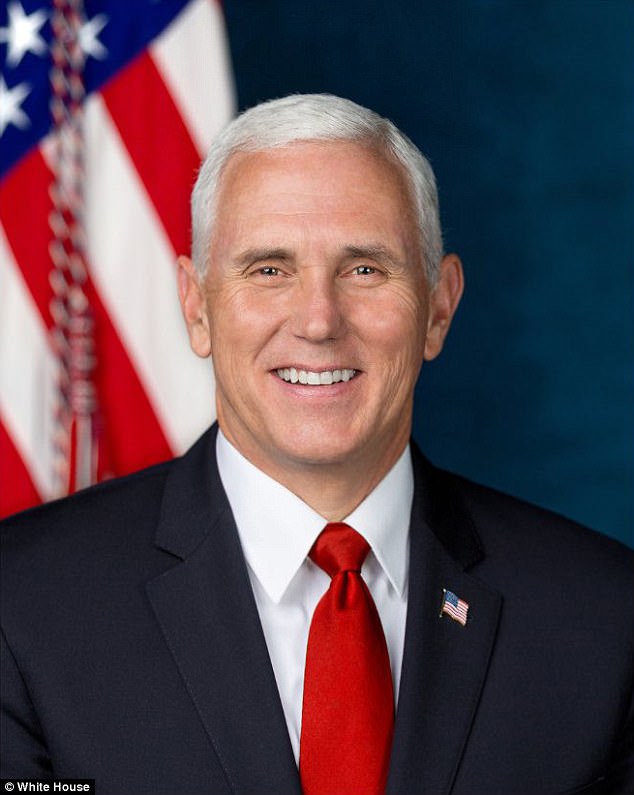 The White House’s statement on the portraits was short.

It simply said that they had been released, would be hung in federal facilities and would also be sold to the public for a fee.

The portraits are also generally hung in U.S. embassies around the world.

President Trump hired photographer Shealah Craighead in January, but despite his entertainment background he was slow to warm up to her lens.

Craighead was a former staff White House photographer for President George W. Bush, but even with that experience, she didn’t seem to get the same kind of access as President Barack Obama’s main photographer, Pete Souza.

In the early months of the administration, the White House’s Flickr page remained empty, while postings on Instagram, a more millennial-friendly photo-sharing site, came rarely.

The White House did, however, release a portrait of first lady Melania Trump in April.

The former model is posing in front of one of the large White House windows, arms crossed, with her face forward, giving the American public a sultry half-smile.

‘I am honored to serve in the role of First Lady, and look forward to working on behalf of the American people over the coming years,’ Melania Trump said in an accompanying statement.

The president’s new portrait is also a departure from his Twitter photo, where he looks stern and gruff.

The New York Times explained in March that this was done on purpose.

As a candidate, Trump had nixed any campaign imagery that remotely hinted at weakness – including the billionaire businessman smiling.