Donald Trump has shared a video of a black man knocking a white Macy’s employee to the floor and punching him in the store, and asked: ‘Where are the protesters?”

The video clip was filmed on June 15 in Flint Township, Michigan.

The unnamed black man is seen attacking the employee, who falls to the floor and tries to crawl away.

The brother of the attacker, FT Quay, a 22-year-old rapper, told the New York Post that the white employee had called him a ‘n*****’ when he asked about a shirt size.

He said the employee answered them, and returned to his phone call, where he allegedly told someone on the phone it was ‘no one, just some n****r.’

Quay said that the violent reaction ‘was spur of the moment.’

‘I just want people to know the real story of really what happened and what’s in the description of me and my brother just walking into Macy’s just minding our own business,’ he said.

And, yes, we made a petty joke and asked the guy “Was the shirt too little?”. He was just being funny,’ said Quay, who declined to identify his brother by name. 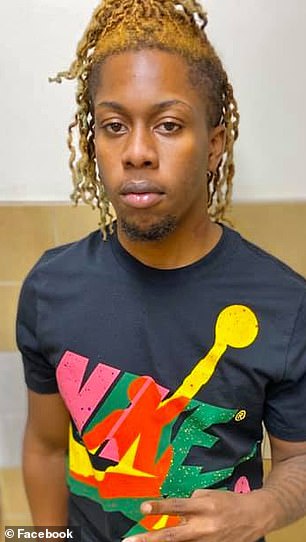 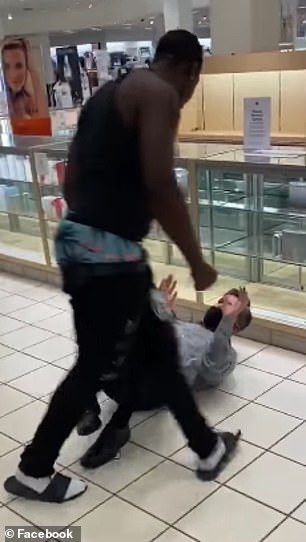 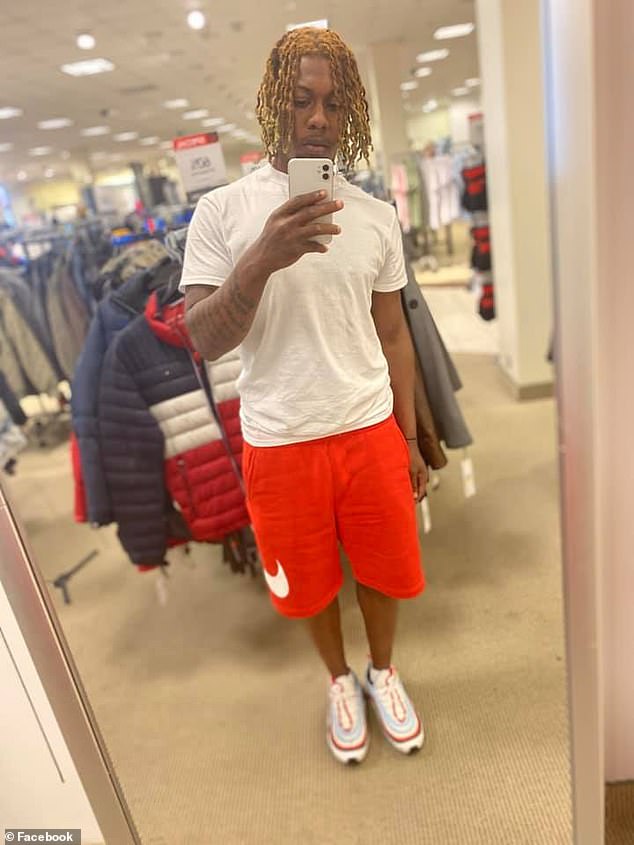 Quay posted this photograph on his Facebook page on the same day that the incident took place. This picture was likely taken moments before the filmed attack

Macy’s issued a statement Friday in which the company claimed the attack was ‘unprovoked’.

Quay shared the video on Facebook and claimed that he and a ‘bro’ went to the mall and asked a man on the phone about a shirt size.

But Quay maintained that he heard the employee utter the racial slur.

‘At the moment, it was surprising,’ Quay said.

‘I was just like, whatever. Let me get this down (on video). Let me just let people see.’ 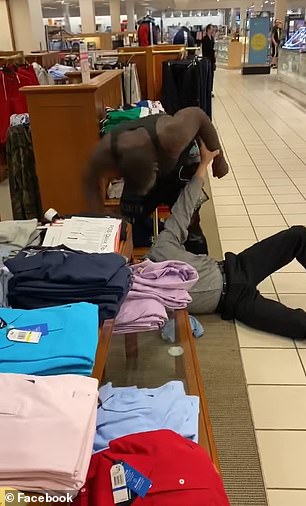 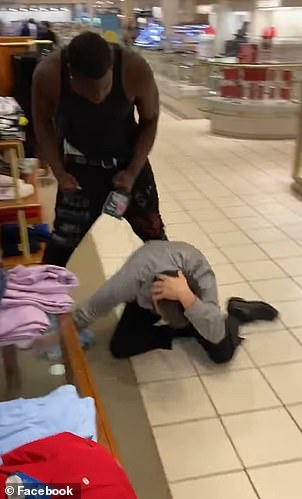 The shocking video was filmed at the Macy’s store at the Genesee Valley Center in Flint Township and has circulated around social media. The man attacked was a store employee

‘I’m behind my brother fully, because with everything else going on, what else can we do at this point?’ Quay said.

‘All the hate and everything is not needed because nothing works.

‘It was spur of the moment. That was his instinct.’

FT Quay’s social media was taken offline as of Friday.

‘We are deeply saddened about the incident that took place on Monday (June 15) at Macy’s Genesee Valley as the safety of Macy’s customers and colleagues is our top priority,’ said Andrea Schwartz, senior director of media relations for Macy’s.

She told MLive-The Flint Journal: ‘Violence in the workplace of any kind is unacceptable. All the materials from the evening have been reviewed and it is clear that the attack was unprovoked.

The company did not mention that the man seen being punched in the video was an employee but this was later revealed by local law enforcement.

Police confirmed they were investigating the video on Friday after it was widely circulated on social media.

‘We are looking for them as we speak,’ township police Lt. Brad Wangler told MLive. 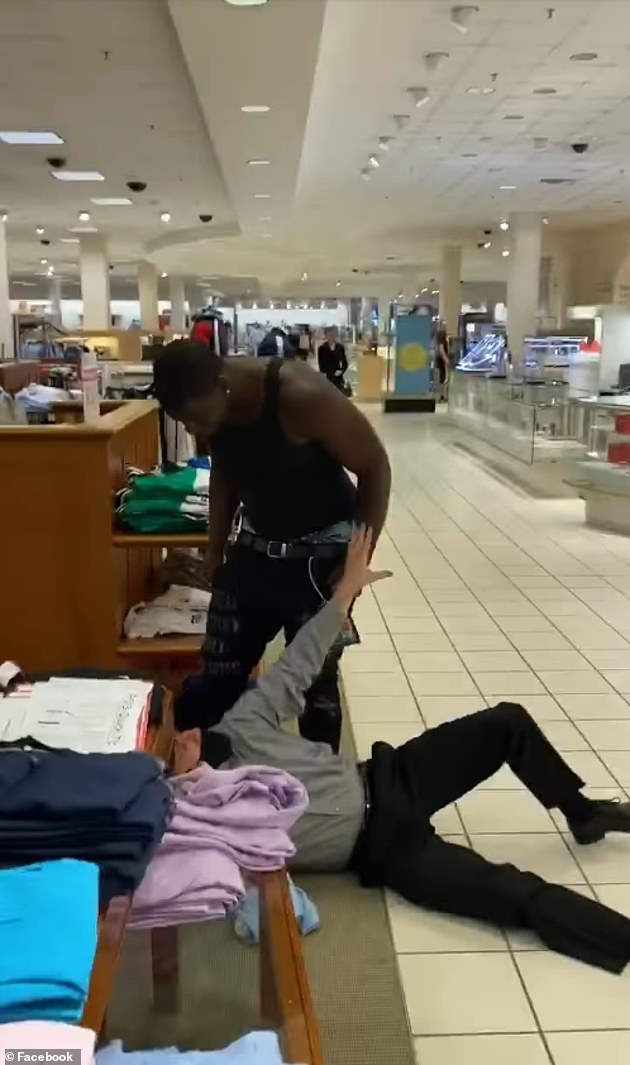 Quay shared the video on Facebook and claimed the attack began after the employee allegedly told someone on the phone ‘no one just some n****r’ when hey asked him a question. Macy’s claimed in a statement Friday, however, that the attack had been unprovoked

‘It’s not something that’s been put on the back burner. We want to find out what happened.’

Police said they were called to the scene at around 5.45pm on Monday.

‘Officers learned an employee of the store was assaulted by a young black male who fled the scene with a second individual after the assault,’ they said in a statement Friday.

‘Store surveillance video confirmed the assault against the employee. Investigators also learned the assault was recorded by the second individual and shared on social media.’

Local rapper FT Quay took to Facebook shared the video on Monday and claimed that the clip was not the entire video. The alleged racial slur used by the employee is not heard 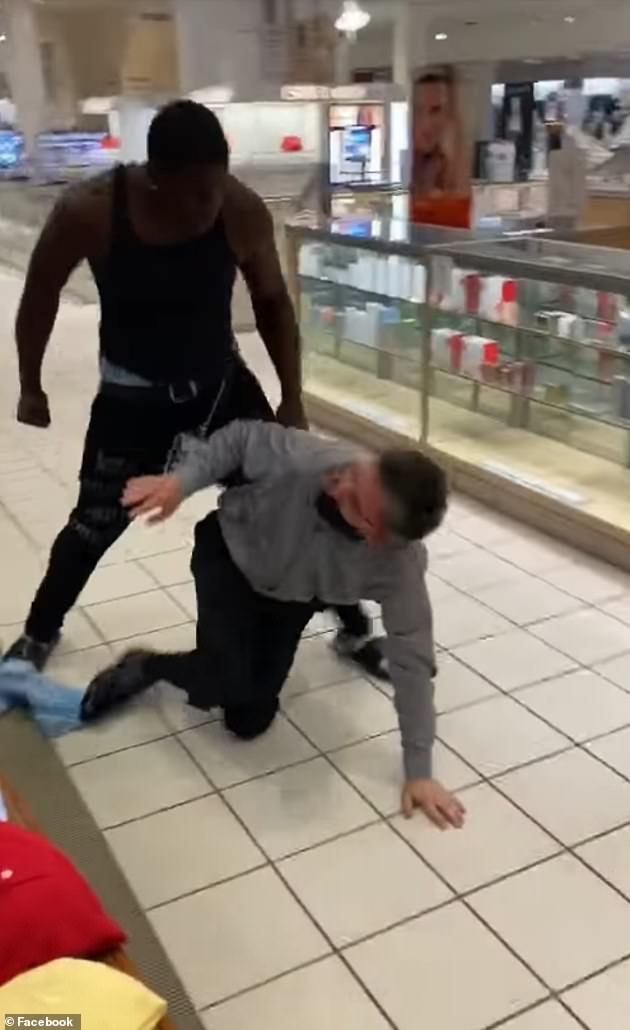 Flint Township Lt. Brad Wangler said that they are investigating the incident but no one is currently in custody. The police responded to reports of an assault at 5.45 pm Monday

The brief video shared by Quay shows the man punching the other in the face, with the unsuspecting man immediately asking: ‘What are you doing that for?’

As the man on the ground extends his arm to keep the angered man away, the assailant punches him again and tells him not to touch him.

At this point, the employee tells the black man ‘I didn’t touch you… I’m sorry’ as the assailant punches him a few more times.

Flint Township Lt. Brad Wangler said that they are investigating the incident but no one is currently in custody.

A Macy’s spokesperson added that they have beefed up security at the store following the incident.