Gillum laced his victory speech with attacks on the ‘derision and the division that has been coming out of our White House’ – and has called for Trump’s impeachment.

If he wins in November, Gillum will become the state’s first black governor. He quickly mopped up the endorsement of his most prominent rival, former House Rep. Gwen Graham, the daughter of popular senator and governor Bob Graham.

The victory by the Bernie Sanders-backed progressive sets up Florida as a marquis governor’s race in November. He will face off against Trump loyalist Ron DeSantis, who himself trounced an establishment favorite, former Rep. and state Agriculture Commissioner Adam Putnam.

Andrew Gillum with his wife, R. Jai Gillum at his side addresses his supporters after winning the Democrat primary for Florida governor on Tuesday. Within hours Trump attacked him as a ‘failed socialist’

‘Not only did Congressman Ron DeSantis easily win the Republican Primary, but his opponent in November is his biggest dream….a failed Socialist Mayor named Andrew Gillum who has allowed crime & many other problems to flourish in his city,’ Trump wrote.

‘This is not what Florida wants or needs!’

Leon County, which included Tallahassee, had the highest crime rate in Florida for three years in a row. The statistics were collected by the FBI, an agency Trump frequently attacks. Last month, Gillum called for GOP Gov. Rick Scott to declare a state of emergency and suspend the state’s ‘Stand Your Ground’ law on gun use, the Tampa Bay Times reported. 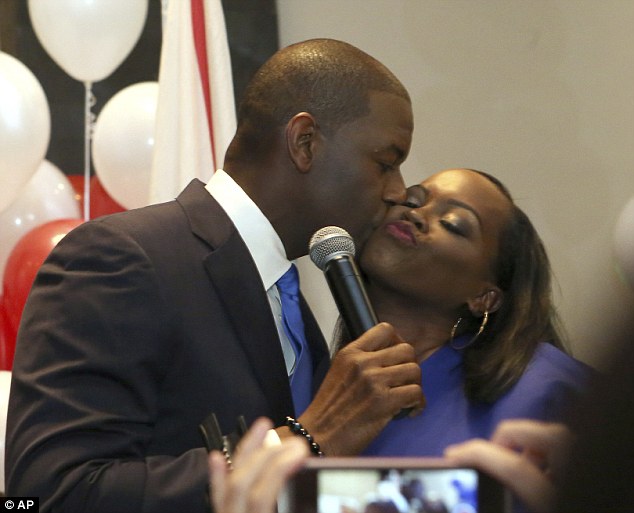 Andrew Gillum kisses wife, R. Jai Gillum as he addresses his supporters after winning the Democrat primary for governor on Tuesday, Aug. 28, 2018, in Tallahassee, Fla. If elected, he would be the first African-American governor of the state 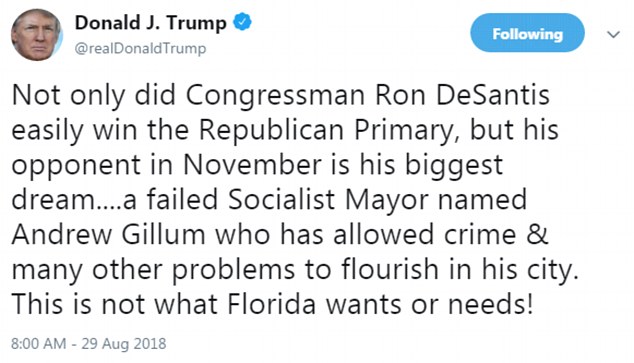 Trump wrote that having Gillum win was the ‘biggest dream’ for ultra-Trump supporting Rep. Ron DeSantis, the GOP candidate

From his victory speech, Gillum showed every intention of trying to nationalize the race – which takes place in an off-year election when Trump will be driving both supporters and opponents to the polls.

‘We’re going to make clear to the rest of the world that the dark days that we’ve been under, coming out of Washington, that the derision and the division that has been coming out of our White House, that right here in the state of Florida we are going to remind this nation of what is truly the American way,’ Gillum told cheering supporters Tuesday night.

Trump congratulated Ron DeSantis for winning the Republican primary for Florida governor, as a liberal endorsed by Senator Bernie Sanders pulled off an upset in the Democrat race, setting up an ideological clash in the key swing state.

‘Such a fantastic win for Ron DeSantis and the people of the Great State of Florida. Ron will be a fantastic Governor. On to November!’ Trump wrote in a tweet.

The conservative DeSantis easily won the primary election on Tuesday after a campaign in which he highlighted his enthusiastic loyalty to Trump. 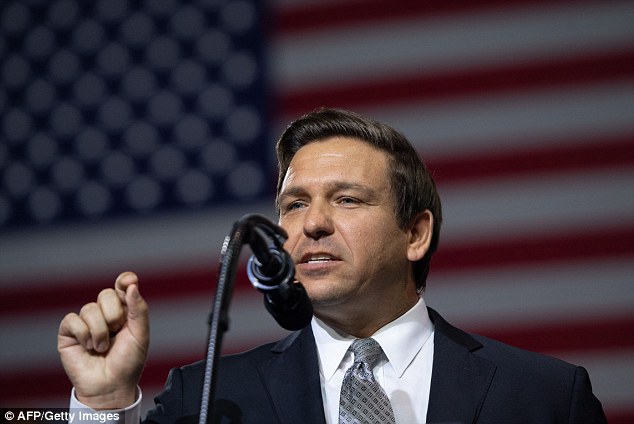 DeSantis, who was endorsed by Trump, beat state Agriculture Commissioner Adam Putnam for the Republican nomination for governor.

‘I am not always the most popular guy in D.C., but I did have support from someone in Washington. If you walk down Pennsylvania Avenue, he lives in the White House with the pillars in front of it,’ DeSantis told supporters after his win, noting he had spoken to Trump.

DeSantis made his allegiance to Trump the central theme of his race, airing a campaign ad in which he urged his toddler daughter to ‘build that wall’ with toy blocks.

In a surprise upset in the Democratic primary for Florida governor, Andrew Gillum, the mayor of Tallahassee, beat moderate Gwen Graham, the daughter of former governor and U.S. Senator Bob Graham.

Gillum, 39, who would be the state’s first black governor, surged in the final stages of the race and was backed by Sanders.

Hypothetical matchups show Gilliam and DeSantis roughly evenly matched in the race, which politicos will be closely watching for signals of 2020. 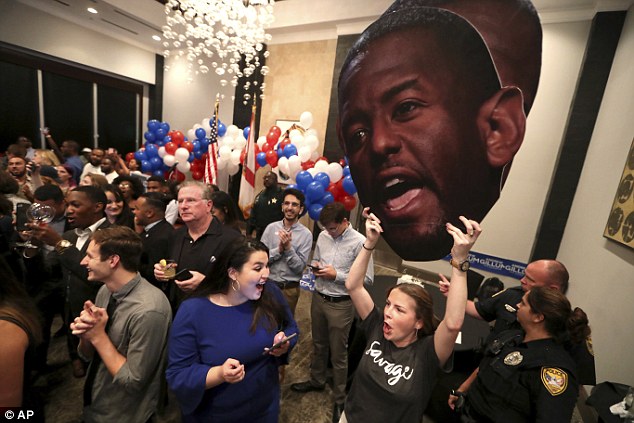 Key swing state Florida went to Trump in 2016, after voting for Barack Obama in the two prior presidential elections.

This November, Florida also will host one of the country’s top U.S. Senate races between term-limited Republican Governor Rick Scott, who won the Senate nomination against token opposition, and incumbent Democrat Bill Nelson.

The Senate race is currently a tossup, with the latest RCP polling average showing Scott up by a razor-thin margin of 1.5 points.

After congratulating both DeSantis and Scott, Trump went on a tear on Twitter late Tuesday, tweeting about a variety of topics. 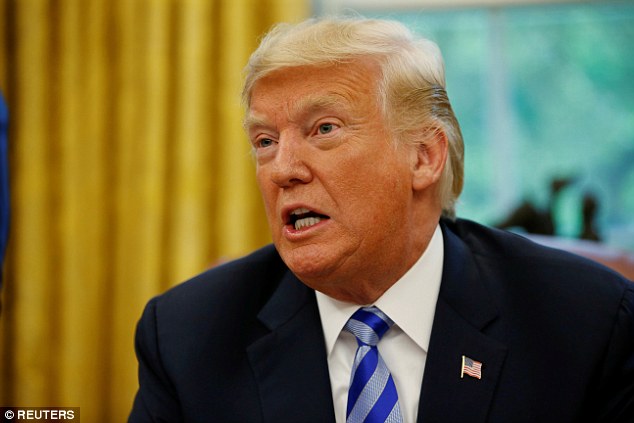 Trump speaks during a meeting with the President of FIFA Gianni Infantino in the Oval Office at the White House in Washington, D.C. on Monday

First, at 9.16pm he referred to a bombshell report from the Daily Caller claiming that China had access to Hillary Clinton’s notorious private email server while she was secretary of state.

‘Are they sure it wasn’t Russia (just kidding!)?’ Trump joked. ‘What are the odds that the FBI and DOJ are right on top of this? Actually, a very big story. Much classified information!’

The President then turned to the lighter topic of sports. ‘Add the 2026 World Cup to our long list of accomplishments!’ he wrote, referring to the recent decision for the U.S., Canada and Mexico to jointly host the tournament. 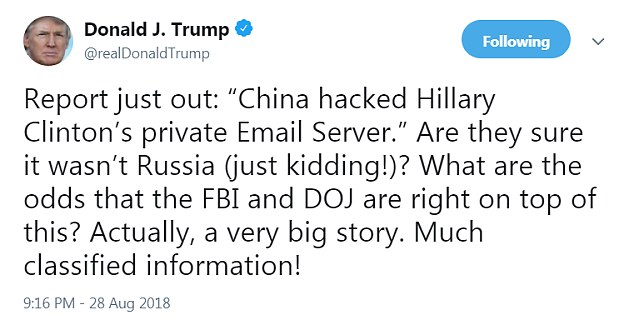 Earlier on Tuesday, Trump had hosted Gianni Infantino, the 48-year-old Swiss-Italian president of FIFA, and U.S. Soccer President Carlos Cordeiro in the Oval Office to celebrate the decision.

Next Trump turned to trade. ‘Our new Trade Deal with Mexico focuses on FARMERS, GROWTH for our country, tearing down TRADE BARRIERS, JOBS and having companies continue to POUR BACK INTO OUR COUNTRY. It will be a big hit!’ he tweeted.

The U.S. and Mexico agreed on Monday to overhaul NAFTA, pressuring Canada to agree to new auto trade and dispute settlement rules to remain part of the three-nation pact.

At 10.26pm, Trump celebrated his recent decision to revoke the security clearance of former CIA chief John Brennan, who now works as a contributor for MSNBC and NBC News.

‘New Poll – A majority of Americans think that John Brennan and James Comey should have their Security Clearances Revoked. Not surprised!,’ Trump tweeted.

The White House revoked Brennan’s clearance earlier this month. Comey, whom Trump fired as FBI director in May of 2017, currently retains his clearance.

After midnight, Trump returned to the subject of Clinton’s emails.

‘Hillary Clinton’s Emails, many of which are Classified Information, got hacked by China. Next move better be by the FBI & DOJ or, after all of their other missteps (Comey, McCabe, Strzok, Page, Ohr, FISA, Dirty Dossier etc.), their credibility will be forever gone!’