President Donald Trump accused Democrats of playing presidential politics with their rejection of his offer to end the government shutdown and he attacked Speaker Nancy Pelosi of being too ‘petrified’ of the liberals in her party to make a deal.

The president indicated his upcoming reelection bid is on his mind Sunday morning with a series of early morning tweets attacking the left while reassuring his base that amnesty for illegals is not on the table.

‘Nancy Pelosi and some of the Democrats turned down my offer yesterday before I even got up to speak. They don’t see crime & drugs, they only see 2020 – which they are not going to win. Best economy! They should do the right thing for the Country & allow people to go back to work,’ he wrote. 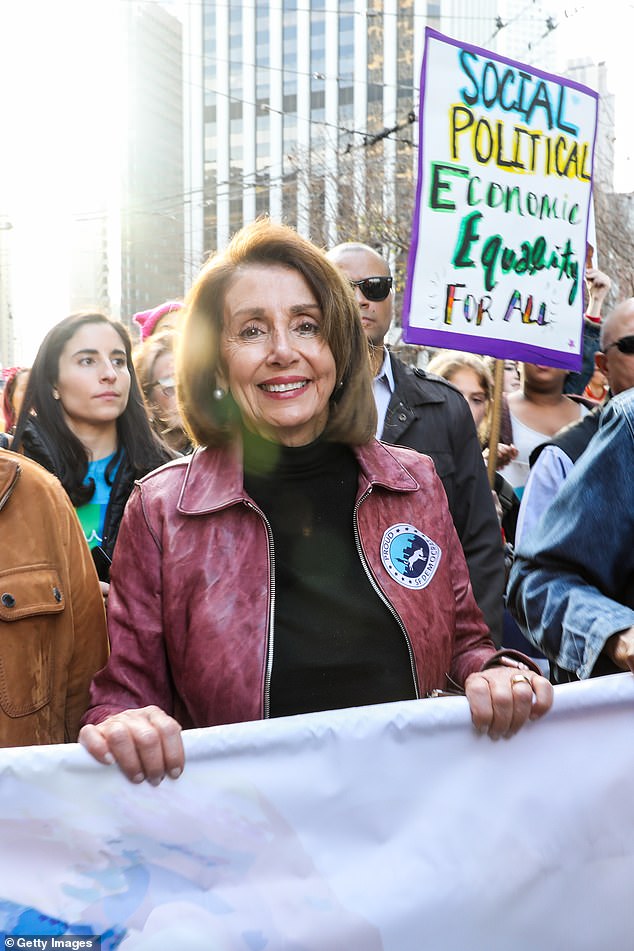 Trump accused Speaker Nancy Pelosi, seen here walking in the Women’s March in San Francisco, of being too ‘petrified’ of the liberals in her party to make a deal 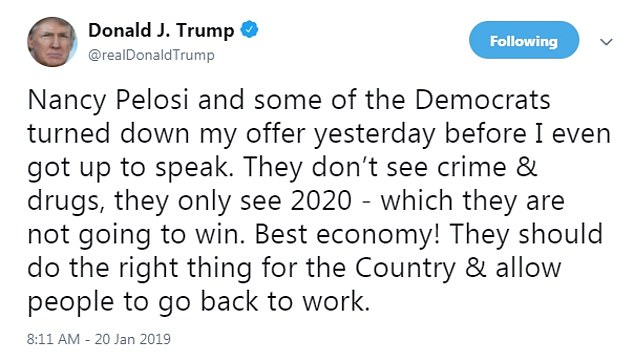 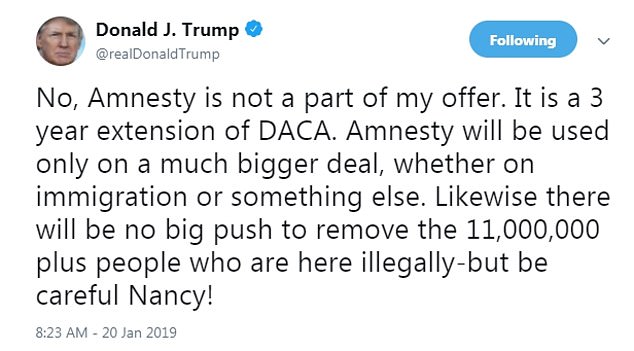 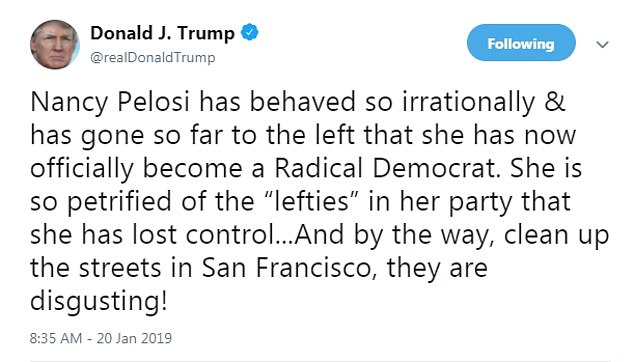 He also pushed back against conservatives who complained his deal gave illegal immigrants a get-out-of-jail free card.

‘No, Amnesty is not a part of my offer. It is a 3 year extension of DACA. Amnesty will be used only on a much bigger deal, whether on immigration or something else. Likewise there will be no big push to remove the 11,000,000 plus people who are here illegally-but be careful Nancy!,’ he added.

And he got in one last jab at Speaker Nancy Pelosi and the city she represents – San Francisco, a symbol of liberalism.

‘Nancy Pelosi has behaved so irrationally & has gone so far to the left that she has now officially become a Radical Democrat. She is so petrified of the ‘lefties’ in her party that she has lost control…And by the way, clean up the streets in San Francisco, they are disgusting!,’ he wrote.

Democratic congressional leaders on Saturday dismissed Trump’s offer even before he made his remarks at the White House, rejecting it based off news reports’ of what he was going to propose to end the 30-day partial government shutdown.

‘Democrats were hopeful that the President was finally willing to re-open government and proceed with a much-needed discussion to protect the border,’ Speaker Nancy Pelosi said in a statement.

She claimed Trump’s offer is a ‘non-starter’ that would not pass the House.

‘This proposal does not include the permanent solution for the Dreamers and TPS recipients that our country needs and supports,’ she added.

House Democrats plan to offer a set of six appropriation bills next week to fund the government.

‘100 miles of border wall in exchange for amnestying millions of illegals. So if we grant citizenship to a BILLION foreigners, maybe we can finally get a full border wall,’ she added. 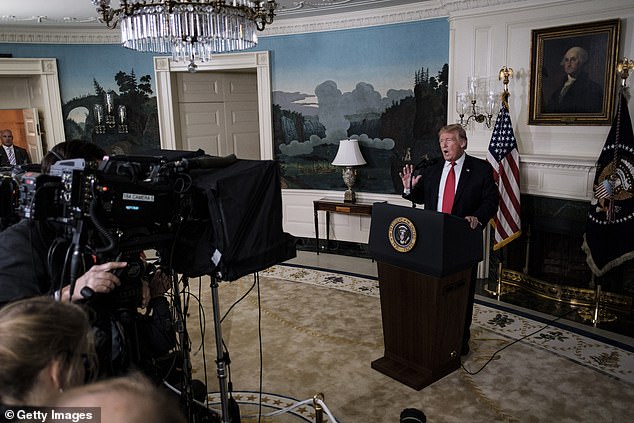 The president offered Democrats in Congress an immigration reform package on January 19, including some items from their wish-list.

In exchange, he wants money to continue construction of a border wall that he has promised consistently since early 2015. 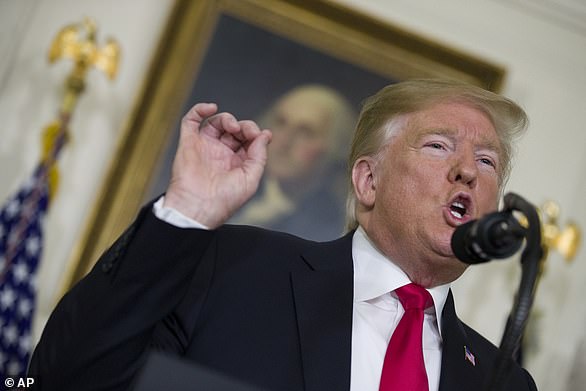 James Carafano, a national security expert at the Trump-supporting Heritage Foundation, said in a statement Saturday, that Trump ‘should be applauded’ for pursuing an end to the government shutdown and better border security.

‘However, including amnesty in the new proposal is not the way to do it. Amnesty encourages further illegal immigration, incentivizes the tragedy of human trafficking, and undermines our citizens’ confidence in the rule of law,’ he argued.

It was the complaints of Coulter, Rush Limbaugh and other prominent voices on the right that prompted Trump’s demand for full funding for his border wall in any appropriations bill funding the government.

Democrats rejected that request leading to the partial government shutdown that began on Dec. 22.

Trump spent much of Sunday morning tweeting about his wall, the deal he offered Democrats, and claimed Hispanics support his work.

‘Don’t forget, we are building and renovating big sections of Wall right now. Moving quickly, and will cost far less than previous politicians thought possible. Building, after all, is what I do best, even when money is not readily available!,’ he wrote.

‘Wow, just heard that my poll numbers with Hispanics has gone up 19%, to 50%. That is because they know the Border issue better than anyone, and they want Security, which can only be gotten with a Wall,’ he noted.

An NPR/PBS/Marist poll in January showed the president with a 50 percent approval rate among Latinos.

Negotiations are now stuck between the $5.7 billion Trump wants and the $1.3 billion Democrats have offered for border security. 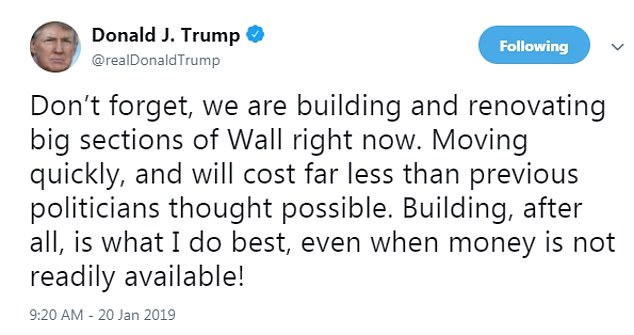 Trump spent much of Sunday morning tweeting about his wall, the deal he offered Democrats, and claimed Hispanics support his work

Trump outlined a plan to end the government shutdown on Saturday, offering congressional Democrats three years of legislative relief for 700,000 DACA recipients — including protection from deportation — and an extension of legal residence for people living in the country under ‘Temporary Protective Status’ designations.

‘It is time to reclaim our future from the extreme voices,’ he said of liberals he’s been haranguing for months over their alleged support for open borders. ”The radical left can never control our borders,’ he later said.

In a slap at Pelosi, he declared: ‘Walls are not immoral. In fact, they are the opposite of immoral.’

Trump said his compromise will provide the ‘best chance in a very long time at real bipartisan immigration reform’ in the U.S. Congress.

The president also offered $800 million in urgent humanitarian assistance and 75 new immigration teams to reduce the court backlog of 900,000 cases, which he called an ‘impossible nightmare’ in his late-afternoon remarks.

DACA refers to the Obama-era Deferred Action for Childhood Arrivals program, which offered a no-deportation guarantee to hundreds of thousands of illegal immigrants whose parents brought them into the U.S. as minors.

The Trump administration moved last year to end TPS status for Salvadorans and Hondurans, ending two decades of protected status. Both groups would gain extensions under the proposal the White House offered Saturday.

Salvadorans comprise the largest group, more than 268,000. Hondurans were offered the programs benefits after Hurricane Mitch struck the Central American country in 1998. Protection for Haitians is scheduled to end later this year.

Vice President Mike Pence told reporters on Saturday that the president is not offering ‘amnesty’ to TPS recipients or Dreamers, because their protections will end in three years, as liberals opposing the plan have complained.

‘This is not an amnesty bill,’ the former Indiana lawmaker said.