President Donald Trump on Sunday launched a twitter attack on a billionaire Democrat obsessed with impeaching him who was interviewed on CNN – the news network the president claims he never watches.

Trump, after calling for a civil tone last week after pipe bombs were mailed to his political rivals, was back on the attack Sunday, criticizing billionaire former hedge fund manager Tom Steyer, who’s considering a 2020 bid against him, as ‘wacky.’

Steyer was one of those who received such a bomb. It was discovered at a Sacramento mailing facility on Friday. 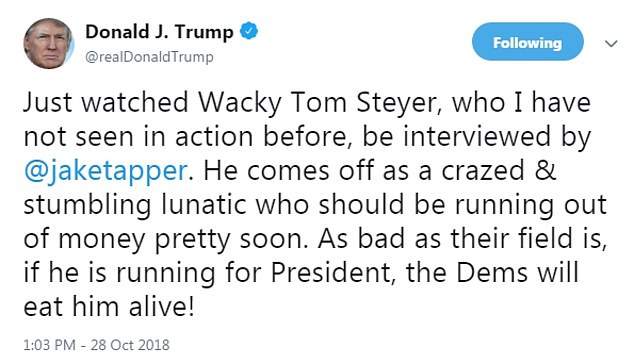 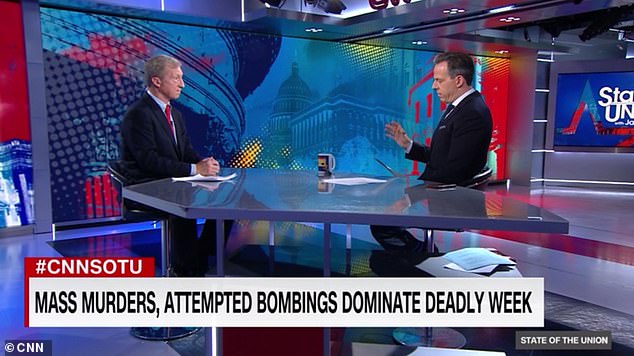 Tom Steyer was interviewed by Jake Tapper on Sunday on CNN

‘Just watched Wacky Tom Steyer, who I have not seen in action before, be interviewed by @jaketapper. He comes off as a crazed & stumbling lunatic who should be running out of money pretty soon. As bad as their field is, if he is running for President, the Dems will eat him alive!,’ Trump tweeted on Sunday afternoon.

Steyer is a major Democrat donor who is pushing the party to launch impeachment proceedings against the president should they retake control of the House of Representatives in the midterms.

He was the target of one of the pipe bombs sent out last week. At least 14 packages containing pipe bombs were sent to Democratic Party leaders including former President Barack Obama, former Vice President Joe Biden and Trump’s 2016 election opponent, Hillary Clinton.

And while Steyer told CNN’s Jake Tapper on Sunday there is no direct link between Trump and the alleged bomber Cesar Sayoc, who is a Trump supporter, he did say the president has created an atmosphere makes violence possible.

‘There’s obviously no direct link, Jake. But I am associating and blaming him for creating the atmosphere that exists. The reason I started and have been running an impeachment petition drive is because, in my opinion, he is corrupt and lawless and dangerous. And that the result of that is to change America to attack the rule of law, and it’s important to step up and oppose that kind of behavior and atmosphere directly,’ Steyer said on CNN’s “State of the Union.”

He also charged the president with breaking the law and engaging in ‘violent political rhetoric.’

‘There’s something much bigger than that going on here, which is the atmosphere that he’s created and that the Republican party has created in terms of political violence. I think if you look across the political scene, what you see is routine, systematic lawlessness. An attempt to break small D democratic norms in pursuit of victory at all costs. We see it in voter suppression. We see it in extreme gerrymandering. We see it in the violent political rhetoric that people have been alluding to all morning. But more than that, we see it in a president who has been breaking the law as a candidate, as a business person, and as a president,’ Steyer said.

Trump has claimed repeatedly he no longer watches CNN because it is ‘fake news.’

In October 2017, Steyer spent around $10 million for a television ad campaign advocating for Trump’s impeachment and founded the group: Need to Impeach.

And he sank at least $110 million in the midterm elections, making him the biggest investor on the left in campaign cash.

Steyer founded Farallon Capital and made his fortunes through the hedge fund, which was managing $20 billion by the time he left the company in October 2012 to work on clean energy issues.

His wealth and political involvement has stirred up talk he may make his own bid for public office: such as a 2020 presidential challenge.

Adding to the talk, Steyer was in New Hampshire in July arguing for Trump’s impeachment.

He argues Trump has violated the emoluments clause of the Constitution and has obstructed justice. 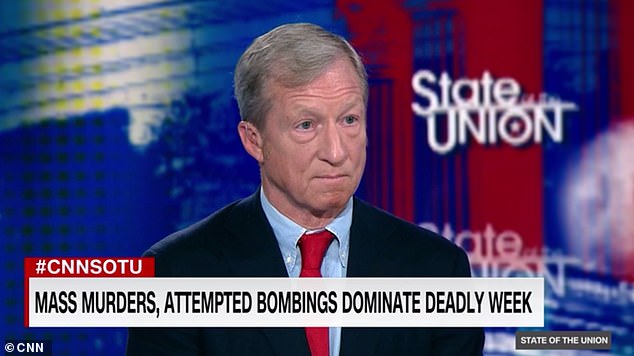 Steyer has sunk $110 million into the midterm election 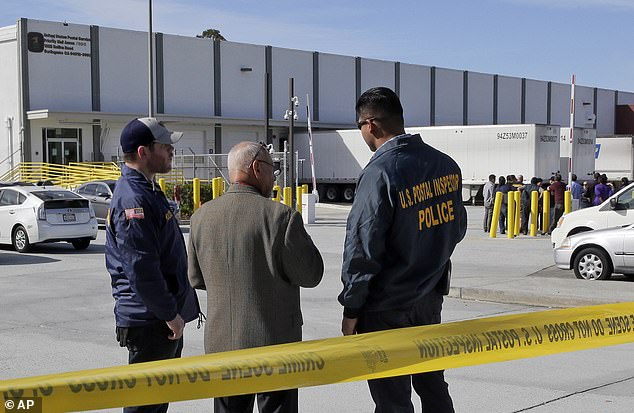 Postal inspectors confer outside of a postal facility in Burlingame, Calif., on Friday, after they seized a suspicious package addressed to billionaire political activist Tom Steyer

President Trump called for a ‘civil tone’ in politics at a campaign rally in Mosinee, Wisconsin, on Wednesday evening in the wake of the bombing attempts.

The president, who often engages in provocative language and uses derogatory names against his political opponents, carefully tempered his words before the cheering crowd and repeatedly pointed out his own affable behavior, saying he was being ‘nice.’

‘And by the way, do you see how nice I’m behaving tonight?’ Trump asked the crowd. ‘Have you ever seen this? We’re all behaving very well.’