Trump back to boasting about crowd sizes as he blasts NY Times for saying only 1,000 came to see him

President Donald Trump returned Wednesday to his years-long fixation on the size of his live audiences, erupting on Twitter at a newspaper that underestimated how many people came to hear him speak the night before.

The New York Times reported that his campaign-style Tennessee rally was sparsely attended, drawing only about 1,000 people. The fire marshal’s official head-count was 5,500, a number that the paper later used in correcting the story.

The president has vented repeatedly at reporters who err on the side of caution when reporting his crowd sizes, saying they intentionally underestimate his broad appeal.

‘The Failing and Corrupt @nytimes estimated the crowd last night at “1000 people,” when in fact it was many times that number – and the arena was rockin’,’ the president tweeted.

President Donald Trump spoke to 5,500 people Tuesday night in Nashville, Tennessee – a number barely half of the auditorium’s capacity – leading to the latest in a long series of squabbles over how large and loyal his base of support is

‘This is the way they demean and disparage. They are very dishonest people who don’t “get” me, and never did!’

The Times reported that Trump ‘worked his audience of about 1,000 into a frenzy’ by restating his belief that members of the ultra-violent MS-13 drug gang are ‘animals’ rather than human beings.

Trump has repeatedly branded the Times, whose readership and subscription numbers have reportedly soared during his time in office, as ‘failing.’

The Nashville Municipal Auditorium’s capacity is 9,600 people when the floor area is made available for standing room as it was Tuesday night, meaning about 57 per cent of the space was taken. 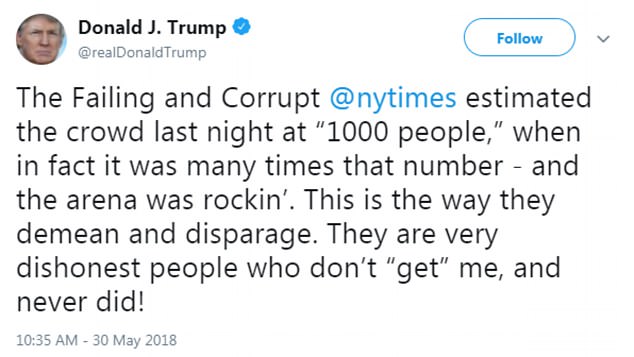 Trump blasted The New York Times for reporting that ‘1,000 people’ attended; a spokesman for the Nashville Fire Marshal told DailyMail.com that the real number was about 5,500

As Trump spoke Tuesday night, large areas were blocked off behind the stage – and some ofthe available upper-level seating bowl areas were left empty

Video shot as the president entered suggests that while the upper reaches of the seating bowl included some empty sections, the floor of the arena was mostly full.

Squabbling over he-said, she-said accounts of the depth of Trump’s popular appeal is a longtime fascination for the 45th U.S. president.

Last December the president wrested an apology from a Washington Post scribe who had tweeted a half-empty arena photo and described it as a picture of the crowd listening to the president speak in Pensacola.

It turned out the picture was shot an hour before he arrived.

But pictures have deceived in the other direction as well, including one instance during a 2016 campaign rally in Arkansas. 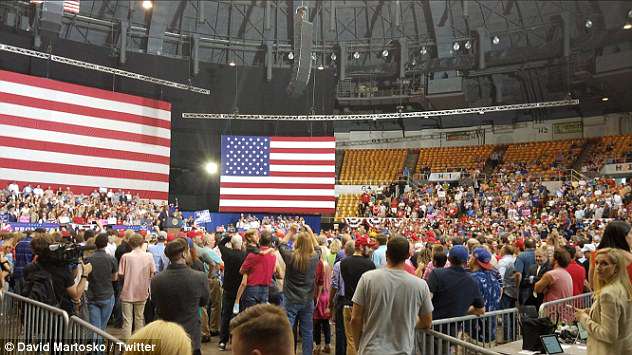 As Trump spoke Tuesday night, large areas were blocked off behind the stage – and some ofthe available upper-level seating bowl areas were left empty

After Trump declared from the podium that his audience had broken an attendance record set years earlier by ZZ Top, and sent out a man he claimed was the fire marshal to confirm it, DailyMail.com published photos showing ample empty space and a half-capacity crowd.

The ‘fire marshal’ turned out to be a building facilities manager at the Arkansas State Fairgrounds in Little Rock, who accepted the Trump campaign’s crowd-size claim without questioning it.

After DailyMail.com asked a Times spokesperson whether its crowd-count number was a typographical error, the paper corrected its story.

‘An earlier version of this article cited an incorrect figure for the number of people attending President Trump’s rally,’ the editor’s notice read.

‘While no exact figure is available, the fire marshal’s office estimated that approximately 5,500 people attended the rally, not about 1,000 people.’