The remarks came amid a blizzard of tweets and retweets Trump issued on Saturday morning from the White House, where he is spending the weekend with no public events scheduled.

In one tweet, Trump slammed McCabe, a key figure in both the investigation into Hillary Clinton’s handling of classified material as well as the Trump-Russia probe, who was fired by the attorney general in March 2018 for lacking ‘candor’ with internal affairs investigators.

‘Andy McCabe is a major sleazebag. Among many other things, he took massive amounts of money from Crooked Hillary reps, for wife’s campaign, while Hillary was under “investigation” by FBI!’ Trump wrote. 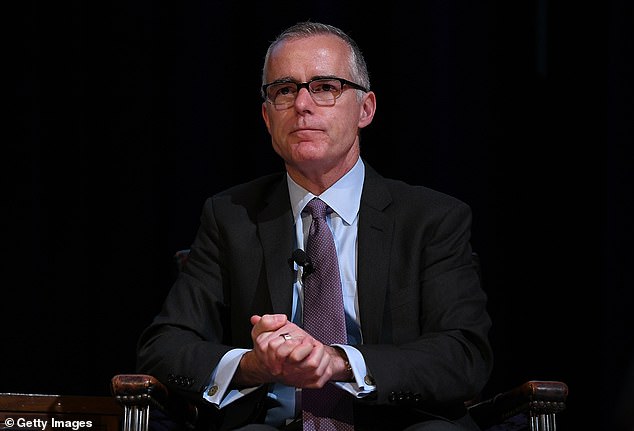 McCabe (above) was a key figure in both the investigation into Hillary Clinton’s handling of classified material as well as the Trump-Russia probe. He was fired by the attorney general in March 2018 for lacking ‘candor’ with internal affairs investigators 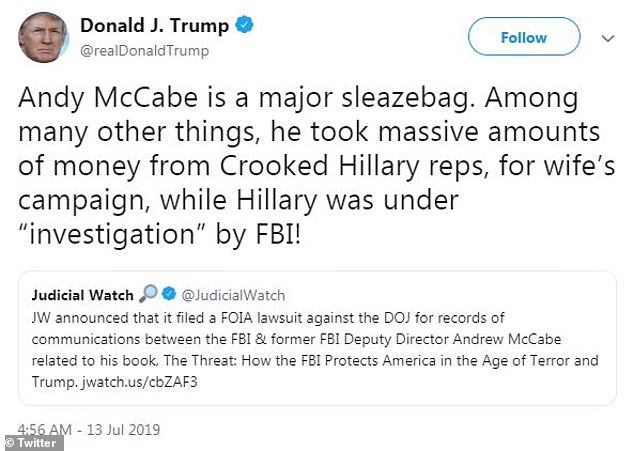 At the time, McCabe was running the FBI’s Washington DC field office, which was assisting the FBI’s investigation into Clinton’s private email server.

The tweet also cited comments from Judicial Watch, a conservative advocacy group that recently filed a Freedom of Information Act suit seeking communications between the FBI and McCabe related to book McCabe published in February.

‘McCabe played a central role in Spygate, the Deep State’s effort to spy upon and undermine President Trump,’ said Judicial Watch President Tom Fitton in a statement about the lawsuit.

‘We aim to find out if McCabe’s book was properly vetted or simply rubberstamped by anti-Trump bureaucrats before being published,’ he added.

In another tweet, Trump also slammed Robert Mueller’s handling of text messages between two high ranking FBI officials who were involved in both the Clinton investigation and the Trump-Russia probe. 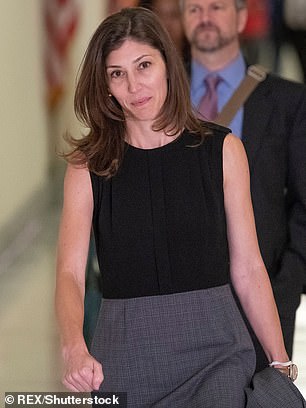 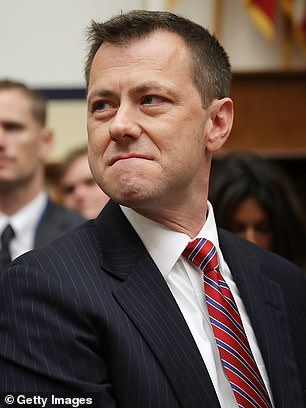 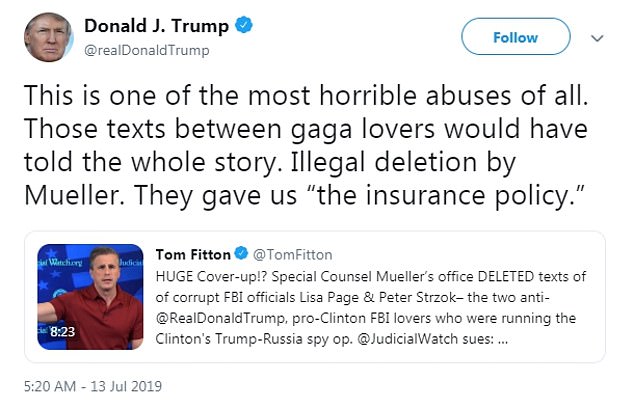 ‘FBI lovers’ Peter Strzok and Lisa Page were both ousted from the bureau after their anti-Trump text messages came to light during an investigation into the threat that they could be compromised over their extramarital affair.

However, thousands of text messages between the two were lost, allegedly because of technical issues.

‘This is one of the most horrible abuses of all. Those texts between gaga lovers would have told the whole story. Illegal deletion by Mueller. They gave us “the insurance policy,”’ Trump wrote.

One of the August 2016 texts between Strzok and Page referenced meeting McCabe to discuss an ‘insurance policy’ in the event Trump were elected.

The remark reportedly referred to the FBI’s investigation into purported collusion between the Trump campaign and Russia, which was handed off to Mueller after Trump took office.

By 9.30am on Saturday, Trump’s motorcade was rolling from the White House to an undisclosed location.

Trump often visits his golf club in Sterling, Virginia while spending the weekend in DC.