President Donald Trump went after the ‘depraved’  North Korea’s regime in his State of the Union Tuesday, and brought family members of Otto Warmbier, who died after a cruel captivity there.

Trump’s rhetoric was actually a notch down from his United Nations speech, where he famously mocked North Korean President Kim Jong-un as ‘rocket man.’

‘We need only look at the depraved character of the North Korean regime to understand the nature of the nuclear threat it could pose to America and our allies,’ Trump told lawmakers of both parties in his State of the Union speech.

Near the end of his speech, he mentioned Otto Warmbier, a University of Virginia student from Cincinnati, Ohio, who was taken captive when he took a tour there.

Applauded: Fred and Cindy Warmbier were praised by president Trump as ‘special people’ after he spoke of the loss of their son and his captivity in Kim Jong-Un’s regime 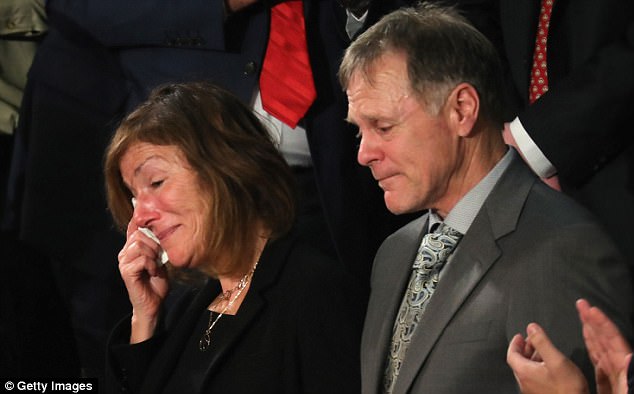 In tears: Otto Warmbier’s parents got to their feet after Trump’s tributes to their son 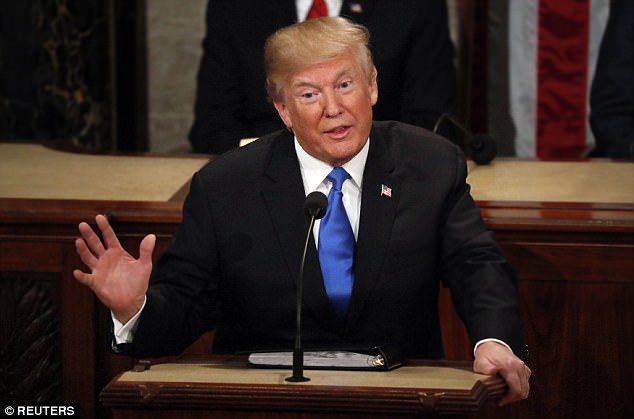 Resolve: Trump’s lengthy condemnation of the North Korean regime will be watched closely around the world 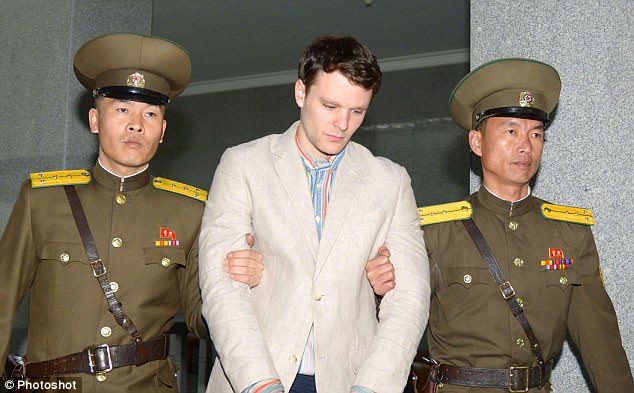 U.S. university student Otto Warmbier is taken to North Korea’s top court in Pyongyang on March 16, 2016. The court sentenced Warmbier to hard labor for 15 years. He died days after his release 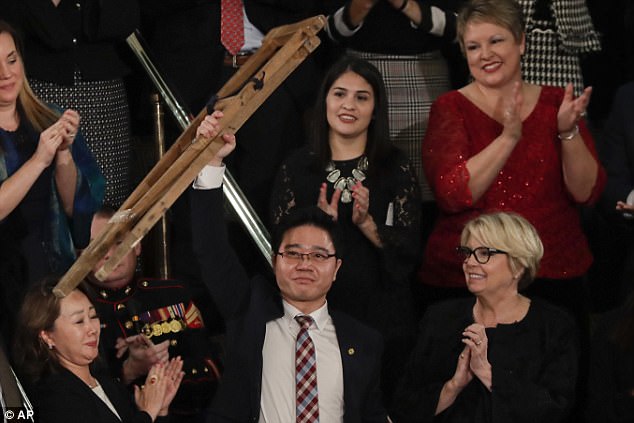 Victim: Ji Seong-ho lost a leg as, starving he tried to steal coal from a railroad car. Now a defector, he held up the crutches which he had used until he got a new leg in South Korea

‘At its conclusion, this wonderful man was arrested and charged with crimes against the state,’ Trump said.

‘After a shameful trial, the dictatorship sentenced Otto to 15 years of hard labor, before returning him to America last June – horribly injured and on the verge of death. He passed away just days after his return,’ Trump said.

They were charged with ‘hostile acts against the DPRK.’

Seated in the audience were his parents, Fred and Cindy Warmbier, who became known for their appeals for their son’s release. His brother Austin and sister Greta were also there, Trump said.

‘You are powerful witnesses to a menace that threatens our world, and your strength inspires us all.

‘Tonight, we pledge to honor Otto’s memory with American resolve,’ he said, and then, departing from his text, added as the Warmbiers stood up to a lengthy ovation: ‘Special people.’

Then he turned to another guest, who had not been announced in advance – Ji Seong-ho, a defector from Kim Jong-Un’s regime.

‘Finally, we are joined by one more witness to the ominous nature of this regime. His name is Mr. Ji Seong-ho,’ he said.

‘In 1996, Seong-ho was a starving boy in North Korea. One day, he tried to steal coal from a railroad car to barter for a few scraps of food.

‘In the process, he passed out on the train tracks, exhausted from hunger. He woke up as a train ran over his limbs. 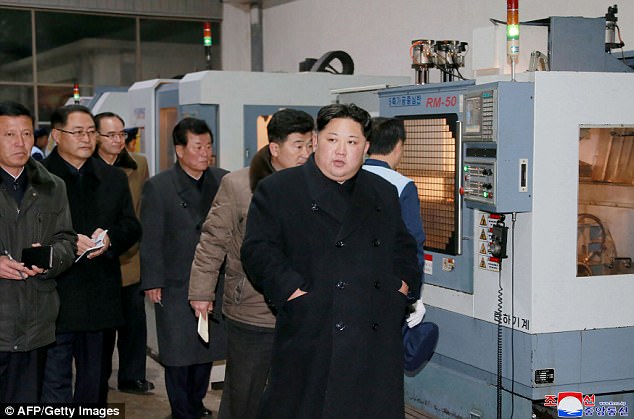 In the crosshairs: Trump made a focus on the ‘menace’ of Kim Jong-Un a key focus of his speech

‘He then endured multiple amputations without anything to dull the pain. His brother and sister gave what little food they had to help him recover and ate dirt themselves – permanently stunting their own growth.

‘Later, he was tortured by North Korean authorities after returning from a brief visit to China. His tormentors wanted to know if he had met any Christians. He had – and he resolved to be free.

‘Seong-ho traveled thousands of miles on crutches across China and Southeast Asia to freedom. Most of his family followed. His father was caught trying to escape, and was tortured to death.

‘Today he lives in Seoul, where he rescues other defectors, and broadcasts into North Korea what the regime fears the most – the truth.

‘Today he has a new leg, but Seong-ho, I understand you still keep those crutches as a reminder of how far you have come. Your great sacrifice is an inspiration to us all.

‘Seong-ho’s story is a testament to the yearning of every human soul to live in freedom.’