Trump boasts about his ISIS victories over Obama’s

President Trump tweeted a neat little graphic Wednesday boasting that his wins against ISIS are bigger than President Obama’s.

That’s down from 35,000 ISIS fighters occupying 17,500 square miles that existed when President Trump was sworn in last January.

President Trump, seen earlier today at the headquarters of the Palm Beach Fire Rescue squad, tweeted about his victories in the ISIS fight after returning to Mar-a-Lago Wednesday night 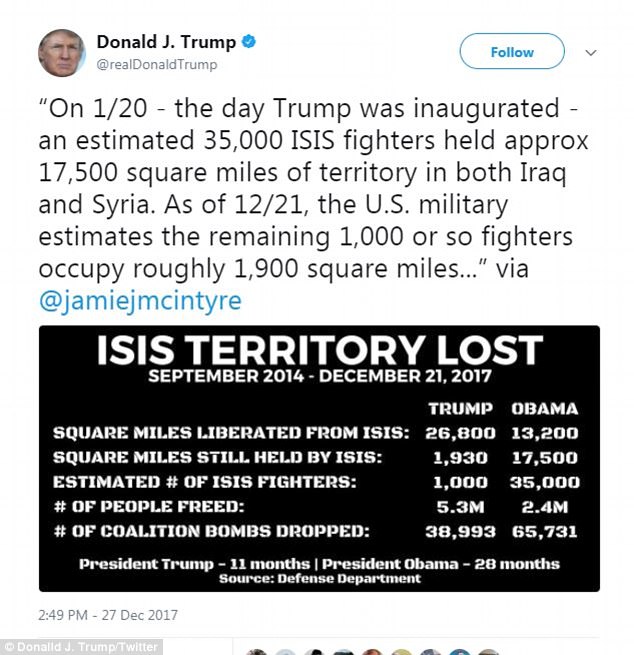 President Trump tweeted out a graphic Wednesday night that showed how much he’s accomplished in the ISIS fight, comparing his record to that of President Obama’s, using Department of Defense stats 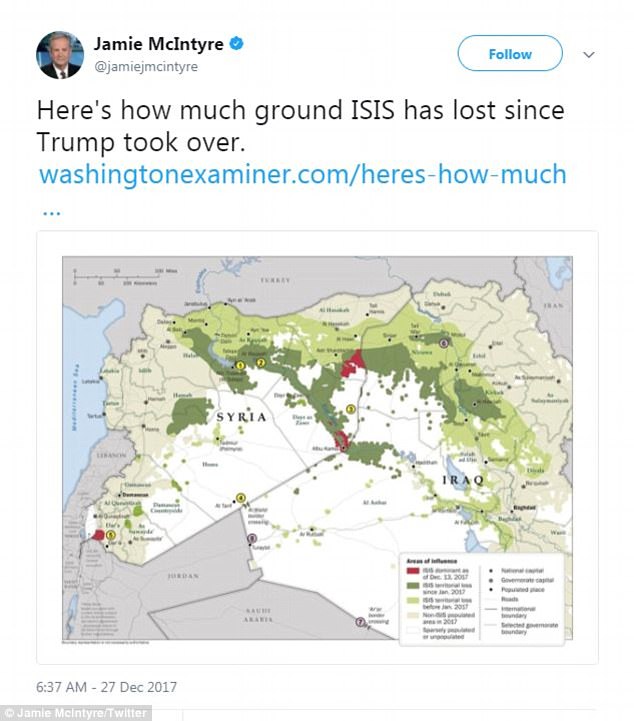 Earlier Wednesday, Washington Examiner reporter Jamie McIntyre had tweeted out his ISIS story alongside a map that showed how much territory coalition forces had gained back since President Trump took office

Earlier Wednesday, McIntyre, a well-known and respected defense reporter, had tweeted a map showing the losses of ISIS territory during President Trump’s 11-plus months in office.

He linked that to his report from earlier this week which had noted that the defeat of ISIS in Syria and Iraq ‘rapidly accelerated’ under Trump.

‘The campaign liberated twice as many people and twice as much territory as in the previous 28 months under President Barack Obama, according to Defense Department figures,’ McIntyre wrote.

In the tweet, the president quoted McIntyre’s next paragraph that said: ‘On Jan. 20 — the day Trump was inaugurated — an estimated 35,000 ISIS fighters held approximately 17,500 square miles of territory in both Iraq and Syria. As of 12/21, the U.S. military estimates the remaining 1,000 or so fighters occupy roughly 1,900 square miles…’

The tipping point against ISIS, McIntyre wrote, came when Mosul, a city in northern Iraq, was liberated earlier this year.

‘The liberation of Mosul was followed quickly with victories in Tal Afar, Hawija, and Al Qaim in Iraq in late summer and fall, and then a crushing blow as the Islamic State’s other capital, Raqqa, fell to U.S.-backed Syrian fighters,’ the Washington Examiner reporter wrote.

It was President Obama’s strategy to work ‘by, with and through’ partner forces, but U.S. commanders talking to the Examiner suggested it was Trump and his Defense Secretary Jim Mattis’ strategy of getting rid of easing the engagement rules that helped rout the terror group.

While the regulations under Obama felt like micro-management to some, others suggest the easing of engagement rules lead to more civilian deaths.

The military has countered media reports, that suggest civilian deaths in Iraq are much higher than counted and that air strikes under Trump have been less precise, by noting how ISIS is predominantly responsible for civilians killed in these countries.

‘I say this with full conviction: The responsibility for civilian casualties in Iraq and Syria lies with ISIS, who have brought misery and death to this region,’ Towsend told McIntyre.