President Donald Trump tweeted out unrestrained praise of himself Wednesday by a conservative radio host who said Israeli Jews revere him ‘like he is the second coming of God.’

The president blasted out the praise of him just hours after he set off a furor by saying any American Jews who vote for Democrats are ‘disloyal’ – drawing howls of protest from Jewish groups who said the comments resurrected ‘dual loyalty’ tropes.

“Thank you to Wayne Allyn Root for the very nice words,’ Trump began, quoting the author and host who has promoted conspiracies about President Barack Obama and other topics. 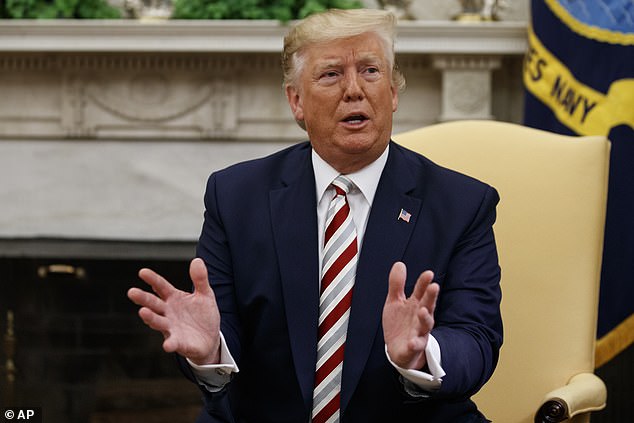 Donald Trump sparked fury on Tuesday when he said Jewish voters were disloyal if they voted Democrat. On Wednesday he quoted conservative conspiracy theorist Wayne Allyn Root who said Israeli Jews revere him like he is the ‘second coming of God’ 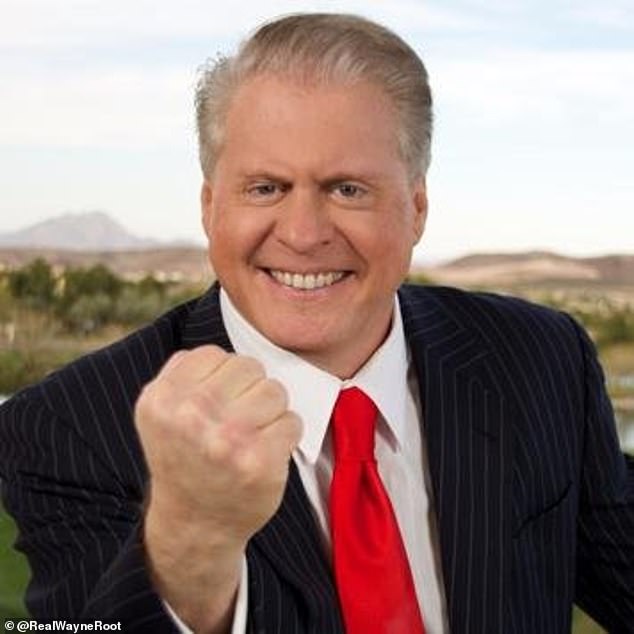 ‘They love him like he is the second coming of God…But American Jews don’t know him or like him. They don’t even know what they’re doing or saying anymore. It makes no sense! But that’s OK, if he keeps doing what he’s doing, he’s good for…all Jews, Blacks, Gays, everyone. And importantly, he’s good for everyone in America who wants a job,’ Trump continued, quoting Root.

Then the president added: ‘Wow!,’ and attached the Twitter handles of favorite outlets NewsMax, Fox and Friends, and OANN.

Trump blasted out the praise after critics decried the president for weaponizing anti-Semitism and exercising the offensive trope that questions the loyalty of Jewish citizens.

His heated tirade questioning Jewish Democrats comes as an attack on liberal ‘Squad’ members Reps. Rashida Tlaib and Ilhan Omar after they were barred from entering Israel for their outspoken support of boycotts against the nation and support of Palestine.

In his heated Oval Office remarks Tuesday, Trump said: ‘I think any Jewish people that vote for a Democrat, I think it shows either a total lack of knowledge or a great disloyalty.’ 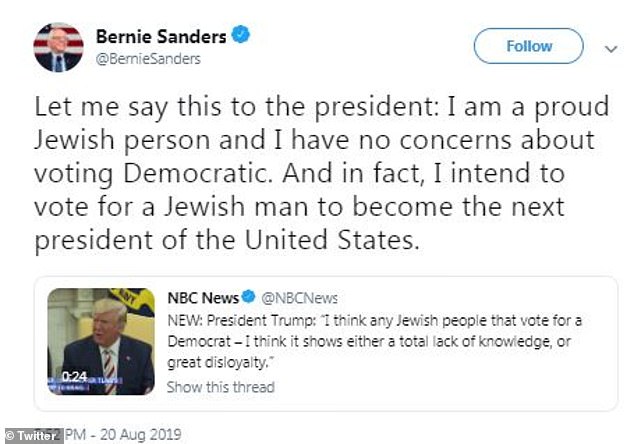 Sanders said: ‘I am a proud Jewish Person…in fact, I intend to vote for a Jewish man to become the next president of the United States’ 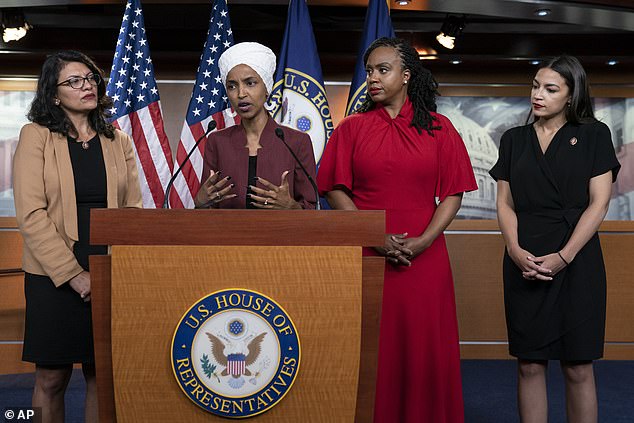 ‘Where has the Democratic Party gone? Where have they gone where they are defending these two people over the state of Israel?,’ Trump said bashing ‘Squad’ members Reps. Ilhan Omar and Rashida Tlaib, pictured above with their peers Ayanna Pressley and Alexandria Ocasio-Cortez 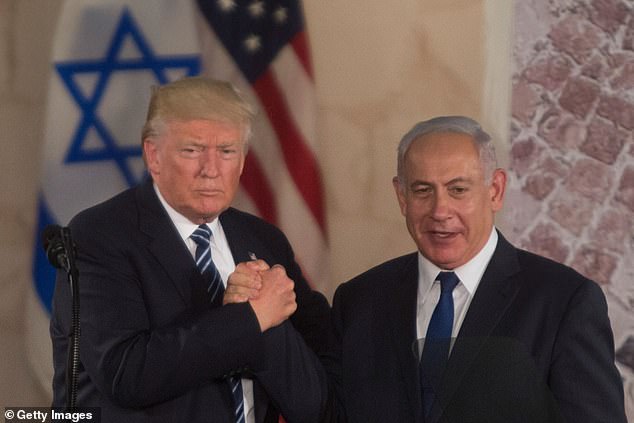 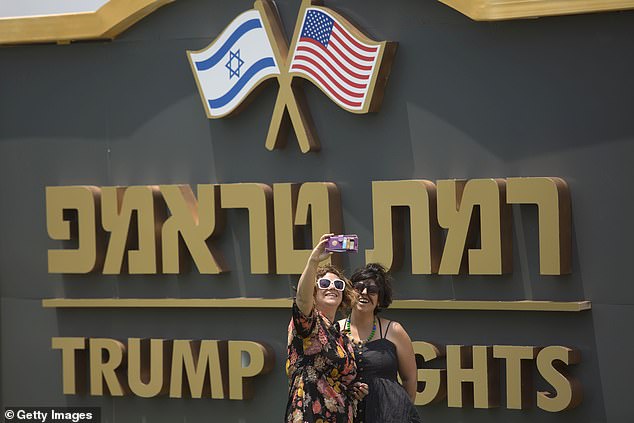 Israeli women visit a sign for a new settlement named after US President Donald Trump on June 17, 2019 in Golan Heights, Israel. The Israeli government named the new settlement ‘Trump Heights’ to honor Trump’s decision to recognize sovereignty over the Golan Heights. (Photo by Amir Levy/Getty Images)

‘Five years ago, the concept of even talking about this – even three years ago – of cutting off aid to Israel because of two people that hate Israel and hate Jewish people – I can’t believe we’re even having this conversation.’

‘Where has the Democratic Party gone? Where have they gone where they are defending these two people over the state of Israel?’ he added, alluding that Jewish people who vote for Democrats are anti-Israel.

Trump has also called squad members the ‘face’ of the Democratic party.

Many evangelical Christians have embraced the idea that the return of Jews to the biblical land of Israel is in keeping with a Biblical prophecy and signals the second coming of Jesus Christ.

Jews are monotheists who don’t believe in the second coming, which is described in the New Testament, not the Hebrew bible.

Root has backed numerous conspiracy theories, including one previously pushed by Trump that Obama wasn’t born in the United States, and a conspiracy theory that the murder of former Democratic staffer Seth Rich was orchestrated by Democrats during the campaign.

On Tuesday night, an outraged Sen. Bernie Sanders, who is Jewish and is running for president on the Democratic ticket, slammed the president for his remarks while speaking at a rally in Sioux Falls. Iowa.

‘Let me say this to the President. I am a proud Jewish person and I have no concerns about voting Democratic and in fact I intend to vote for a Jewish man to become the next president of the United States,’ Sanders said to uproarious applause.

‘It’s unclear who @POTUS is claiming Jews would be ‘disloyal’ to, but charges of disloyalty have long been used to attack Jews. As we’ve said before, it’s possible to engage in the democratic process without these claims. It’s long overdue to stop using Jews as a political football,’ Anti-Defamation League CEO Jonathan Greenblatt tweeted Tuesday evening.

‘Yet another example of @realDonaldTrump continuing to weaponize and politicize anti-Semitism. At a time when anti-Semitic incidents have increased – due to the president’s emboldening of white nationalism – Trump is repeating an anti-Semitic trope,’ Halie Soifer, executive director of the Jewish Democratic Council of America, tweeted Tuesday.

‘Trump needs a reality check. We live in a democracy, and Jewish support for the Republican Party has been halved in the past four years,’ she added. 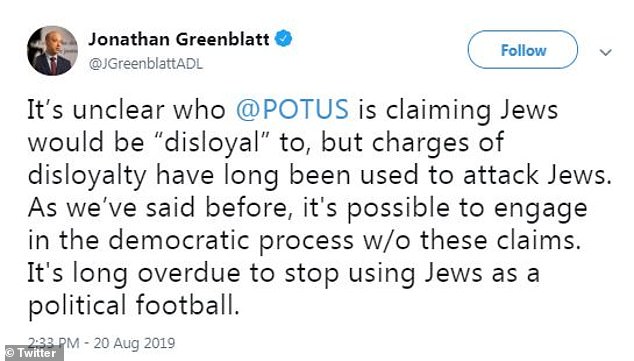 Jewish leaders flocked to Twitter to condemn the president for his statements, accusing him of weaponizing the anti-Semitic trope of Jewish disloyalty. Anti-Defamation League CEO Jonathan Greenblatt said ‘it’s long overdue to stop using Jews as a political football’ 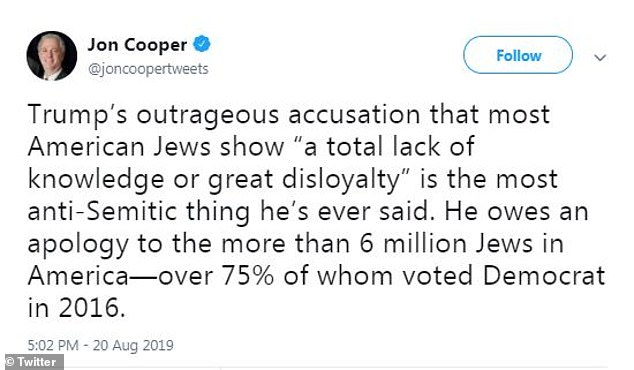 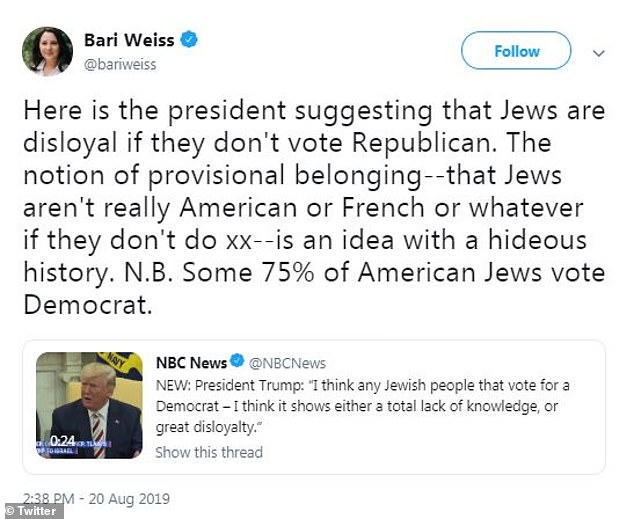 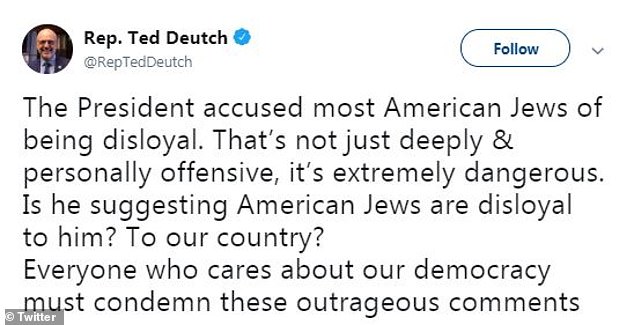 Rep. Ted Deutch of Pennsylvania, who is Jewish, said that Trump’s comments are ‘extremely dangerous’ and ‘personally offensive’ 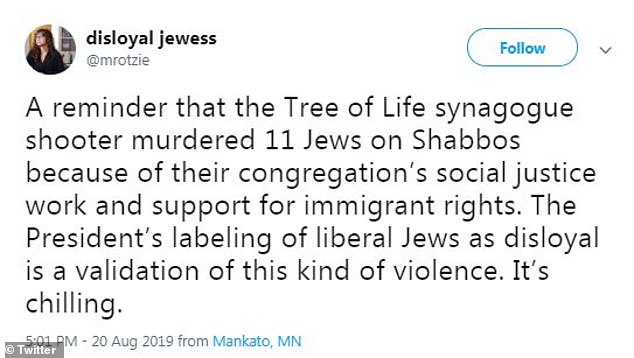 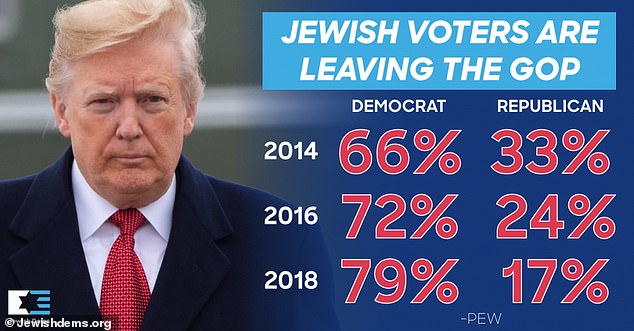 ‘A reminder that the Tree of Life synagogue shooter murdered 11 Jews on Shabbos because of their congregation’s social justice work and support for immigrant rights. the President’s labeling of liberal Jews as disloyal is a validation of this kind of violence. It’s chilling,’ one Twitter user said.

On the flip side, the Republican Jewish Coalition defended Trump’s statement on Tuesday.

‘President Trump is right, it shows a great deal of disloyalty to oneself to defend a party that protects/emboldens people that hate you for your religion,’ the group said.

Trump’s comments sparked outrage within the Jewish community, even though his own daughter Ivanka, son-in-law Jared Kushner, and their children are Jewish.

The president’s remarks saying that Jewish Americans should vote Republican, contradict facts that show that Democrats have secured the Jewish vote overwhelmingly in the past elections. 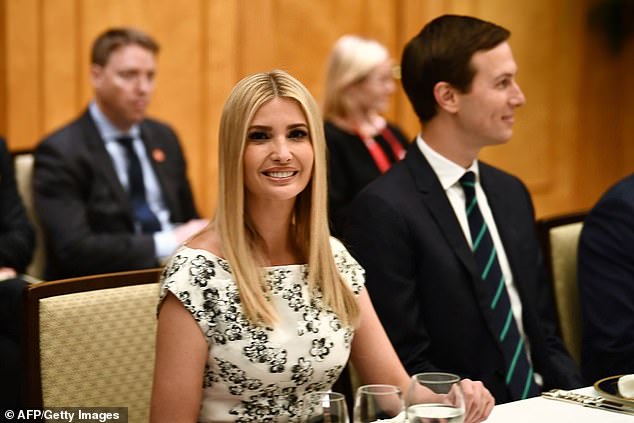 Trump’s daughter Ivanka, son-in-law Jared Kushner (both above), their children are Jewish

Trump has previously suggested that Jewish Americans have a dual loyalty to the US and Israel. When speaking to the Republican Jewish Coalition in April he said Benjamin Netanyahu was ‘your prime minister’.