As President Donald Trump left Washington Friday afternoon for his private Mar-a-Lago resort in Florida, preparations were underway down the street for the ‘March For Our Lives’ gun control event.

Trump couldn’t resist tweeting a boastful message on his way out of the White House, saying his administration had effectively banned bump stocks – trigger devices that turn ordinary rifles into rapid-fire weapons akin to machine guns.

And he made a dubious claim that his predecessor had made bump stocks legal to sell and own.

‘As I promised, today the Department of Justice will issue the rule banning BUMP STOCKS with a mandated comment period. We will BAN all devices that turn legal weapons into illegal machine guns.’

The Justice Department said Friday that it would reclassify bump stocks like the one seen above (at left) so they will fall under the same category as machine guns, which have been essentially illegal for civilians to buy since 1968 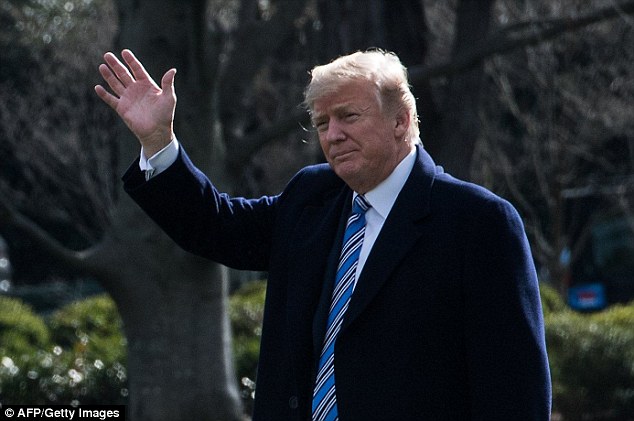 President Donald Trump boasted Friday that his government was poised to outlaw bump stocks, and claimed his predecessor had mad the deadly rifle accessories legal 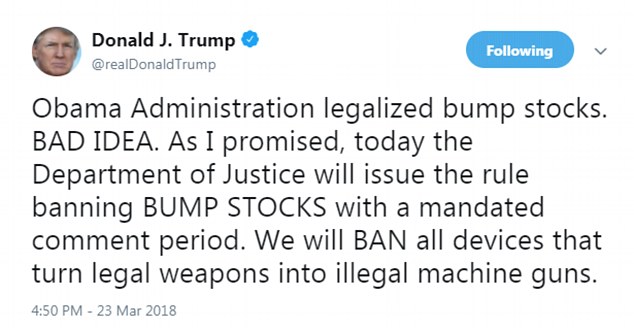 ‘We will BAN all devices that turn legal weapons into illegal machine guns,’ Trump tweeted 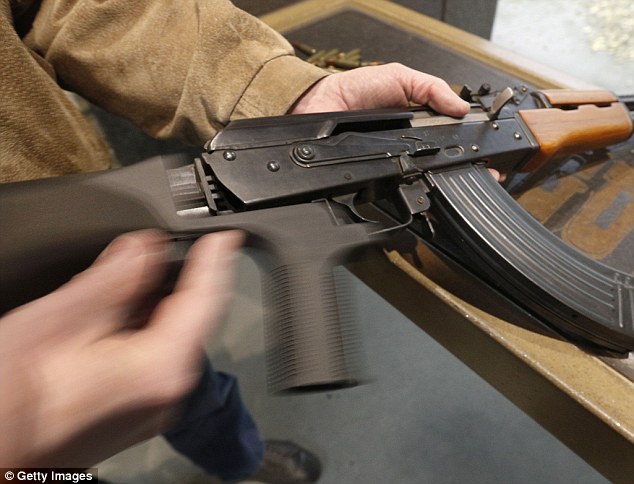 Bump stocks like this one shown on an AK-47 rifle essentially grip the rear end of a semi-automatic long gun, allowing a shooter to hold down the trigger and rely on the gun’s recoil to establish rapid firing

Bump stocks were already being sold in the U.S. when Barack Obama became president in January 2009.

His Bureau of Alcohol, Tobacco, Firearms and Explosives ruled in 2010, however, that their legal authority didn’t extend far enough to regulate them since they don’t physically alter the firing mechanism of rifles.

Instead, the agency decided, bump stocks are mere ‘firearm parts.’

Trump’s ATF made the same determination last year following a massacre in Las Vegas where the shooter used a bump stock to maximize his rate of deadly gunfire.

The agency urged Congress to write a law to ban them instead, a dicey proposition that would require the assent of the powerful National Rifle Association in order to attract Republican votes. 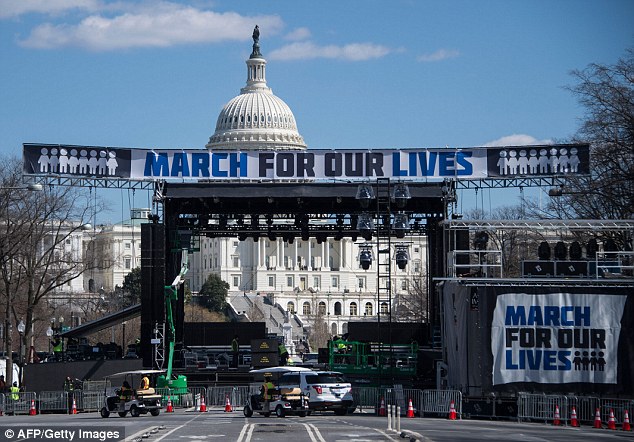 The Trump administration’s action on bump stocks came the day before gun control activists were scheduled to descend on Washington, D.C. for an anti-firearms march 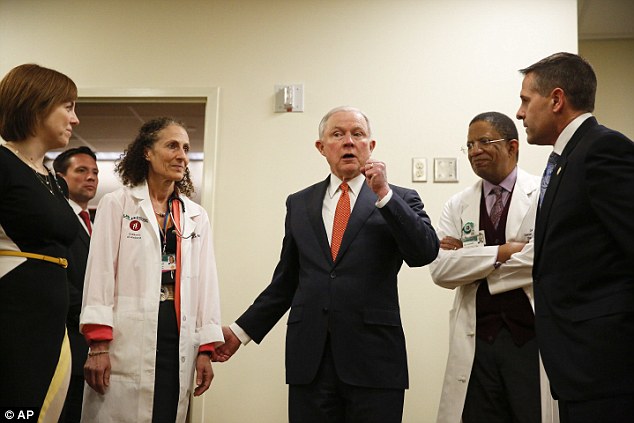 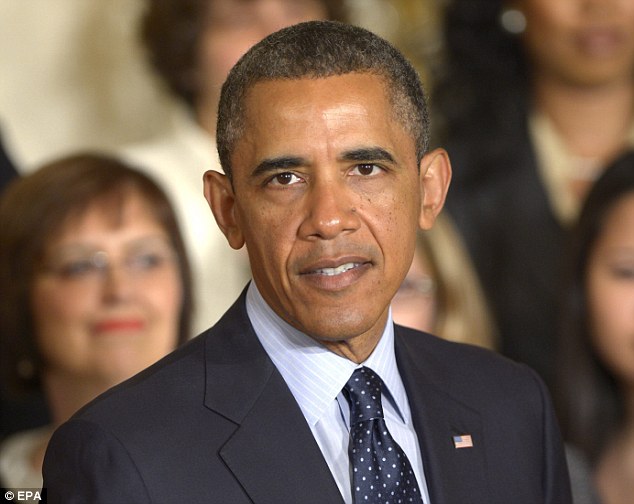 President Barack Obama’s administration didn’t legalize bump stocks, which were already being sold prior to his inauguration, but his ATF did decide it lacked the legal authority to regulate them

The group sees ATF regulations as an acceptable compromise, an NRA insider told DailyMail.com on Friday, since it would be easier to reverse in the future than a federal statute.

But on Friday afternoon Attorney General Jeff Sessions announced that the Justice Department planned to reclassify bump stocks as ‘machineguns’ on its own, lumping them in with other devices that ‘harness recoil energy to facilitate the continuous operation of a semiautomatic long gun after a single pull of the trigger.’ 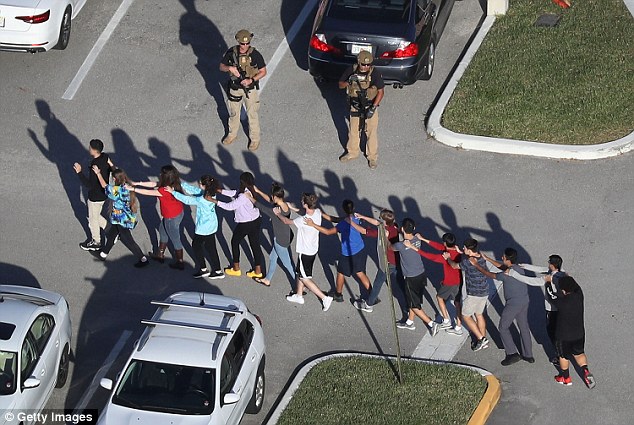 People are led out of Marjory Stoneman Douglas High School, the site of a mass shooting, on February 15, 2018 in Parkland, Florida 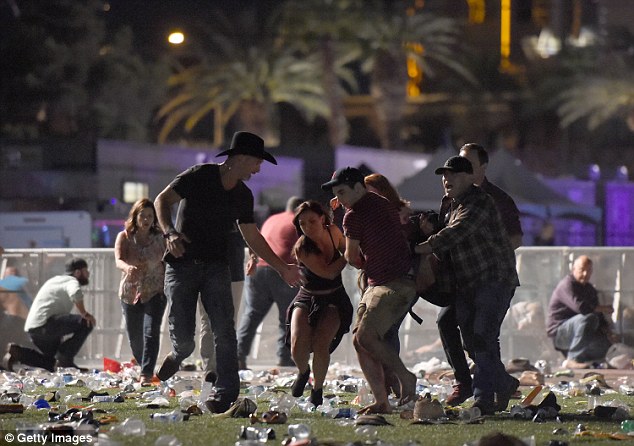 Good Samaritans carry a person at the Route 91 Harvest country music festival on October 1, 2017 in Las Vegas, after a gunman opened fire from a hotel room where his weapons were augmented by a bump stock 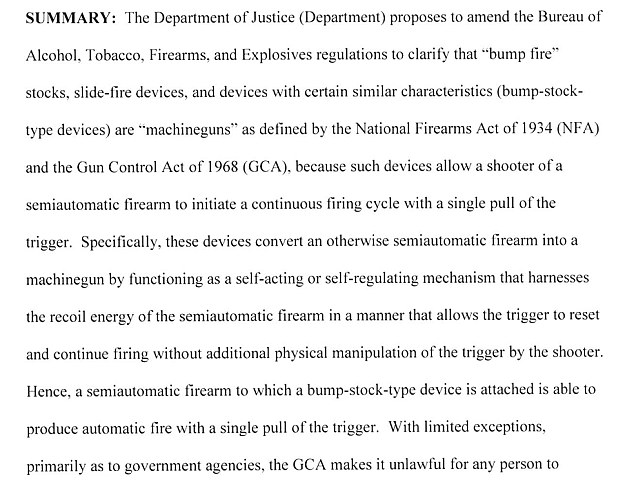 ‘A semiautomatic firearm to which a bump-stock-type device is attached is able to produce automatic fire with a single pull of the trigger,’ the Justice Department explained in its rulemaking proposal on Friday

The new regulation won’t be final until the public has had 90 days to comment on it. But Sessions called it ‘a critical step in our effort to reduce the threat of gun violence that is in keeping with the Constitution and the laws passed by Congress.’

Despite the national outrage over the Las Vegas shooting last fall, Trump didn’t act until after the shooting deaths of 17 people at a Florida high school in February – a bloodbath in which bump stocks did not play a part.

‘You don’t have to complicate the bill by adding another two paragraphs. We’re getting rid of it,’ he told a bipartisan group of U.S. senators at the White House in late February. ‘We can do that with an executive order.’

‘I’m going to write the bump stock essentially, write it out. So you won’t have to worry about bump stocks. Shortly that will be gone. We can focus on other things.’

Reversing the ATF’s 2010 decision could prompt manufacturers of bump stocks to sue in court, casting the move as an admission that the original ruling was legally flawed.

The sale of machine guns in the U.S. has been limited to law enforcement and the military since 1968.