‘No human being would want to live there’: Trump calls Democrat Congressman Elijah Cummings a ‘brutal bully’ and claims his Baltimore district is a ‘disgusting, rat infested mess’ that is ‘far worse’ and ‘MORE dangerous’ than the southern border

President Donald Trump has slammed Rep. Elijah Cummings as ‘a brutal bully,’ saying that the congressman’s Baltimore district is a ‘rat and rodent infested mess.’

Trump’s remarks in a series of tweets from the White House on Saturday morning referenced the House Oversight Committee Chairman’s harsh remarks at a hearing earlier this month.

It also follows Cummings’ move to subpoena new White House records on Thursday, and a Saturday morning segment on Fox and Friends contrasting Cumming’s concern for migrants at the border with conditions in his own district.

President Donald Trump has slammed Rep. Elijah Cummings (above) as ‘a brutal bully,’ saying that the congressman’s Baltimore district is a ‘rat and rodent infested mess’ 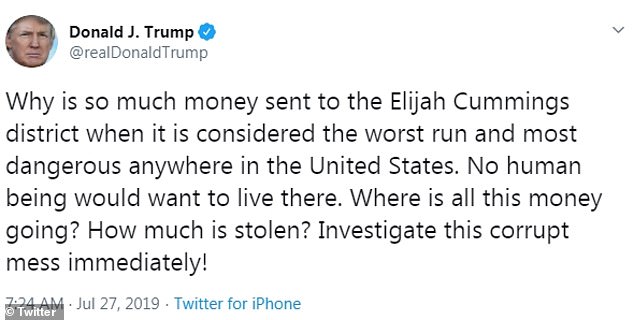 ‘Rep, Elijah Cummings has been a brutal bully, shouting and screaming at the great men & women of Border Patrol about conditions at the Southern Border, when actually his Baltimore district is FAR WORSE and more dangerous. His district is considered the Worst in the USA,’ Trump wrote.

Trump continued: ‘Why is so much money sent to the Elijah Cummings district when it is considered the worst run and most dangerous anywhere in the United States.

‘No human being would want to live there. Where is all this money going? How much is stolen? Investigate this corrupt mess immediately!’ 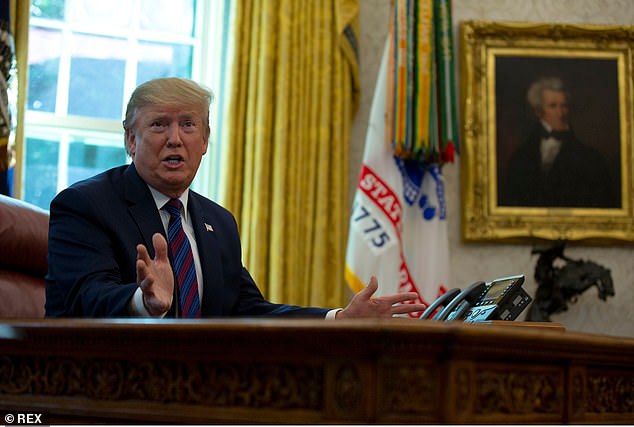 It comes a week after Cummings exploded at Acting Homeland Security Secretary Kevin McAleenan over conditions in facilities used to detain migrants and house unaccompanied migrant children at the southern border.

‘What does that mean, when a child is sitting in their own feces, can’t take a shower!’ Cummings shouted at McAleenan in the July 18 hearing. ‘Come on man, what’s that about?’

Cummings’ remarks were highlighted in a segment on Fox and Friends on Saturday morning.

In the segment, Kimberly Klacik, a Republican strategist from Baltimore, spoke about appalling conditions that residents in parts of the city face.